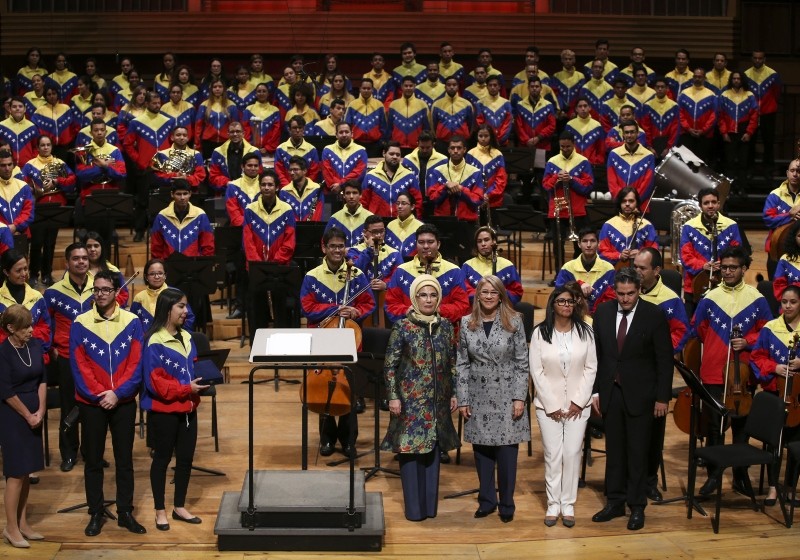 During the ceremony, El Sistema performed a special concert and sang famous Turkish folk songs such as "Üsküdar'a Gider İken" and "Sarı Gelin" as well as the poem "Beraber Yürüdük" which was composed and used as an election song by Erdoğan's Justice and Development Party (AK Party).

Thanking the Venezuelan first lady for the special concert, Emine Erdoğan called the orchestra an important success for Venezuela and an opportunity to discover children's talents from a very young age.

El Sistema is one of the most crucial projects for music in the world, pulling thousands of Venezuelan children from crime and poverty through classical music.

Initiated in 1975 by Jose Antonio Abreu, an economist, pianist and composer from Venezuela who defined the foundation as "a social system fighting against poverty and crime," El Sistema has been providing music education to underprivileged children ever since. According to obtained data, 75 percent of the children currently included in the project live under the poverty line cited by the United Nations.

From its establishment, the network expanded worldwide and contributed to the establishment of similar choirs and orchestras across the globe and received awards from the Royal Swedish Academy and UNESCO.

The foundation has more than 900.000 students between the ages of 5-25 only in Venezuela, while it has many others in different countries from Latin America to Asia. Some 1,681 youth and children's choirs, 1,389 children choirs and 1,983 musical performance groups have been operating as part of the project.

As part of El Sistema, the Music for Peace Foundation, which was established in 2005, provides free music education to underprivileged children with limited opportunities and has even extended its events to different provinces across Turkey.