Turkey, Russia, Iran to present constitutional committee for Syria to UN next week 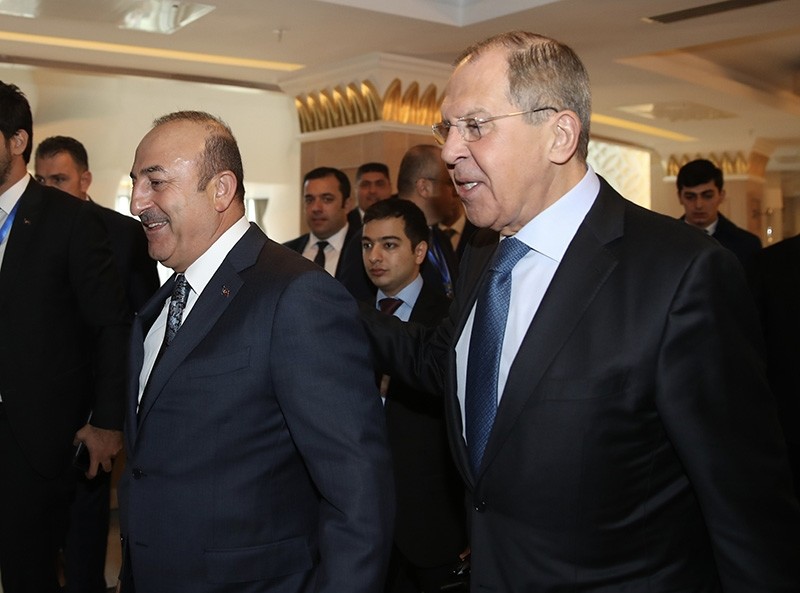 The make-up of a committee meant to draft a new constitution for Syria is nearly complete, with almost all members agreed on, Turkish Foreign Minister Mevlüt Çavuşoğlu and Russian counterpart Sergei Lavrov said Friday.

The announcement comes after Syria's warring sides and mediators last month failed to agree on the formation of the committee, which is seen as key to ending Syria's seven-year civil war.

Speaking at a news conference in Azerbaijani capital Baku on the sidelines of the ministerial meeting of the Black Sea Economic Council (BSEC), Çavuşoğlu said that he and Lavrov discussed various regional issues, including the status of Idlib in northwestern Syria and the forming of a commission to write a new constitution for the war-torn country, during a closed-door meeting.

Separately, Lavrov told reporters that the list of the committee members "is almost ready" and that he expects the committee to convene early next year.

Turkey, Russia and Iran will present the list of candidates for the Syrian Constitutional Committee to U.N. Special Envoy for Syria Staffan de Mistura next week, he added.

Lavrov said he also discussed the issue with his Iranian counterpart Javad Zarif over the phone last night.

"We have already an understanding that the list on which the government of Syria and opposition, with the assistance of Russia, Turkey and Iran worked is almost ready. We will be ready to present this list to U.N. Secretary-General Special Envoy for Syria Staffan de Mistura on behalf of the Syrian parties at the beginning of next week," he said.

Çavuşoğlu also stressed the "close" dialogue between Presidents Recep Tayyip Erdoğan and Vladimir Putin, and added that issues including bilateral trade and the gradual lifting of visa requirements, as well as the situation at the Kerch Strait were also discussed.

Underlining the two countries' regular military, intelligence and diplomatic cooperation on Idlib, he stated that a new summit would not be necessary as there is currently no "extraordinary situation" regarding the opposition enclave.

Thanking Azerbaijan for its term chairmanship of the BSEC, Çavuşoğlu stressed that Ankara would continue to cooperate in joint efforts to resolve issues in the functioning of the organization.

"BSEC needs to be reformed. Outstanding problems must be resolved," he said.

Çavuşoğlu had previously called attention to the payment benefits of BSEC employees, who had not been able to receive insurance payments from the organization.

Russia had also released a statement on the meeting, in which it said various issues including humanitarian relief and the rebuilding of infrastructure in Syria as well as the facilitation of the return of refugees were on the agenda.

Syria has been locked in a vicious civil war since early 2011 when the Bashar Assad's regime cracked down on protesters with unexpected ferocity.