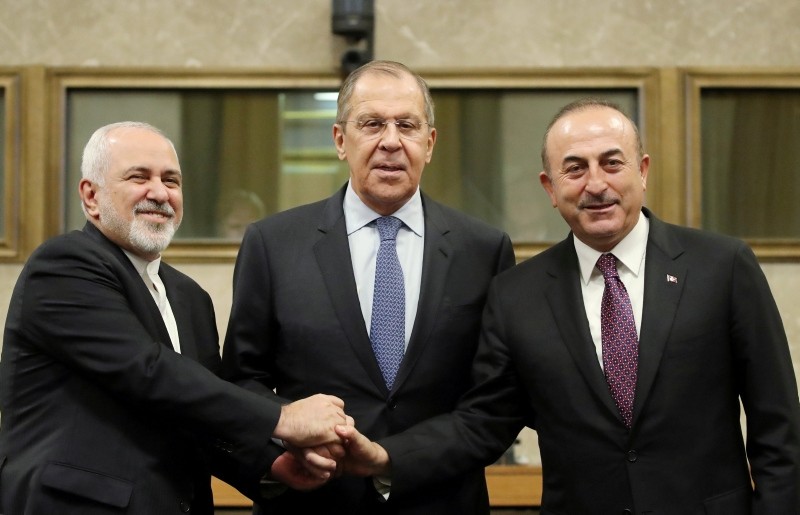 Turkey, Russia and Iran called for the launch of a "viable and lasting Syrian-led, Syrian-owned and U.N.-facilitated political process" after talks in Geneva on Tuesday, saying that a new Syrian Constitutional Committee should convene early next year.

"There is no problem regarding the lists of the [Syrian] regime and the opposition for the constitutional commission," Mevlüt Çavuşoğlu told reporters following a trilateral meeting between the foreign ministers and U.N. Special Syria Envoy Staffan de Mistura at the U.N. offices.

He said that guarantor countries of the Astana process and the U.N. are working together on the names that civil society had suggested for the commission.

Çavuşoğlu added that they also discussed the commission's procedural rules, and they are close to a concluding this.

He said the three countries would step up their efforts to see the commission formed "as soon as possible".

"We foresee the first meeting of this commission in the first month of next year," he said.

"Today's meeting is a sign of how important the Astana and Sochi process is for a political solution in Syria and that it has begun to produce concrete results," he said, adding that Turkey will continue contributing to the process as an important actor.

In a joint statement read out by Russian Foreign Minister Sergei Lavrov after the trio met U.N. Special Envoy Staffan de Mistura, the ministers said that the work of the new body "should be governed by a sense of compromise and constructive engagement".

The ministers also "reaffirmed their strong commitment to the sovereignty, independence, unity and territorial integrity" of Syria and called on all sides to respect those principles.

De Mistura stayed away from their press event and was to address reporters separately.

Last Friday, Russian Foreign Minister Sergey Lavrov said that Russia, Turkey and Iran will present a list of candidates for the commission to the U.N.

The constitutional committee that will discuss the reform process is to be composed of government and opposition representatives, as well as a group of civil society figures selected by the United Nations.

Disagreements about this third group had until now been holding up the process to set up the committee.

Russia and Iran have backed Bashar Assad and his regime during nearly eight years of civil war, while Turkey supports the opposition.