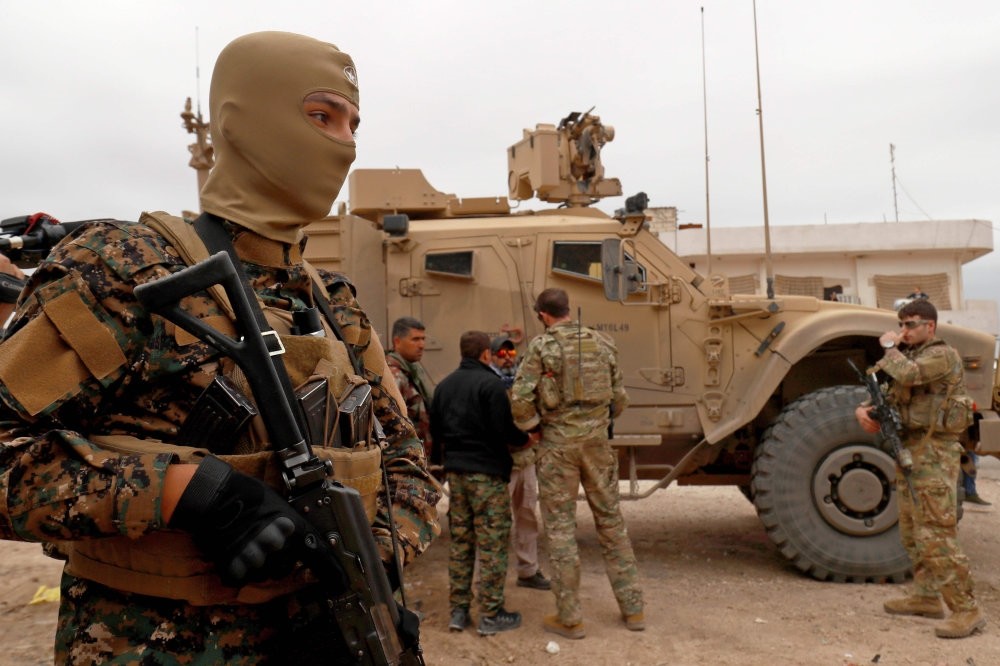 Over the years, Ankara has followed a very consistent policy regarding Washington's activities in Syria, underlining numerous times that supporting one terrorist organization, the YPG, to defeat another, Daesh, is useless. Although the threats from the terrorist elements persist, Turkey's firm stance finally got results on Wednesday, as the U.S. decided to withdraw from the country

In the face of Turkey's insistent diplomacy, which is based on a vocal criticism questioning Washington's fluctuating policy and inappropriate alliances with terrorist organizations in Syria, the United States finally came to a crossroads, announcing its intention for full troop withdrawal from the war-torn country. The U.S.' policies in Syria, particularly its support to the PKK's Syrian affiliate, the People's Protection Units (YPG), have deeply undermined the ties of the allies, raising questions in Ankara and among other regional powers about the real objective of Washington, due to its built up presence and increasing cooperation with the YPG, despite the unequivocal defeat of Daesh.

According to many pundits, Turkey's firm position against the PKK-affiliated terrorist organizations and its recent announcement of a possible cross-border operation to eradicate the YPG threat is one of the main factors that forced the U.S. to take a new step to prevent a direct confrontation with its NATO ally. "Turkey's insistence and firm stance have definitely pushed the U.S. to a crossroads. As its NATO ally, Turkey wanted to know the position of the U.S. toward the YPG. Considering its long-term objectives, the U.S. did not want to lose Turkey," Hüsamettin İnaç, the chairman of Dumlupınar University's Department of Political Science and International Relations, told Daily Sabah.

He added that Turkey previously expressed its concerns on the U.S.' steadfast support to the YPG, which seeks to accomplish separatist agendas in Syria.

Indicating the role of Turkey's increasing criticism over the U.S.' decision, Reuters reported on Wednesday that a U.S. official stressed Washington's decision to pull troops out of Syria has come after a phone call between President Recep Tayyip Erdoğan and his U.S. counterpart Donald Trump.

"Everything that has followed is implementing the agreement that was made in that call," he said. The time frame for U.S troop pullout from the country is expected to be between 60 to 100 days, the official added.

Announcing the underlying reason for the U.S. decision to pull out, Trump said in a video posted Wednesday evening on Twitter, "We have won against ISIS [Daesh]."

The U.S. president underscored that the only reason of the U.S. to be in Syria was to defeat Daesh and it has now accomplished this mission.

In relation to the issue, Erdoğan previously stressed last week that Daesh have been substantially defeated in Syria pointing out that there is no reason left for the U.S.' support to the YPG.

It has been reported that the U.S. still has about 2,000 troops in Syria, many of whom working in close cooperation with Syrian Democratic Forces (SDF), which is dominated by the YPG.

Russia's first reaction to the U.S.' decision came from President Vladimir Putin yesterday, who said he agreed with Trump that the Daesh terrorist group has been defeated.

Putin underscored, "I don't know what the U.S. withdrawal from Syria means, Americans have been in Afghanistan for 17 years and every year they say they're withdrawing."

On the other hand, some allies of the U.S. in the coalition against Daesh, have warned Washington that the Daesh threat has not been totally eradicated.

France said yesterday that it will maintain its participation in the coalition fighting the Daesh terrorist group in Syria after Trump ordered American troops home.

"For now, of course we remain in Syria," France's European Affairs Minister Nathalie Loiseau said on CNews television, adding "the fight against terrorism is not over."

"It's true that the coalition has made significant progress in Syria, but this fight continues, and we will continue it," she said.

French Defense Minister Florence Parly also said on Twitter yesterday that the group "has not been wiped of the map, nor have its roots."

Statements contradicting the remarks of Trump also came from the U.K. saying that Daesh remains a threat even though it holds no territory. British Defense Minister Tobias Ellwood answered the tweet of Trump on Wednesday by saying, "I strongly disagree. It has morphed into other forms of extremism and the threat is very much alive."

The U.S. president's move also drew some criticism from some senators who sent a letter to him on Wednesday asking to reconsider his decision.

"We write today to express our concern regarding your administration's consideration to withdraw U.S. forces from Syria," the senators wrote. "We believe that such action at this time is a premature and costly mistake that not only threatens the safety and security of the United States, but also emboldens ISIS, Bashar Assad, Iran and Russia," he added.

Defending the decision, Trump said yesterday in a tweet that, "Getting out of Syria was no surprise. I have been campaigning on it for years, and six months ago, when I very publicly wanted to do it, I agreed to stay longer."

"Does the U.S. want to be the policeman of the Middle East, getting nothing but spending precious lives and trillions of dollars protecting others who, in almost all cases, do not appreciate what we are doing?" Trump further asked.

Aside from the debates claiming that the fight against Daesh is not over, there have also been some arguments suggesting that the following the withdrawal of the U.S., other actors on the ground such as Russia and Iran might strengthen their hands.

In relation to the issue, Israel's envoy at the U.N., Danny Danon, also voiced concern over the American move later Wednesday. Speaking at a U.N. Security Council session, the Israeli ambassador said that while Israel respected the U.S.' decision it still had its own concerns about the situation in Syria.

Israel's Prime Minister Benjamin Netanyahu further said yesterday that his country will escalate its fight against Iranian-aligned forces in Syria after the U.S. withdrawal.

"We will continue to act very aggressively against Iran's efforts to entrench in Syria," he said in a statement.

"We do not intend to reduce our efforts. We will intensify them, and I know that we do so with the full support and backing of the United States," he indicated.

The withdrawal of the U.S. also means that the YPG will probably be left without substantial support from the U.S. amid Ankara's decision to target the terrorist organization.

Meanwhile, according to the website of the London-based Syrian Human Rights Observatory, the U.S. commanders informed senior YPG figures on withdrawing from all the regions to the east of the Euphrates.

Commenting on Turkey's upcoming steps, İnaç stated that "the withdrawal of the U.S. might also open the way for Turkey to target the terror group posing security threats."

While stressing that the territorial integrity of Syria must be protected, Turkey has been also saying that it will not allow the presence of the terror groups along its border in line with its right to self-defense.

In a press conference in Ankara yesterday with Erdoğan, Iran's President Hassan Rouhani said that Tehran agrees with Ankara on protecting Syria's territorial integrity. He added that next trilateral Syria meeting between Ankara, Tehran, and Moscow will be held in Russia.

Erdoğan also said during the conference that Turkey and Iran has many joint steps to take for regional security and put an end to the clashes.