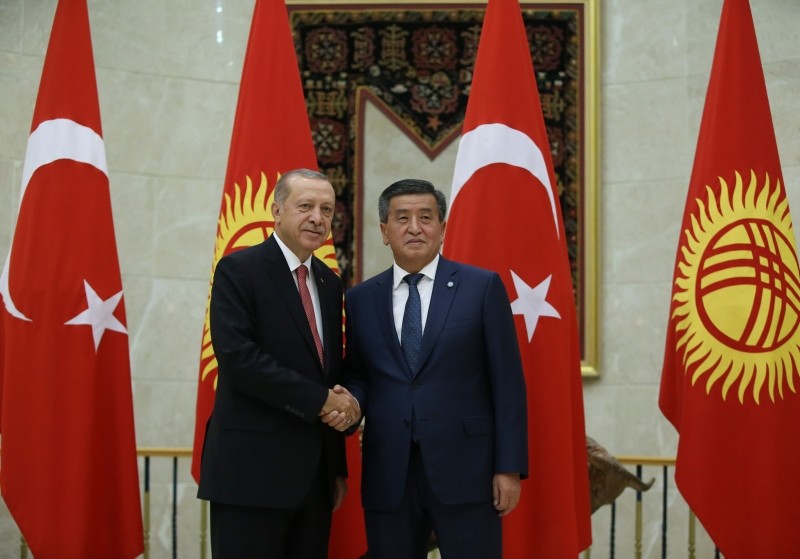 Kyrgyzstan's Foreign Ministry on Thursday named the "new impulse" in Turkish-Kyrgyz cooperation among the 10 most important developments in the Central Asian country's foreign policy in 2018.

The ministry highlighted the busy diplomatic traffic between Ankara and Bishkek to stress the increased cooperation in 2018.

Kyrgyz President Sooronbay Jeenbekov visited Turkey twice this year. Jeenbekov made a working visit on April 9 and 10 and three months later, on July 9, he came to Ankara to participate in President Recep Tayyip Erdoğan's inauguration ceremony.

On Sept. 1 and 2, Erdoğan made a two-day state visit to Kyrgyzstan. During his stay, the Turkish president held talks with his Kyrgyz counterpart, co-chaired the 4th Meeting of the Turkey-Kyrgyzstan High-Level Strategic Cooperation Council and participated in the Turkey-Kyrgyzstan Business Forum. Six bilateral agreements were signed during Erdoğan's visit.

Erdoğan and Jeenbekov expressed their commitment to raising the annual bilateral trade volume to $1 billion, with emphasis on conducting trade using domestic and national currencies.

Ankara and Bishkek also stepped up efforts to eliminate the presence of the Gülenist Terror Group (FETÖ) in Kyrgyzstan, where the terrorist group still maintains a significant presence.