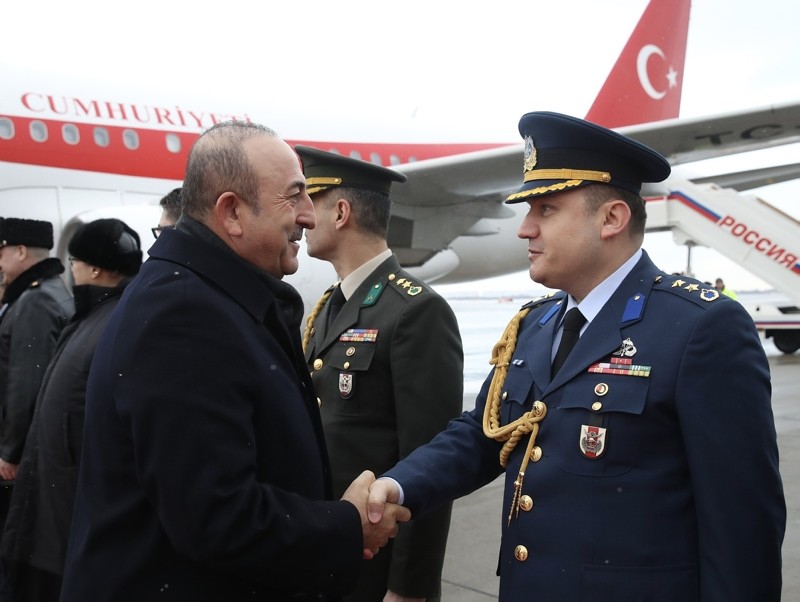 A high-ranking Turkish delegation, led by Foreign Minister Mevlüt Çavuşoğlu, arrived in Moscow on Saturday for talks on Syria with their Russian counterparts.

"We reviewed the steps we took with the Sochi process and what steps we will take from now on regarding Syria," Çavuşoğlu said after the 1.5-hour meeting with Russian foreign and defense ministers, adding that Turkey and Russia share the common goal of clearing all terror organizations from Syria.

Çavuşoğlu said that Turkey will continue close cooperation with Russia and Iran on Syria and regional issues.

Headlining the meeting were the search for solutions to humanitarian issues, including the repatriation of refugees, the situation on the ground after the U.S. withdrawal and the launch of the political process.

"First, we discussed solutions to humanitarian issues, the creation of conditions for the return of refugees," Russian Foreign Minister Sergei Lavrov said, adding: "Special attention was paid to the new situation developing in connection with the U.S. military withdrawal from Syria."

"And an understanding was reached on how the military representatives of Russia and Turkey will continue to coordinate their steps on the ground amid the new conditions, with a view to the final eradication of the terrorist threat on Syrian soil," he said.

"Secondly, concrete measures were outlined to intensify our joint work aimed at creating conditions that will allow more refugees to return to their homes," he said.

"The third theme was the political process."

"It was launched by the guarantor countries of the Astana platform and received additional impetus thanks to the Congress of the National Dialogue in Sochi," he added, stressing that Russia. Turkey and Iran "have done everything they promised to do to form a constitutional committee" expected to start its work early next year in Geneva.

Ahead of the meeting, Russian Defense Minister Sergey Shoygu said that Turkish, Russian foreign and defense ministers will evaluate the implementation of the agreement reached in Istanbul and Idlib and discuss the U.S. withdrawal from Syria.

"We will have the opportunity to discuss once again the situation in the Idlib de-escalation zone and in the demilitarization zone," Shoygu said.

Earlier on Friday the Assad regime said that it entered the town held by the PKK terror group's Syrian affiliate the People's Protection Units (YPG).

The Assad regime army said it now "guarantees full security for all Syrian citizens and others present" in the town, which previously was home to a U.S. military base.

The announcement came moments after YPG terrorists called on regime to take control of Manbij as the countdown for Turkey's crossborder counterrorism operation was underway.

Washington announced last week it will be withdrawing all of its troops from Syria, following a conversation between Erdoğan and U.S. Trump over an imminent Turkish cross-border operation to eliminate PKK-affiliated YPG terror group from northern Syria.