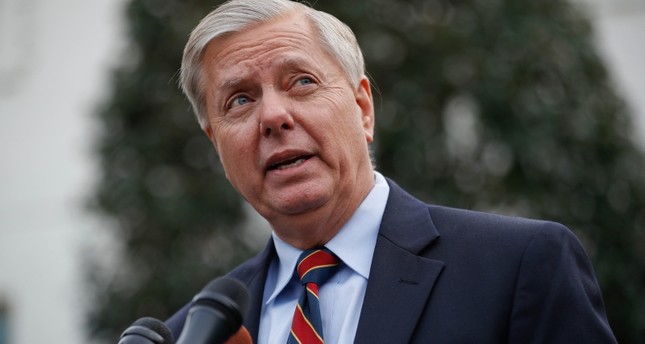 Sen. Lindsey Graham, R-S.C., speaks to members of the media outside the West Wing of the White House in Washington, after his meeting with President Donald Trump, Sunday, Dec. 30, 2018. (AP Photo)

"I think we're in a pause situation," the South Carolina Republican said outside the White House after lunch with the president.

Trump announced earlier this month that he was ordering the withdrawal of all the roughly 2,000 troops from war-torn Syria, with aides expecting it to take place swiftly. The president had declared victory over Daesh in Syria, though pockets of fighting remain.

Graham had been an outspoken critic of Trump's decision, which had drawn bipartisan criticism. The announcement also had shocked lawmakers and American allies, including PKK-affiliated People's Protection Units (YPG), who have fought alongside the U.S. against the Daesh group and face an expected assault by Turkey.

Ankara considers the YPG, which makes up the bulk of the U.S.-backed Syrian Democratic Forces (SDF), a grave threat to its national security.

"I think we're slowing things down in a smart way," Graham said, adding that Trump was very aware of the "plight of the Kurds."

Critics had contended that the U.S. withdrawal would embolden Iran and Russia, which have supported the regime of Bashar al-Assad.

National security adviser John Bolton was expected to travel to Israel and Turkey next weekend to discuss the president's plans with the American allies.

During his appearance on CNN's "State of the Union," Graham previewed his arguments to Trump for reconsidering the Syria pullout.

Graham said Trump was "thinking long and hard about Syria and how to withdraw the forces" after ensuring that Daesh is destroyed, that U.S.-allied Kurdish forces are protected and that "Iran doesn't become the big winner of our leaving."

"I'm going to ask him to sit down with his generals and reconsider how to do this. Slow this down. Make sure that we get it right. Make sure Daesh never comes back. Don't turn Syria over to the Iranians. That's a nightmare for Israel," Graham said.

"And, at the end of the day, if we leave the Kurds and abandon them and they get slaughtered, who's going to help you in the future?" he said. "I want to fight the war in the enemy's backyard, not ours. That's why we need a forward-deployed force in Iraq and Syria and Afghanistan for a while to come."

"He told me some things I didn't know that made me feel a lot better about where we're headed in Syria," the South Carolina lawmaker said.

Turkey's Ambassador to Washington Serdar Kılıç reminded Monday Graham of his speech acknowledging the links between PKK and YPG after the senator mentioned of the YPG as "our allies."

"When you say 'our Kurdish allies,' I am confident that you are not referring to the YPG Mr. Senator. You know better than anyone else in D.C. and have time and again exposed publicly the irrefutable command and control relationship between the YPG and the PKK," Kılıç wrote on Twitter, mentioning Graham and Trump.

Previously in April 2016, Graham had forced former Secretary of Defense Ash Carter to accept that the PKK and the YPG were aligned.

"Yes," replied former Secretary of Defense Carter when Graham asked whether he believed the YPG is "aligned or at least have substantial ties to the PKK."

A Turkish delegation, headed by Deputy Foreign Minister Sedat Önal, will travel to Washington on Jan. 8 to attend a meeting of the Turkish-U.S. High-Level Working Group on Syria.

In August 2018, Önal headed a nine-member delegation for a meeting with Deputy Secretary of State John Sullivan in Washington.

Before the visit, a U.S. that includes FBI agents will reportedly visit Ankara on Jan. 3-4 as part of the joint working group. They expect to exchange notes on criminal charges related to the Gülenist Terror Group (FETÖ).

Meanwhile, U.S. National Security Adviser John Bolton has announced that he will tour Turkey and Israel in January amid the U.S.' planned withdrawal from Syria.

"We will discuss our continued work confronting security challenges facing allies and partners in the region, including the next phase of the fight against [Daesh], as the U.S. begins to bring troops home from Syria," Bolton said on Twitter on Friday.