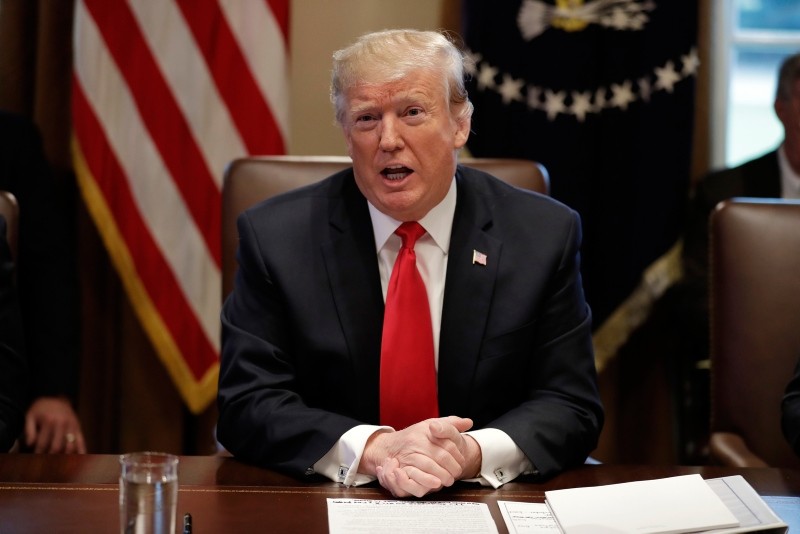 U.S. President Donald Trump said on Wednesday the United States would get out of Syria "over a period of time" and wants to protect the U.S.-backed YPG terrorist group in the country as Washington withdraws troops.

Trump did not provide a timetable for the planned military exit from Syria, which he announced last month against the advice of top national security aides and without consulting lawmakers or U.S. allies participating in anti-Daesh operations.

During a Cabinet meeting at the White House in front of reporters, Trump said he had never discussed a reported four-month timetable for the withdrawal of 2,000 American troops stationed in Syria amid a battle against Daesh militants.

Trump said Syria was lost long ago as he called the U.S. presence in the country a "lost cause."

Trump said the YPG was selling oil to Iran and that the US has asked them to stop.

"The Kurds, our partners, are selling oil to Iran. We are not thrilled about that. I'm not happy about it at all," Trump said.

Former Defense Secretary Jim Mattis announced on Dec. 20 that he was stepping down, but would stay on the job until the end of February. Three days later, Trump said he was replacing Mattis with the second-ranking defense official, Pat Shanahan, on New Year's Day.

Trump said he fired Mattis and the former secretary "couldn't believe" how much federal money Trump had helped secure for the military.

Trump then asked rhetorically "What's he done for me?"

Trump also said he wasn't happy with Mattis' work in Afghanistan. Trump says the U.S. should let the Taliban and Daesh militants fight each other there.