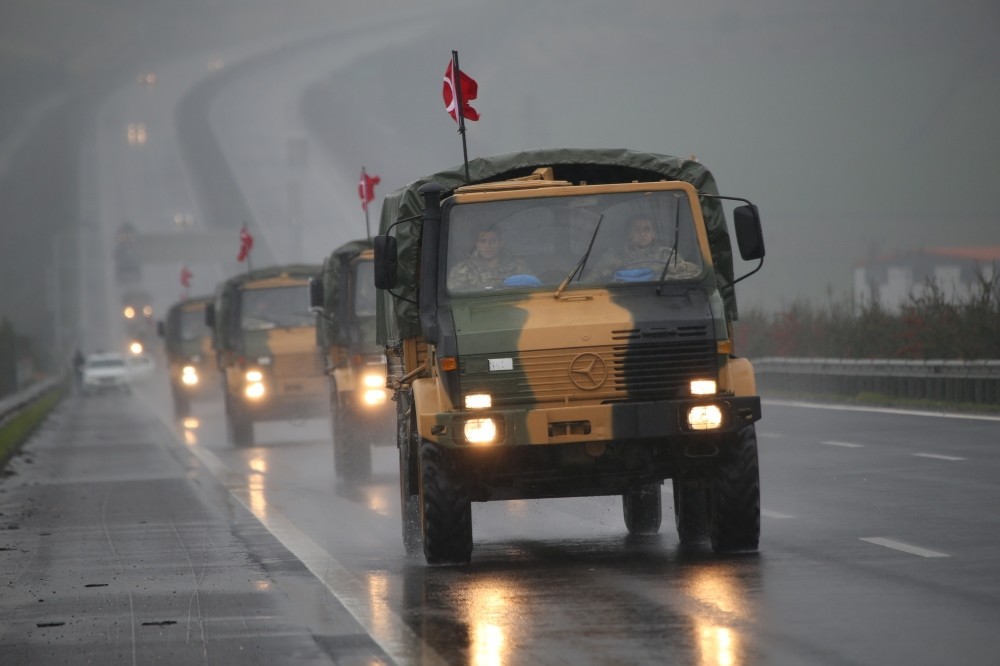 Ankara and Washington will hold a series of diplomatic meetings to discuss the situation in Syria after U.S. withdrawal from the war-torn country

Ankara and Washington will enhance dialogue with high-level talks in order to address the significant issues unfolding in the region and beyond, such as the incidents in Syria, most particularly the U.S.' recent decision to withdraw its troops from Syria as well as the situation in the northern province of Manbij. With the U.S.' recent decision to fully withdraw from Syria raising significant questions about the future polices of the actors on the ground, U.S. National Security Adviser John Bolton is expected to visit Turkey on Jan. 8 for talks on coordinating regional security. Commenting on the upcoming visit, Ömer Özkizilcik, an analyst at the Security Department of the Foundation for Political, Economic and Social Research (SETA) told Daily Sabah that the meeting would shape Ankara's road map in Syria in the upcoming period. U.S. President Donald Trump announced on Dec. 19 the withdrawal of 2,000 troops from Syria. Trump made the decision during a phone call with President Recep Tayyip Erdoğan in which the two leaders agreed on the need for more effective coordination over the civil war-torn country.

Stressing that Ankara and Washington would iron out details over how the U.S.' decision will be implemented; Özkizilcik said, "Washington and Ankara's coordination is necessary in order to prevent other actors' attempts to fill the vacuum left by the U.S. For instance, the strategy in Manbij region after the withdrawal of the U.S. will be discussed during the meeting."

He added that the future of the People's Protection Units (YPG) will also be shaped in the meeting.

In relation to his visit, Bolton tweeted last week, "Looking forward to visiting Israel & Turkey in January. We will discuss our continued work confronting security challenges facing allies & partners in the region, including the next phase of the fight against [Daesh], as the U.S. begins to bring troops home from Syria."

Ali Çınar, the president of the U.S.-based Turkish Heritage Organization, stated that the upcoming talks between Ankara and Washington are significant as the sides will discuss the future of the YPG and the weapons given to the group, the bases the U.S. has in Syria and the steps that will be taken in the fight against Daesh.

"However, Turkey needs to be cautious, observing the implementation of the decision," Çınar said and pointed to the circles that are against the decision in the U.S.

Çınar also reminded readers that Trump will give the Pentagon about four months to fully withdraw from Syria and warned about the extending of that period.

As Trump highlighted previously, Turkey might be expected to take a leading role in the fight against Daesh. "President @RT_Erdoğan of Turkey has very strongly informed me that he will eradicate whatever is left of [Daesh] in Syria....and he is a man who can do it plus, Turkey is right 'next door.' Our troops are coming home!" Trump tweeted on Dec. 24.

​Trump later said the United States would get out of Syria "over a period of time" and wants to protect the terrorist group in the country as Washington withdraws troops. He also added the U.S.-backed YPG militants in Syria were selling oil to Iran and Washington was "not thrilled" about it.

High level officials in Ankara have been stressing that Turkey has been resolute to target both the YPG and the Daesh terrorist group. Turkey's strategies to target the group is expected to be shaped up in aftermath of the enhanced talks with the U.S. and international coalition against the terror group.

"Currently, a new phase has started in the fight against Daesh, accordingly, restoring the stability is more significant than the physical fight. The YPG which has been oppressing the people, fails to restore stability in the regions it controls as attacks have often occurred; this would create an environment in which the Daesh might resurrect," Özkizilcik underlined.

He stated that the actors such as Arab tribes, Free Syrian Army which have been acting in line with Turkey would play role in eradicating Daesh. Given the example of the Euphrates Shield region, Özkizilcik said that there is no Daesh presence, while in the areas controlled by the YPG, Daesh has been conducting attacks."Turkey has strongly fought against the Daesh terror threats and border threats. In Operation Olive Branch, and in the Afrin operation not only the YPG but also Daesh was cleared," Çınar highlighted, saying that Turkey has conducted an active fight against terrorist groups in Syria. He added that in the upcoming period Turkey would be in coordination with the coalition partners.

US delegation in Turkey to also discuss probe into FETÖ

A U.S. delegation is also expected to pay a visit to Turkey today to discuss developments in U.S. probe into Gülenist Terror Group (FETÖ), which orchestrated the 2016 coup attempt and became another significant issue in relations with the U.S.

The delegation is expected include FBI officials who will hold talks with officials from the foreign, justice and interior ministries in the capital Ankara. During their two-day meeting, the delegation will inform Turkish authorities about the U.S.-based probe into the terror group. FETÖ and its U.S.-based leader Fetullah Gülen orchestrated the coup attempt on July 15, 2016, which left 251 people killed and nearly 2,200 injured.

The U.S. remains the main hub of FETÖ activity, where the shadowy group operates hundreds of charter schools and affiliated companies, providing visa and employment opportunities for thousands of its followers. Gülen has lived in self-imposed exile in a secluded compound in the U.S. state of Pennsylvania since 1999. Foreign Minister Mevlüt Çavuşoğlu said last month that the FBI has started working on investigating the FETÖ's network in the U.S. in 15 states and has already made arrests in the state of New Jersey. He added that Turkey has demanded the extradition of 84 people linked to the FETÖ in talks with the U.S.

"We have brought up the issue of 84 people whom we have officially requested to be extradited in every meeting [with U.S. officials]. Our president brought it up in Argentina [at his meeting with Trump on the sidelines of the G20 summit]. Trump specifically said 'we are working for the extradition of the FETÖ terrorist leader.' There is this reality about the FETÖ; there is an ongoing investigation by the FBI in nearly 15 U.S. states. The FBI told us that they have begun to see the dark side of the FETÖ through their findings. Arrests have also been made in some places like New Jersey," Çavuşoğlu said. Commenting on the upcoming talks, Çınar highlighted that the process regarding the issue has been slow, yet that the coordination and bilateral talks are useful. He added that he does not expect any surprise development this year.