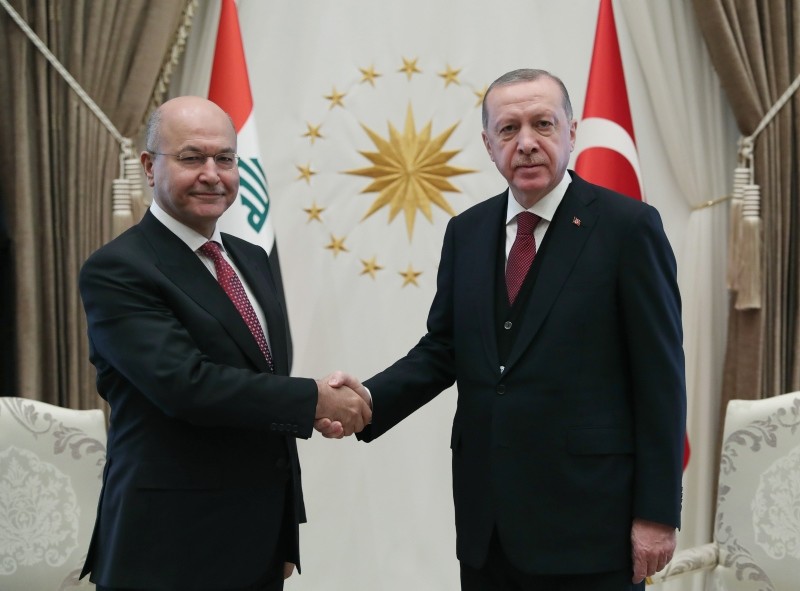 The presidents of Turkey and Iraq highlighted Thursday that the two neighboring countries would enhance efforts for cooperation in every field, particularly considering mutual terror threats and regional developments.

Speaking in a joint press conference in Ankara with his Iraqi counterpart Barham Salih, President Recep Tayyip Erdoğan said that Daesh, the PKK and Gülenist Terror Group (FETÖ) terrorists pose threats to both Turkey and Iraq, underlining that both countries are aware of the significance of working together in the fight against terrorism.

Erdoğan highlighted: "Turkey's Iraq policy is based on territorial integrity and ensuring stability and security."

During the first official visit of Salih to Turkey, the two sides discussed all aspects of bilateral relations and evaluated future steps to be taken in various fields, including counterterrorism, the reconstruction of Iraq after the defeat of Daesh and the economy.

The fight against terrorism has been one of the prominent issues in relations between the two countries. Turkey has been repeatedly calling on its neighbor to increase cooperation to prevent terror threats posed against the country. Exercising its right to self-defense, Turkey has been regularly conducting air strikes that target PKK terrorists in northern Iraq. In the latest move, Iraq's foreign ministry in December summoned Turkey's ambassador in Baghdad, Fatih Yıldız, to protest Turkey's airstrikes against the PKK in Sinjar and Mount Karajak regions in December.

According to a statement issued by the Ministry of Defense, the air raid was conducted to preserve national security and prevent terrorist attacks coming from northern Iraq in line with the right of self-defense stipulated in Article 51 of the United Nations Charter. The utmost attention was exercised to avoid any harm to civilians' safety and property, the Turkish military said.

To ensure its national security, Ankara has been signaling that it would continue its fight against the PKK, stressing that the group is no different than Daesh.

Following the defeat of Daesh, Iraq has been facing the task of rebuilding the war-torn country and restoring security. As a neighboring country of Iraq, Turkey has announced that it will provide the necessary support in efforts for reconstruction.

"Turkey is ready to contribute to infrastructure and development projects in Iraq," Erdoğan said and underscored that the delegations discussed possible projects in Thursday's meeting.

In February, various countries pledged billions of dollars in loans and investment for the reconstruction of Iraq at the international donors' conference in Kuwait City. Turkey pledged $5 billion in loans and investments, making the country one of the top contributors. Accordingly, Turkey will help redevelop the cities of Kirkuk, Mosul, Tal Afar, Baghdad, Irbil and Sulaymaniyah through the Turkish International Cooperation and Development Agency (TİKA) to help Iraqis return to their homes.

"Iraq expects Turkey's contribution in reconstructing terror-free regions in the country," Salih said, stressing Baghdad's expectations. "Iraq is now entering a new phase," he said and underlined that it is now the time to bring stability to the region and reconstruction.

Erdoğan also said that the delegations would accelerate efforts for infrastructure projects.

Commenting on the economic ties between the countries, Erdoğan said that bilateral trade reached a record level with $16 billion in 2013 and he called for increasing it to $20 billion. Underlining that High Level Strategic Council meetings with Iraq could not be held due to the elections in Iraq, Erdoğan said that they are willing to hold the meeting this year. He stressed that the two countries can do a lot of things in the defense industry.

In relation to Iraq's water problem, Erdoğan stressed that there are serious problems in water management and added if the necessary steps are taken the problem might be solved in a couple of years as this year Iraq received high precipitation.

Erdoğan said that he would send his special envoy to Iraq to talk with officials to take steps accordingly.

"We do not want the water issue to remain as a problem between the countries," Salih said and added that they consider Erdoğan's move to appoint a special envoy as significant for the resolution of the problem.

Drought and low precipitation have been a significant problem in Iraq. Last summer, farmers and citizens in the areas of Salahiya, Mhanawiya and al-Shamiya in Diwaniyah province and Basra province protested declining water-related services and the Agriculture Ministry's decision to ban the planting of rice, white and yellow corn, sesame, cotton, millet and sunflower seeds.

Turkey depends on water from the Tigris River to fill a reservoir behind its Ilısu Dam near the Iraqi border. Iraq has asked for a larger share of the river's flow amid shortages, particularly in the southern province of Basra.

Separately, Foreign Minister Mevlüt Çavuşoğlu met one-on-one with his Iraqi counterpart Mohamed Ali Alhakim at the State House of Foreign Affairs on Thursday. The two discussed bilateral issues, focusing on the fight against terrorism and the reconstruction of Iraq.