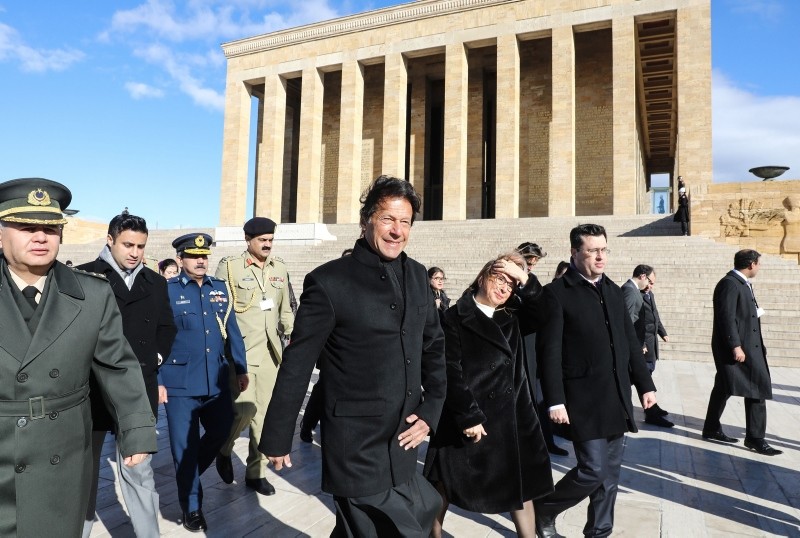 Pakistani Prime Minister Imran Khan visited Anıtkabir, the mausoleum of the Turkish Republic's founder, in capital Ankara on Friday as part of his two-day visit to Turkey.

Khan, who is on an official visit to Turkey upon the invitation of President Recep Tayyip Erdoğan, showed his respects by laying a wreath on the mausoleum. He was accompanied by the Turkish Minister of Commerce Ruhsar Pekcan and signed the Anıtkabir private guest book following the wreath-laying ceremony.

"It is my honor to be here to pay homage to Gazi [Veteran] Mustafa Kemal Atatürk, one of the greatest statesmen and visionary leaders of the 20th century. [Atatürk] led the Turkish people in one of the most difficult times, and changed the history of Turks as well as the world, and has been a source of inspiration for those struggling against colonialism throughout the world. He was an epitome of courage, strength, resistance, tolerance and wisdom," he wrote in the book.

He added: "Pakistan's founder Quaid-i Azam [Great Leader] Muhammad Ali Jinnah referred to Gazi Mustafa Kemal Atatürk as one of the greatest people who has ever lived."

Saying that he expressed his deepest admiration and respect to Atatürk on behalf of the Pakistani government and its people, Khan concluded his words, saying: "His glorious struggle for the independence and unity of the Turkish nation will forever remain a golden chapter in the annals of history."

Khan and the Pakistani delegation landed Thursday in central Turkey's Konya province where they paid a visit to museum dedicated to Mevlana Jalaladdin Rumi, the famed 13th-century Sufi Muslim poet and scholar.

He was greeted by Pekcan at capital Ankara's Esenboğa Airport and later attended a dinner organized jointly by the Union of Chambers and Commodity Exchanges of Turkey (TOBB) and Pakistan's embassy in Ankara.

Khan has also met with the representatives of the Foreign Economic Relations Board (DEIK) in Ankara where he is set to make several other official contacts. He will meet with Erdoğan later on Friday at the presidential palace.