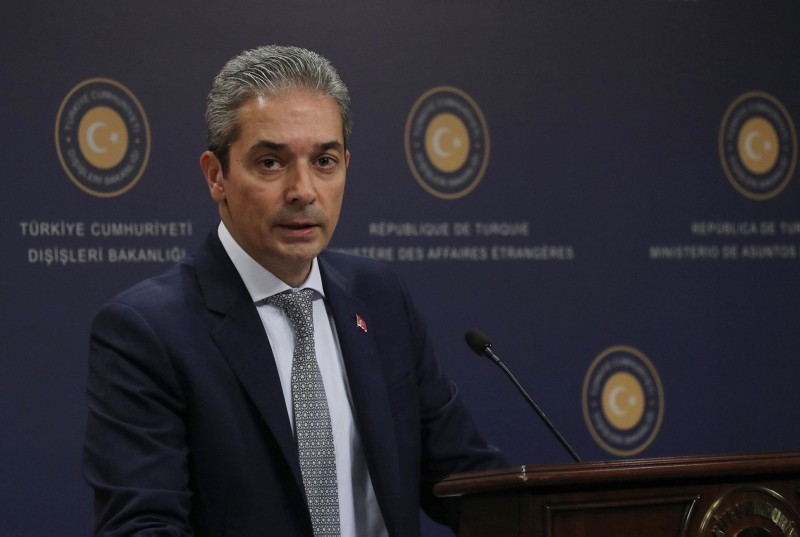 Ankara strongly condemned on Friday statements by U.S. Secretary of State Mike Pompeo over the country's approach to the PKK-affiliated People's Protection Units (YPG), underlining that Turkey embraces all Syrian people from every origin, except terrorist organizations which cannot be equated with the Kurds.

"We deny the content and the tone of [Pompeo's] remarks in regard to our county. Portraying our country, which in fact embraces all Syrian people, including the Kurds, and its fight against terrorist organizations, as if it targets a specific community in Syria, is unacceptable," Foreign Ministry spokesman Hami Aksoy said in a written statement.

Pompeo affirmed on Thursday that the Trump administration wants to protect the YPG against an upcoming Turkish offensive east of the Euphrates contrary to the withdrawal decision that many interpreted as a step to avoid losing its NATO ally, Turkey.

"We still have lots of things to work with on the Turks. Not only the withdrawal, but also all of the other elements that the president laid out: The importance of ensuring that the Turks don't slaughter the Kurds... All of those things are still part of the American mission set," Pompeo said on Thursday, marking the third time in less than a week that a senior U.S. official has expressed commitment to protecting the YPG terrorist organization.

Aksoy underscored that painting the YPG and Syrian Kurds with the same brush is a sign of a lack of information on the side of the U.S., "If not deliberate."

Pointing out that Ankara is determined to continue its fight against the YPG and Daesh to eliminate existential threats and maintain its territorial integrity, Aksoy highlighted that Turkey will also continue to protect the rights of Syrian Kurds in its efforts to reach a political solution for the Syrian civil war.

Aksoy also said Turkey strongly condemned the U.S. seeing the YPG, which Ankara regards as the Syrian branch of the PKK terror organization, as its partner in the fight against Daesh.

"Turkey will resolutely continue to fight the PKK/PYD/YPG and Daesh terrorist organizations, which threaten Syria's political unity and territorial integrity, and pose an existential threat to its national security," Aksoy said.

He added that everybody should remember Turkey currently hosts hundreds of thousands of Syrian Kurds who fled from the atrocities of the terrorist organization and cannot return to their homes due to the YPG's oppressive policies.

The close U.S. partnership with the YPG since President Obama's administration has always been a sticking point in Washington-Ankara relations. Turkey sees the YPG as an extension of the PKK, that has claimed the lives of more than 40,000 people in its 30-year terror campaign against Turkey. The U.S., however, while listing the PKK as a terrorist group, opted to continue its steadfast militarily support for the terrorist organization under the pretext of fighting Daesh despite warnings that the YPG does not represent Syrian Kurds.

In the wake of the YPG threat near its borders, Erdoğan and many other Turkish officials vowed to launch an operation east of the Euphrates, which is under the YPG's de facto control, "very soon." Following Trump's announcement of the withdrawal, the long-awaited operation was put on hold until U.S. troops leave the region. However, Turkey has been mobilizing its troops to be ready for every possibility.

US backtracks to incoherent policies in Syria

As a matter of fact, Turkey and the U.S. increased diplomatic talks to reach a mutual understanding to coordinate Washington's decision to pull out its troops from Syria, something Ankara has been urging for some time now.

Prior to his decision on December 19, Trump spoke with Erdoğan. Turkish officials say Erdoğan convinced his American counterpart that Ankara could take care of the remaining Daesh elements in Syria during a phone conversation on December 14. After Trump's announcement, Secretary of Defense James Mattis sent in his resignation letter.

Yet, President Donald Trump's administration is seemingly backpedaling to abrupt shifts in its contradictory policies in Syria.

Normalization in Washington-Ankara ties via these diplomatic negotiations began to be fruitful with the U.S.' recent moves on the Gülenist Terror Group (FETÖ) and its swift change in Syria policy. A U.S. delegation came on Tuesday to Turkey to discuss developments in the U.S. probe into FETÖ, the group behind the 2016-defeated coup in Turkey. U.S. National Security Adviser John Bolton also announced Friday that he is on his way to Israel and Turkey "to discuss the withdrawal of U.S. troops from Syria and how Washington and its allies intend to counter Iran's malign behavior in the region."

However, the Trump administration never ceases to puzzle the international community with its swift, unpredictable policies. Just two weeks after catching U.S. lawmakers and many military leaders by surprise with its decision to pull out 2,000 troops from Syria within a month on the grounds that the "fight against Daesh is over," Trump now has cold feet with regard to implementing its withdrawal plan.

First, Republican Sen. Lindsey Graham, a well-known Trump ally, hinted on Dec. 30 that the pullout will be slowed down as opposed to a specific 30-100 day timeline saying, "I think the president's very committed to making sure that when we leave Syria, that ISIS is completely defeated."

Later, Trump told reporters on Wednesday that Iranian leaders "can do what they want" in Syria much to the dismay of U.S. foreign policymakers who long have been trying to thwart a permanent Iranian presence in the war-torn country.

Trump's inconsistent policies also reverberate in Washington's cooperation with the YPG, its long-time partner on the ground since the Obama administration, in Syria as well amid domestic pressures to maintain U.S. backing to the terrorist organization.

In addition to Pompeo's remarks suggesting that they will continue to protect the YPG against Turkish operations, Graham underscored this week that the U.S. is planning to talk to Turkey about creating a "buffer zone" along the border so that Ankara's security concerns regarding the YPG are met, while at the same time "protecting" its partners on the ground.

Some pundits have been indicating that the reason for the Trump administration's backpedaling on Syria lies behind mounting internal pressures and the embarrassment that Washington will possibly face if the regime takes over YPG-held areas.

U.S. troops in Syria have been cooperating with the YPG/PKK to fight Daesh, against Turkey's objections that using one terror group to fight another makes no sense. In the last two years, Turkey has successfully carried out two counter-terrorism operations in Syria -- Operations Euphrates Shield and Olive Branch -- to eradicate the presence of YPG/PKK and Daesh terrorists near Turkey's borders, and a third one is expected, east of the Euphrates River.