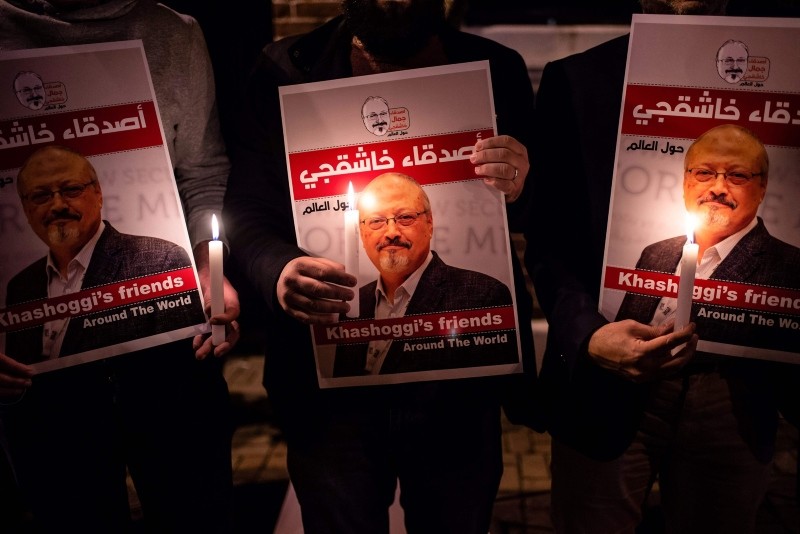 People hold posters picturing Saudi journalist Jamal Khashoggi and candles during a gathering outside the Saudi Arabian consulate in Istanbul, on Oct. 25, 2018. (AFP Photo)
by Daily Sabah with Reuters Jan 04, 2019 12:00 am

The United Nations said on Friday that it could not assess the fairness of a trial taking place in Saudi Arabia related to the killing of journalist Jamal Khashoggi, but that in any case it was "not sufficient," while also urging an international probe over the murder.

A spokeswoman for the U.N. human rights office, Ravina Shamdasani, when asked about reports that a Saudi prosecutor had sought the death sentence for five suspects linked to the Oct. 2 killing, reiterated the office's call for an independent investigation "with international involvement."

In response to a question about seeking of death sentences for five suspects by a Saudi prosecutor, she said the U.N. rights office always opposed the death penalty.

Previously on Thursday, the kingdom's attorney general sought the death penalty for five of the 11 defendants charged with the murder of Khashoggi as their high-profile trial opened in Riyadh.

All 11 accused were present with their lawyers at the opening hearing in the capital, according to a statement by Attorney General Saud al-Mujeb carried by the official Saudi Press Agency. The statement added that the prosecution demanded death sentences for five suspects, adding that the interrogation of the suspects continues.

The bill of indictment against the accused was read out at the procedural session. The defendants who are in custody asked for time to examine the charges leveled against them, according to the statement. No date has been set for the next hearing.

Turkish officials have previously said they shared evidence with Saudi Arabia and other nations over Khashoggi's killing, and repeatedly called for the suspects to be extradited to Turkey, where the crime was committed.

Khashoggi, an occasional contributor to The Washington Post, had written columns critical of Saudi Arabia's powerful Crown Prince Mohammed bin Salman. He went missing after entering the Saudi Consulate in Istanbul on Oct. 2.

The kingdom initially denied Khashoggi was killed. After producing various contradictory explanations, Riyadh acknowledged weeks later that he was killed inside the consulate building, blaming the act on a botched rendition operation.