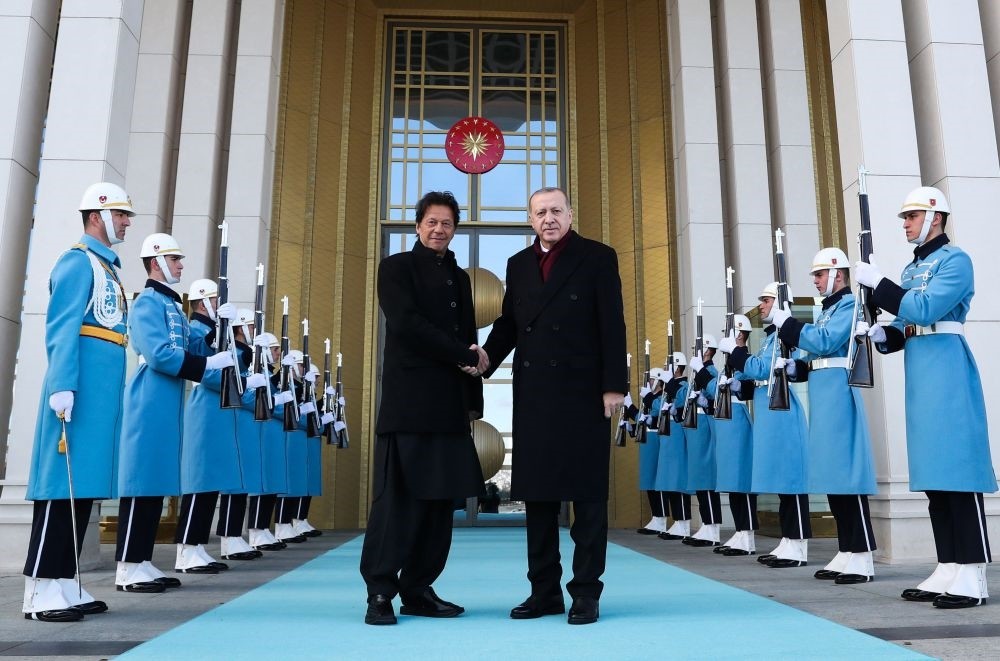 President Recep Tayyip Erdou011fan (R) welcoming Pakistan's Prime Minister Imran Khan (L) ahead of their meeting at the Presidential Complex in Ankara, on Friday.
by Mustafa Kırıkçıoğlu Jan 05, 2019 12:00 am

Imran Khan's visit is expected to further strengthen the already deep Turkish-Pakistani ties thanks to recent developments, especially those concerning the fight against FETÖ

Pakistani Prime Minister Imran Khan's visit to Turkey and Islamabad's decision to hand over schools affiliated with the Gülenist Terror Group (FETÖ) prior to his arrival will further boost the already strong relations between the two countries, experts have said.

Khan arrived in Turkey on a landmark two-day visit to Turkey on Thursday, following an invitation from President Recep Tayyip Erdoğan after the prime minister took office last August.

Also on Thursday, Turkey's Maarif Foundation took over the management of FETÖ-linked schools in Pakistan, following a decision by its Supreme Court late December to designate FETÖ as a terrorist organization.

"I think it is a good start by the new government to have even better relations with Turkey," Shehryar Khan, an academic at Islamabad's Iqra University, told Daily Sabah.

On Friday, President Erdoğan hailed Pakistan's Supreme Court for recognizing FETÖ as a terrorist organization, during a joint press conference with Khan in Ankara. "Turkey will continue to be in solidarity with Pakistan," President Erdoğan said. Prime Minister Khan, on the other hand, said that from now on Pakistan and Turkey will be much closer and the country wants to take relations with Turkey to a "much higher" level.

The high court ordered the transfer of all of FETÖ's "movable and immovable assets," including schools, colleges, education centers and other similar entities, to the Maarif Foundation. After the ruling, Pakistani Interior Ministry declared the Pak-Türk Çağ Education Foundation a terrorist organization and banned its activities in the country.

"The decision, which came after a long process, started with an appeal of a Turkish lawyer to the Pakistani High Court. For the Turkish side, it was elating to see an indication of deep ties between the two countries and Imran Khan's strong friendly rhetoric," Aslan Balcı, a board member of the South Asia Strategic Research Center (GASAM), told Daily Sabah.

There were 28 schools run by FETÖ-linked organizations in Pakistan. Following Turkey's requests, Pakistan asked 108 teachers working at the FETÖ schools to leave the country with their families in November 2016, just four months after the July 15, 2016 coup attempt, which was masterminded by U.S.-based FETÖ leader Fetullah Gülen.

The decision included the teachers working at the 23 schools and their families, totaling around 400 people. Trustees were appointed to the schools to prevent any interruption in education.

Balcı underlined that the Pakistani court did its part by handing over the schools and now "it is time for the Maarif Foundation to carry out the responsibility of giving high-quality educational services."

The court's decision was interpreted as a significant gesture, as it made Pakistan the only country, other than Turkey, to declare FETÖ a terrorist organization.

Often labeled as "brotherly countries" bound by strong historical ties, Ankara and Islamabad stand on the same page on many critical domestic and international issues.

"Pakistan and Turkey enjoy unparalleled historic ties based on a common religious and cultural legacy that dates back centuries. The two countries have excellent political, economic, defense, cultural and people-to-people relations that continue to grow from strength to strength with each passing year," said Imran Khan's spokesperson before the premier's visit to Ankara.

In an interview with Daily Sabah last October, Pakistani President Arif Alvi highlighted the solid ties between the two countries, from the fight against terrorism to commerce and military, "grown on a framework of mutual trust."

He also mentioned how both countries have supported each other on vital issues. "Turkey has supported Pakistan's position on Kashmir, and Pakistan has supported Turkey on the Cyprus issue. Pakistan also stood by Turkey's democracy in 2016."

Indicating that the Pakistani prime minister would want Ankara's help as Islamabad faces an economic crunch, Shehryar Khan said that Pakistan has been turning to friendly countries for financial support due to tough International Monetary Fund (IMF) conditions.

"He would seek Turkey's support to bring in investments and also may offer joint projects especially in CPEC [China-Pakistan Economic Corridor] projects," he said, adding that Turkey would also be briefed on the developments in the Afghan peace process.

Balcı said that Imran Khan has formed a proper cabinet to fulfill his election promises, including fighting corruption and poverty. He added that the two countries can share experience and opinion on many issues. "[Imran] Khan's popularity, especially among young Pakistanis, is very similar to President Erdoğan's fame in Turkey. He also had great achievements in sports. But now, he is in the political arena and a pile of problems is ahead of him," he said.