'Turkey has a plan to restore peace in Syria,' Erdoğan says in NYT article 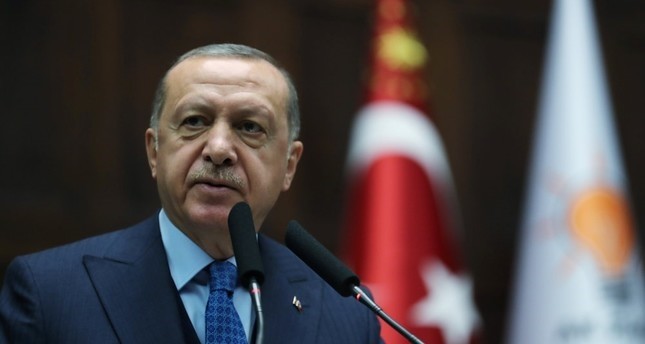 President Recep Tayyip Erdou011fan, the chairman of the AK Party, gestures to his supporters as he speaks during his party's parliamentary group meeting at the Grand National Assembly of Turkey in Ankara, Dec. 25.
by Daily Sabah Jan 07, 2019 12:00 am

Turkey has a plan to restore peace in Syria and has "no argument" with Syrian Kurds, President Recep Tayyip Erdoğan said in an article published in The New York Times late Monday.

"The United States withdrawal, however, must be planned carefully and performed in cooperation with the right partners to protect the interests of the United States, the international community and the Syrian people," Erdoğan said.

"Turkey, which has NATO's second largest standing army, is the only country with the power and commitment to perform that task," the president added regarding Turkey's upcoming battle against the Daesh terrorist group.

"In 2016, Turkey became the first country to deploy ground combat troops to fight the so-called Islamic State in Syria. Our military incursion severed the group's access to NATO's borders and impeded their ability to carry out terror attacks in Turkey and Europe," he wrote.

Criticizing the coalition operations in Raqqa and Mosul, Erdoğan said that they relied heavily on airstrikes and with "little or no regard for civilian casualties."

"Turkish troops and fighters of the Free Syrian Army went door to door to root out insurgents in Al Bab, a former stronghold of the so-called Islamic State," he added.

Recalling Turkey's humanitarian efforts in the region, he said that a Turkish-funded hospital provides treatment for Syrian patients and new business projects create jobs and bolster the local economy. "This stable environment is the only cure for terrorism."

Regarding the PKK's Syrian affiliate the People's Protection Units (YPG), Erdoğan said that Turkey has no problems with Kurds, but rather with terrorists like the YPG.

"Under wartime conditions, many young Syrians had no choice but to join the P.Y.D./Y.P.G., the Syrian branch of the P.K.K., that Turkey and the United States consider a terrorist organization. According to Human Rights Watch, the Y.P.G. militants have violated international law by recruiting children," Erdoğan said. "Following the United States withdrawal from Syria, we will complete an intensive vetting process to reunite child soldiers with their families and include all fighters with no links to terrorist organizations in the new stabilization force," he added.

"Local councils in predominantly Kurdish parts of northern Syria will largely consist of the Kurdish community's representatives whilst ensuring that all other groups enjoy fair political representation."

Regarding the efforts to completely destroy Daesh terrorist group, Erdoğan said that Turkey expects international support in its bid to finish off the group. "Turkey intends to cooperate and coordinate our actions with our friends and allies. We have been closely involved in the Geneva and Astana processes, and are the sole stakeholder that can work simultaneously with the United States and Russia," he said.

"Turkey is volunteering to shoulder this heavy burden at a critical time in history. We are counting on the international community to stand with us."