Turkey to seek balance between Russia, US for stability in northeastern Syria 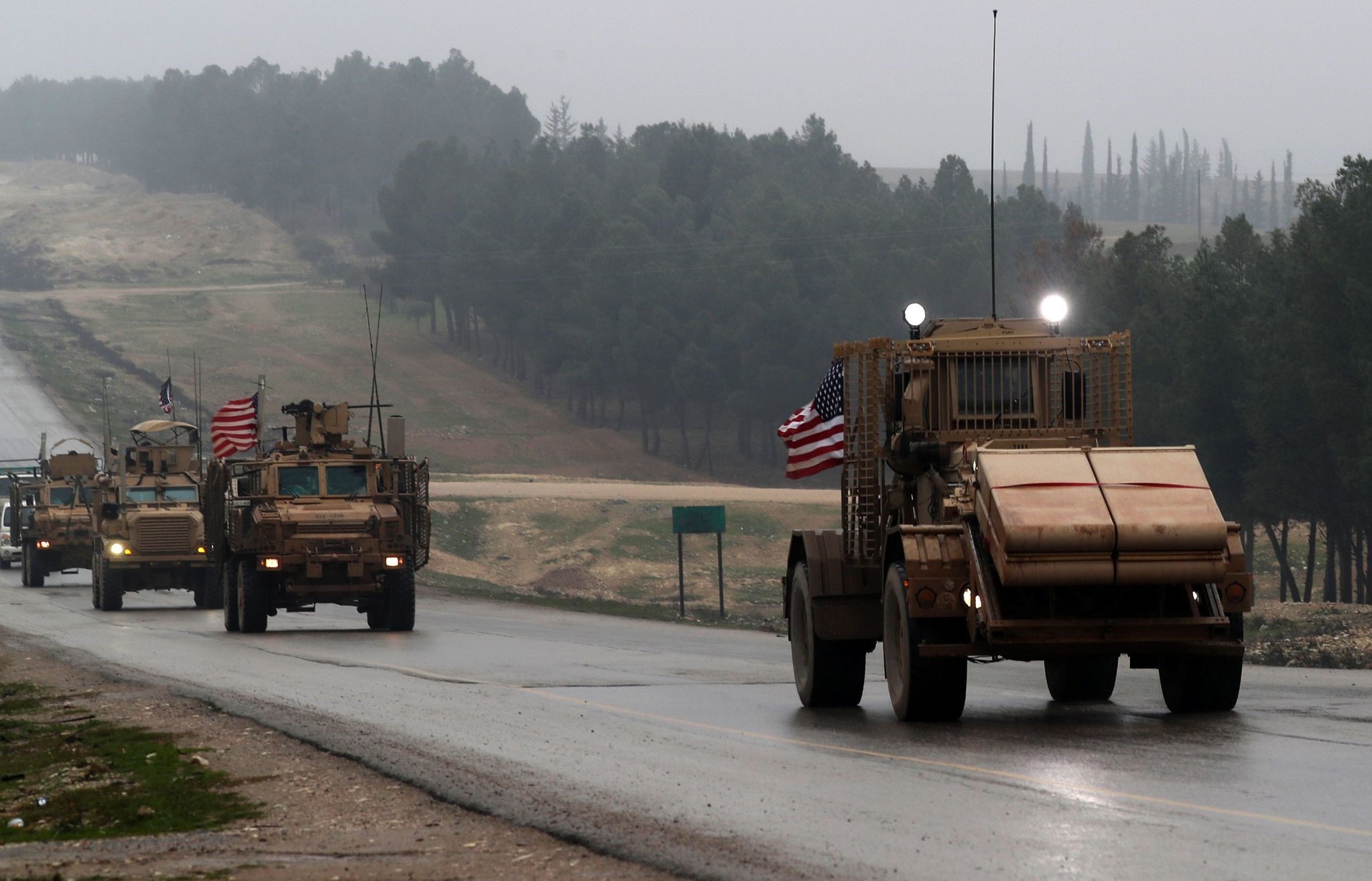 Following the U.S.' decision to withdraw from Syria, Ankara will seek to strike a balance in its relationship with Moscow and Washington to help contribute to stability east of the Euphrates. Turkey has also said that a cross-border operation east of the Euphrates would target YPG terrorists only, and not the Kurdish people

The abrupt decision by the U.S. to withdraw from Syria has urged other actors on the ground to consider strategies and their next steps. The move may create the risk of rivalries and new tensions between various actors left to fill the void by the U.S.; hence Ankara, in search of balanced policies without giving up its priorities, is enhancing talks with partners to shape its future steps in Syria. "During the process of the U.S. withdrawal from Syria, Turkey would like to pursue a balanced policy [in] coordinating with both the U.S. and Russia. Turkey might focus more on the presence of the PKK-linked People's Protection Units [YPG] along its borders and in the Manbij region," Oytun Orhan, an expert on Syria, told Daily Sabah.

Washington's decision is particularly significant for Turkey, which had been preparing to launch an operation against the YPG terrorist group in northeastern Syria.

Ankara has welcomed the decision by the U.S. to withdraw troops from Syria after their long cooperation with the YPG, which greatly disturbed Turkey, and was carried under the pretext of fighting Daesh. Although Turkey is taking the move with a pinch of salt and seeks to carefully assess how the U.S. troops' withdrawal will unfold.

In December, U.S. President Donald Trump announced victory over Daesh and said that the U.S. would withdraw its 2,000 troops from Syria. Even though Trump promised a fast withdrawal, the U.S. has currently affirmed that the process will be extended over four months. Yesterday, Trump was quoted by Reuters that the U.S. withdrawal would not be that quick.

While announcing the withdrawal, Trump stressed that regional countries including Turkey would take care of the remainders of Daesh. With Trump's remarks stressing that Daesh is defeated, it appears that there is no reason left for the U.S. to support the YPG terrorist group. However, if the U.S. will continue to protect the YPG following its withdrawal, the issue will remain a sticking point with Turkey.

"While the U.S. withdraws, it has three main goals; protecting its former allies, preventing Iran from extending its influence and avoiding the resurgence of Daesh," Orhan said and added that as the U.S. aims to cooperate with Turkey during the process, its goal of protecting its "ally" has been creating conflict and raising questions.

With the aim of ironing out the details on the U.S. withdrawal and coordination with Turkey during the process, Trump's National Security Adviser John Bolton will arrive in Turkey today. The talks between the two sides are also expected to shape the fate of the YPG.

"We don't think the Turks ought to undertake military action that's not fully coordinated with and agreed to by the United States at a minimum so they don't endanger our troops, but also so that they meet the president's requirement that the Syrian opposition forces that have fought with us are not endangered," Bolton said yesterday in Israel referring to the conditions for the U.S. to withdraw.

Kalın underlined that one of the objectives of Turkey's fight against the PKK and its Syrian affiliates is to protect Kurds from the oppression of this terror group. "It's disrespectful to our Kurdish brothers to claim they are represented by a terror group," Kalın added. Turkey will resolutely continue its efforts to end the war, providing security and implementing a political process for Syrians regardless of their religion or ethnicity, Kalın highlighted.

Previously, Ankara strongly condemned statements by U.S. Secretary of State Mike Pompeo last week over the country's approach to the YPG, underlining that Turkey embraces all Syrian people from every origin, except terrorist organizations, which cannot be equated with the Kurds.

"We still have lots of things to work with on the Turks. Not only the withdrawal, but also all of the other elements that the president laid out: The importance of ensuring that the Turks don't slaughter the Kurds... All of those things are still part of the American mission set," Pompeo said last week, marking the third time in less than a week that a senior U.S. official has expressed commitment to protecting the YPG terrorist organization.

In response to the statements of Pompeo, Foreign Ministry spokesman Hami Aksoy said in a written statement: "We deny the content and the tone of [Pompeo's] remarks in regard to our county. Portraying our country, which in fact embraces all Syrian people, including the Kurds, and its fight against terrorist organizations, as if it targets a specific community in Syria, is unacceptable."

Bolton's statements show that the sides need to reach an understanding over the future of the YPG. Ankara clearly indicated that it was ready to target the YPG, just ahead of the U.S. decision to withdraw. Turkey announced that the operation east of the Euphrates is on hold for some time after the U.S. move. During the talks with Bolton, the Turkish side is expected to emphasize concerns over threats directed toward the country's national security. The fight against Daesh and Turkey's role is also expected be discussed in order to prevent the surge of the terrorist group.

COOPERATION WITH RUSSIA TO CONTINUE

Aside from the U.S., Turkey will also enhance its dialogue with Russia during the elusive process in search of balanced policies. President Recep Tayyip Erdoğan is expected to meet his Russian counterpart Vladimir Putin in the upcoming days to evaluate the process after the U.S. leaves.

"They need to work out an arrangement that will help them to avoid clashing with each other in Syria," Yury Barmin, a Russia expert, told Daily Sabah.

He underscored, "The two have worked hard to work out an arrangement that would be mutually beneficial in politics and trade, but recent geopolitical developments, specifically in Syria, may threaten their cooperation."

Turkey and Russia have been continuing cooperation as guarantors of the Astana process along with Iran. The two countries previously achieved the Sochi deal preventing a disaster in Syria's Idlib. The new developments in Syria after the U.S.' leaving might also impact Turkish-Russian ties.

"As Turkey cooperates with Russia in Syria, following the withdrawal of the U.S., it would keep a balanced policy. Turkey would inform Russia that its aim is not to take control of east Syria, but to target the YPG," Orhan said.

Commenting on Russia's perspective on the U.S. withdrawal, Orhan said that Russia would not like to see the Free Syrian Army (FSA) backed by Turkey or the militias backed by Iran to take control of the areas left by the U.S. Russia would like regime forces to hold control of these areas, which might create tensions in its ties with Turkey.

Referring to the U.S. withdrawal, Barmin said, "It's a double-edged sword for everyone in Syria," and added that, "the U.S. pullout gives more space for Damascus and Iran's power to grow."

Another country that welcomed the U.S.' decision to withdraw was Iran. "Iran would like the militias that it supports to control the petrol-rich areas east of the Euphrates along with Hezbollah," Orhan said. However, one significant hesitation by the U.S. is that Iran will extend its control in vacuum left by the U.S.

Meanwhile, the U.S. has been under substantial pressure from Israel which has called for avoiding steps that would play into the hands of Iran. Orhan stressed that under new conditions, Israel might take initiatives and launch attacks in Syria as well.

Many questions over the future of Syria hang in the air with the U.S.' sudden decision to leave. In the upcoming period, for yet another time Turkey will have to inform the U.S. and Russia about the YPG's threats to the country's national security. Turkey has long been stressing that it supports the territorial integrity of Syria and that terrorist groups such as the YPG seeking separatist agendas need to be eliminated.