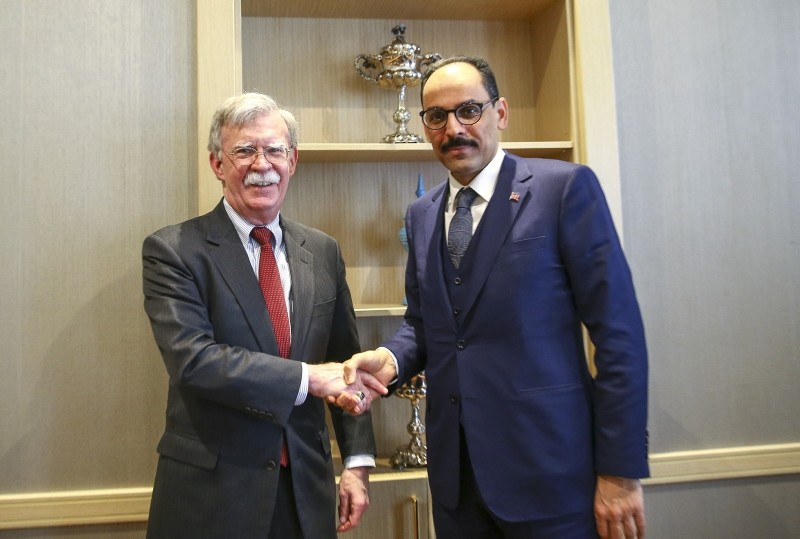 Turkish and American delegations including Presidential Adviser Ibrahim Kalın and U.S. National Security Adviser John Bolton met in Ankara on Tuesday to discuss U.S. withdrawal from Syria, the future of U.S. weapons given to the People's Protection Units (YPG) and the U.S. bases in the region.

Turkish and U.S. officials held the meeting at the Beştepe Presidential Complex in Ankara and the talks lasted around two hours. U.S. Chairman of the Joint Chiefs of Staff Gen. Joseph Dunford and James Jeffrey, the U.S. special representative to Syria and the special envoy to the anti-Daesh coalition, also attended the meeting.

Speaking in a press conference afterward, Kalın said that Turkey "welcomes [U.S. President Donald] Trump's decision to pull out" of Syria. "Yet issues, including how this withdrawal will take place, what kind of body will be left behind, particularly what will happen to the heavy weapons [given to the YPG by Washington], and the fate of the U.S. military bases and logistic centers need clarifying," he said.

"Turkey's expectation is that the U.S. retrieves all the weapons it supplied to the YPG terrorists; and closes its 16 military bases in Syria or transfers them to local forces."

Earlier on Dec. 19, Trump announced the withdrawal of some 2,000 U.S. troops from Syria. He later added, however, that the pullout will not immediately take effect.

Following the talks, Bolton left Ankara without meeting President Recep Tayyip Erdoğan while Dunford and Jeffrey remained behind to continue their contacts in the capital.

Commenting on the issue, Kalın said that "there was a request yet it was not confirmed," and added that Erdoğan had not promised to meet Bolton. He underlined that it is not right to consider this as a reaction.

Kalın also highlighted that the sides are focused on the withdrawal and discussed the post-withdrawal period in detail.

"There is no slowdown in the U.S. withdrawal from Syria," he said, adding that one of the two files he gave to the U.S. national security adviser was regarding the YPG's human rights violations in Syria.

Referring to Bolton's comments that as a precondition for the U.S.' withdrawal, the protection of the YPG must be assured, Kalın said, "We, notably our president, reacted to equating the Syrian Kurds with the PKK terrorist organization and its Syrian affiliation the YPG. In the meeting, we expressed the necessity of distinguishing those."

Bolton said Sunday that the U.S. military withdrawal from northeastern Syria will be subject to defeating Daesh remnants, and Turkey assuring the safety of fighters allied with the U.S., i.e. the Syrian Democratic Forces (SDF), which is dominated by the YPG.

While Bolton relayed the White House's insistence on Turkey to refrain from attacking YPG terrorists in northern and eastern Syria, Turkey has been unwilling to give such a guarantee, citing security concerns posed by the PKK-affiliated militants alongside its borders.

Ankara has repeatedly told Washington that the YPG is not different from the PKK and that partnering with one terrorist group to fight another was not acceptable. Washington, however, has continued to support the YPG, despite the U.S. listing the PKK as a terrorist organization.

Kalın added that YPG militants should completely withdraw from northern Syria's Manbij and hand over authority to local elements. "We are now beyond joint patrols," he said.

Asked about the possibility of a Turkish cross-border operation beginning before the withdrawal of U.S. troops from Syria, Kalın said: "Turkey's position is that we can coordinate with anyone but we cannot seek permission from any party. Turkey must consider its own priorities to make its own plans."

Kalın also said that the number of Syrian refugees returning home will continue to increase as security is restored.

In order to prevent the terrorist group from tightening its grip on northeast Syria and disrupting peace efforts in the region, Turkey aims to accelerate the Manbij road map it reached with the U.S. last June.

As part of the agreement, Turkey and the U.S. agreed to work on the withdrawal of the YPG from Manbij. The aim of the deal is to ensure security and stability in the province by eliminating YPG terrorists and ultimately handing the administration of the province to a body consisting of local people.

Yet, progress in the deal, Ankara says, has been "sluggish" and slower than initially planned, due to what has been described as the disingenuous attitude of the U.S. about the plan.

After the Kalın-Bolton meeting, U.S. National Security Council spokesperson, Garrett Marquis said on Twitter that Bolton and Kalın had a productive discussion regarding the U.S. decision to withdraw from Syria.

Marquis added that the two sides had identified further issues for dialogue and that the U.S. was looking forward to ongoing military-to-military consultations.

Speaking on the meeting, however, Ali Çınar, the president of the U.S.-based Turkish Heritage Organization, said there are four indicators that suggest the meeting was unfruitful.

"Erdoğan's comments on Bolton, the U.S. delegations' insistence on supporting the YPG, Bolton's early departure and the cancellation of the ensuing press conference show that the two-hour meeting proceeded in a negative atmosphere," he wrote on Twitter.

He also told Daily Sabah that the result of the meeting was a clear indication of deepening mistrust between the two NATO allies, adding that Washington's failure to appoint an ambassador to Ankara also remains a vital issue.

Following a day of intense negotiations between Turkish and American delegations, Presidency Communications Director Fahrettin Altun said in a tweet that Bolton "got a taste of world famous Turkish hospitality."

Turkey's national security is non-negotiable. Our fight against terrorism isn't a question of "if" but "when."

Acting like Syrian Kurds and members of a US-designated terrorist group are one and the same is an insult to the Kurdish people and our intelligence.

"Turkey's national security is non-negotiable. Our fight against terrorism isn't a question of "if" but "when." Acting like Syrian Kurds and members of a US-designated terrorist group are one and the same is an insult to the Kurdish people and our intelligence," Altun added.

The U.S. delegation is scheduled to hold talks with National Defense Minister Hulusi Akar later on Tuesday. Dunford is also expected to meet with his Turkish counterpart Gen. Yaşar Güler.