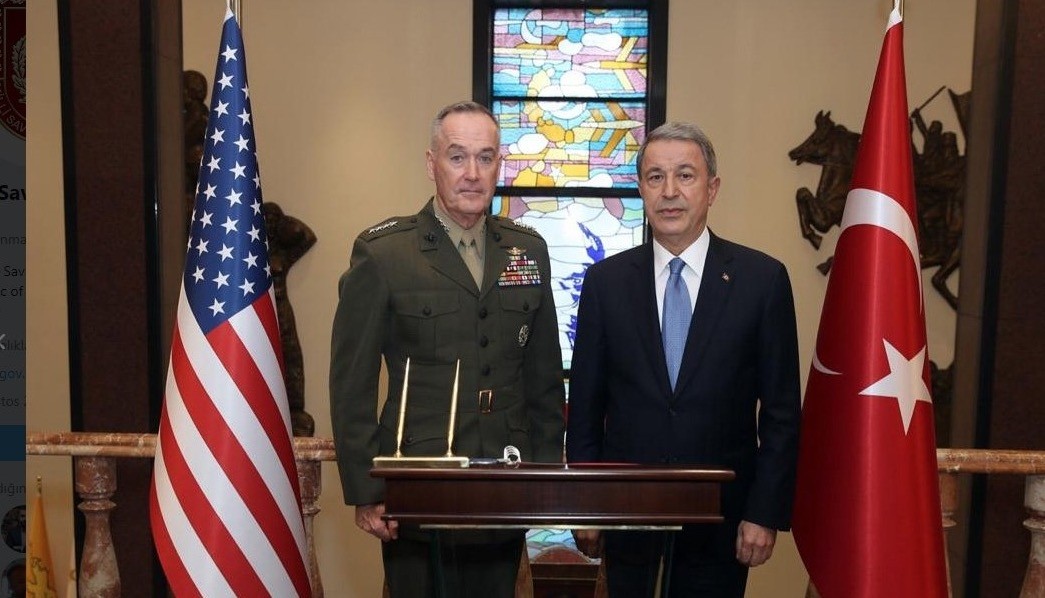 Defense Minister Hulusi Akar called on the U.S. late Tuesday to fulfill the Manbij roadmap and remove the PKK-linked People's Protection Units (YPG) terrorists from the northern Syrian region as soon as possible agreed by both countries.

U.S. National Security Adviser John Bolton's previous comments that the protection of the YPG must be assured as a precondition for the U.S.' withdrawal drew ire from Turkish officials, especially his usage of the term "Kurds" to refer to the terrorists. Turkish officials have stated countless times that Turkey has no problems with any ethnic group but only with terrorists.

At a meeting between Turkish National Defense Minister Hulusi Akar and U.S. Joint Chiefs Chairman Gen. Joseph Dunford in capital Ankara, with the attendance of Turkish Chief of General Staff Gen. Yaşar Güler, participants discussed taking back weapons from the YPG and the fight against terrorist groups, including Daesh, the Ministry of National Defense said in a statement.

During the meeting, Akar reiterated that Turkey was determined to take any measures needed for its border security and regional stability.

Akar also said the Turkish Armed Forces are fighting against the PKK/YPG and Daesh, not its Kurdish brothers in the region.

He added that Turkey has always respected the territorial integrity of both Syria and Iraq.

Turkish and U.S. troops began joint patrols in Manbij in the beginning of November.

Dunford also reiterated U.S. commitment to Turkish security, according to a spokesman for the chairman.

"The senior leaders discussed the security situation in Syria, the completion of the Manbij road map, and the deliberate, coordinated effort to withdraw U.S. ground forces from Syria. They also discussed the importance of continued U.S.-Turkish cooperation on counterterrorism efforts to ensure the lasting defeat of ISIS," Col. Patrick Ryder said in a statement, using an alternate name for Daesh.

"The U.S. and Turkey enjoy a strong and continuous military-to-military relationship as key members of the NATO alliance," Ryder added.

In its more than 30-year terror campaign against Turkey, the PKK -- listed as a terrorist organization by Turkey, the U.S. and the EU -- has been responsible for the death of some 40,000 people, including many women and children.