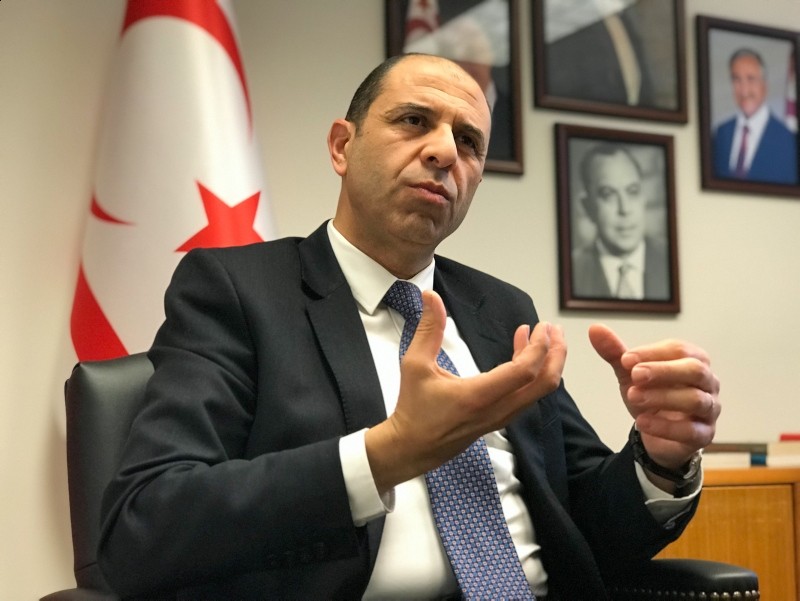 The foreign minister of the Turkish Republic of Northern Cyprus (TRNC) has called for turning the U.N. peacekeeping mission on the island into a civilian mission.

In an interview with Anadolu Agency (AA), Kudret Özersay, who held meetings with U.N. officials and diplomats in the U.S., said the military mission was no longer necessary, adding that the "changing circumstances" required a revision of the current peacekeeping forces on the Eastern Mediterranean island.

Özersay traveled to New York on Jan. 7 to express the TRNC's views to the U.N. and members of the U.N. Security Council, where the issue is expected to be discussed by the end of January.

Underlining that the presence of the roughly 800 U.N. forces on the island was costly, the minister stressed its role as a deterrent against armed confrontation could be achieved by a civilian mission at half the current cost.

"We believe there is no need for an [military] operation that costs nearly $22-23 million in one year," he said, adding that $54 million is expected to be spent for the U.N. presence on the island in 2019.

The minister said there is a general opinion at the U.N. that the functions, powers, and number of U.N.peacekeeping troops on the island need to be revised, even if their mandate is extended in February.

The island has been divided since 1974 when decades of violence against the island's Turks was followed by a Greek Cypriot coup and Ankara's intervention as a guarantor power.

Negotiations over Cyprus resumed after a 2004 U.N.-backed Annan Plan to reunify the Turkish Cypriot and Greek Cypriot communities.

Numerous negotiations opened from 2005 to 2016 also failed, with talks falling out in 2013 due to the Greek Cypriot government's unilateral declaration of an exclusive economic zone in the Eastern Mediterranean and initiation of drilling activities in search of hydrocarbons in the region.

There has been an on-and-off peace process over recent years, the latest failed initiative having taken place in Crans-Montana, Switzerland under the auspices of guarantor countries Turkey, Greece and the U.K., which collapsed last year.

Touching upon the current dispute on hydrocarbon extraction in the Eastern Mediterranean, Özersay noted that the issue could become an opportunity for dialogue between the two sides.

He underlined that in the absence of bilateral agreement on drilling rights, companies could lose resources and time, and that tensions could escalate in the region.

Suggesting that a partnership based on cooperation may be more feasible between the north and the south of the island, Özersay said the Greek Cypriots' reluctance to share power and wealth made a federal model "impossible."

"If you do not want to share governance and wealth you cannot make a federal partnership," he said, adding that cooperation in energy and fighting terrorism and organized crime could lead to interdependence between the two sides and "ultimately lead to a comprehensive solution to the dispute," he added.