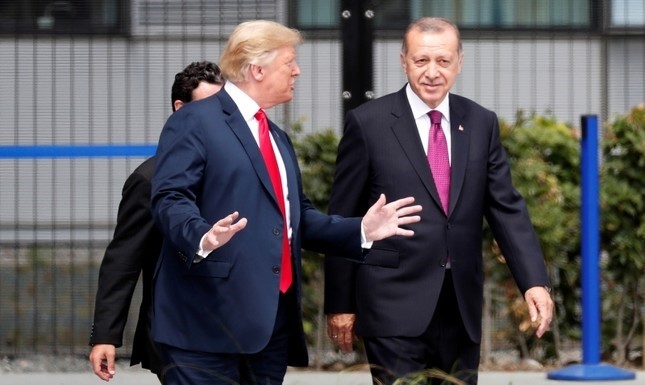 U.S. President Donald Trump, left, chats with President Recep Tayyip Erdogan as they attend for a family picture during a NATO summit in Brussels, Belgium, July 11, 2018. (EPA Photo)
by Daily Sabah Jan 15, 2019 12:00 am

U.S. President Donald Trump said late Monday that Turkey and the United States' economic ties have great potential, and will develop even more in the future.

"Spoke about economic development between the U.S. & Turkey - great potential to substantially expand!," Trump said regarding his phone call with President Recep Tayyip Erdoğan in a tweet.

Saying that he also discussed the fight against Daesh terrorist group, he added that a 20-mile safe zone was another topic of discussion.

President Erdoğan held a phone call with his U.S. counterpart Trump earlier on the same day regarding the latest developments in Syria and bilateral ties, amid a diplomatic spat over the U.S. withdrawal from Syria.

Trump's statement regarding the Turkish-American economic potential indicates a serious backtrack in rhetoric. Hours before the statement, he went as far as saying that Washington would "economically devastate" Turkey if Ankara decided to strike against the militants of the U.S.-backed YPG terrorists.