Manbij attack a provocation to hinder US withdrawal from Syria, Erdoğan tells Trump 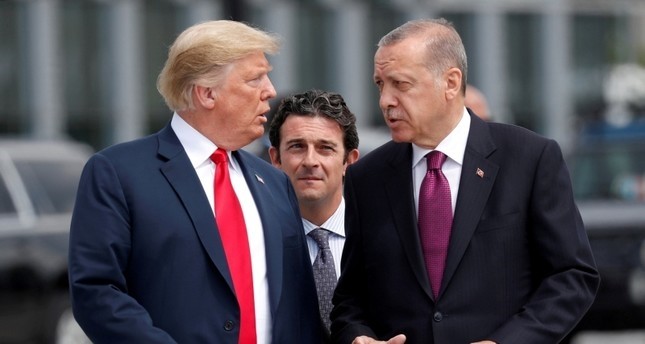 President Recep Tayyip Erdoğan and his U.S. counterpart Donald Trump held a phone call late Sunday, in which they discussed the latest developments in Syria.

The president also told Trump that Turkey is ready to take over security in Manbij without delay and that Turkey agrees to take action to clear Daesh remnants out of Syria and prevent their return.

A restaurant in Manbij town center was rocked by an explosion on Wednesday, killing at least 16 people and injuring many others.

The dead included nine civilians and at least five PKK-linked People's Protection Forces (YPG) terrorists, according to the SOHR.

A previous call between the two heads of state resulted in Washington's decision to pull troops out of Syria.

In initial remarks after the attack, Vice President Mike Pence said the United States would fight to ensure the defeat of the Daesh but reiterated plans to pull troops out of Syria.

Manbij town and its surrounding area have been controlled by the U.S.-backed Syrian Democratic Forces (SDF), which is dominated by the YPG terrorist group, since August 2016 after ousting Deash terrorists who captured the town from moderate opposition in January 2014.