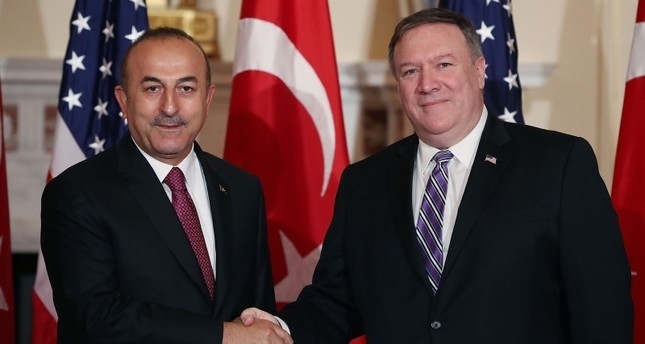 The U.S. State Department, for its part, said the secretary of state reiterated Washington's commitment to addressing Turkish security concerns along the Turkey-Syria border.

Pompeo also emphasized the "importance that the United State places on the protection of forces that worked with the United States and the Global Coalition to Defeat ISIS," Spokesperson Robert Palladino said in a statement, using another name for Daesh.

"They discussed ongoing U.S.-Turkish engagement as part of the deliberate and coordinated withdrawal of U.S. forces from Syria," Palladino added.

Tensions in Syria have been high after the U.S. declared its decision to withdraw troops.

A restaurant in northern Syria's Manbij was rocked by an explosion on Wednesday, killing at least 16 people and injuring many others.

In a phone call on Sunday, President Recep Tayyip Erdoğan told his U.S. counterpart Trump that the terror attack in Manbij was a provocation to hinder U.S. withdrawal from Syria. He also extended condolences for slain American personnel.

Manbij town and its surrounding area have been controlled by the U.S.-backed Syrian Democratic Forces (SDF), which is dominated by the PKK-affiliated People's Protection Units (YPG) terrorist group, since August 2016 after ousting Deash terrorists who captured the town from moderate opposition in January 2014.