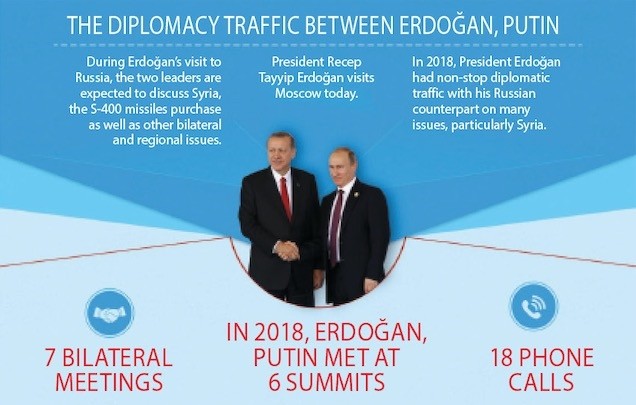 President Recep Tayyip Erdoğan is expected to have his first meeting of this year with his Russian counterpart Vladimir Putin today in Moscow during an official visit to the country.

The two leaders are expected to discuss bilateral relations as well as the regional and international issues, most particularly Syria, during both bilateral meetings and in the meetings between the two countries' delegations that consist of ministers and official figures.

In 2018, the two leaders had busy diplomatic traffic with a total of 25 meetings, seven of which were face to face, while others were over the phone. The first meeting of 2018 took place on April 4, a day before the trilateral summit with Iran over Syria, at the Beştepe Presidential Complex in Ankara. They also met during six summits, mostly over Syria. 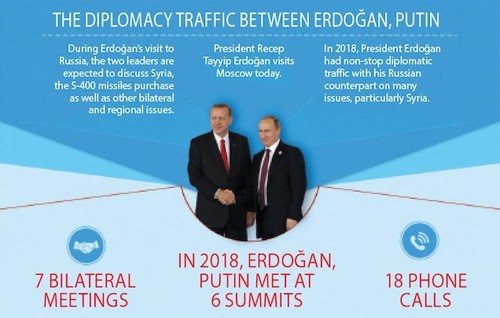 To contribute to the efforts to end the ongoing Syrian conflict, Turkey, Iran and Russia launched the Astana process in the Kazakh capital Astana. Last year, the three guarantor countries agreed in Astana to establish de-escalation zones in the northern province of Idlib and parts of neighboring Latakia, Hama and Aleppo.

The guarantors have said the Astana process is not an alternative but a complementary initiative to the U.N.-brokered Geneva talks.

The first trilateral summit at the presidential level, however, was held last year in Russia's Black Sea city Sochi on Nov. 22. Backed by Turkey, Russia and Iran, a summit was then held in Sochi on Jan. 29-30. It was an attempt to bring all warring parties in the Syrian conflict, excluding the terrorist groups, to the table to facilitate the U.N.-sponsored peace talks in Geneva.

In the second meeting in Ankara, the leaders had "emphasized their strong and continued commitment to Syria's sovereignty, independence, unity, territorial integrity and nonsectarian character."

In a statement after the Ankara summit, the leaders had agreed to continue cooperation in order to "ultimately eliminate" Daesh, the Nusra Front and all other individuals, groups, undertakings and entities associated with al-Qaida or Daesh.

The leaders had underlined, in the fight against terrorism, that separating terrorist groups from armed opposition groups that had joined or would join the cease-fire agreement carries the utmost importance for preventing civilian casualties.

In the last trilateral meeting between Erdoğan, Putin and Iranian President Hassan Rouhani, which took place in Iran's Tehran in September, the parties said, "There can be no military solution to the Syrian conflict, and it can only end through a negotiated political process."

They also "emphasized strong and continued commitment to the sovereignty, independence, unity and territorial integrity of Syria, as well as to the purposes and principles of the U.N. Charter and highlighted that they should be respected by all."

The statement said the leaders "rejected all attempts to create new realities on the ground under the pretext of combating terrorism," while expressing determination to stand against separatist agendas aimed at "undermining the sovereignty and territorial integrity of Syria and the national security of neighboring countries."