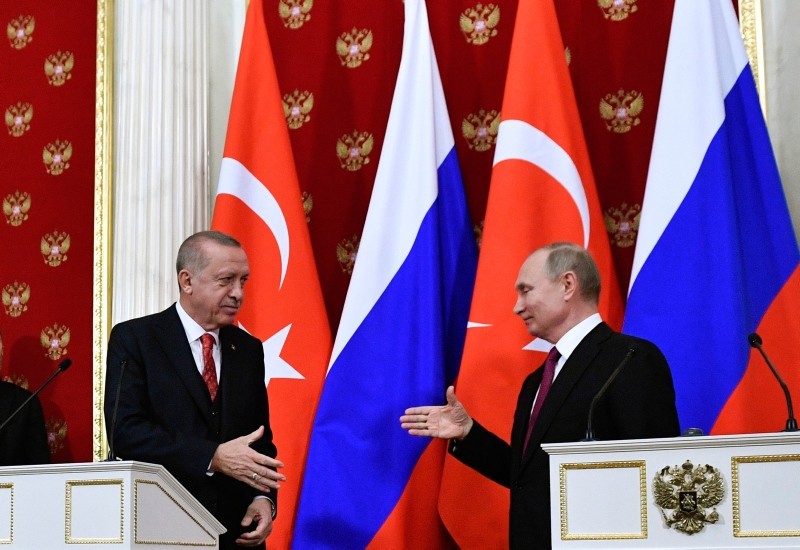 Turkey and Russia are on the same page with regards to the planned "safe zone" in northern Syria, President Recep Tayyip Erdoğan said Wednesday.

Speaking on the issue during a joint press conference following his meeting with Russian President Vladimir Putin, Erdoğan said "The U.S. has already expressed a positive stance. Neither do we have problems [concerning the safe zone] with Russia."

"We respect the interests of our Turkish friends. Especially in terms of ensuring their security," he said.

Both presidents lauded Turkish-Russian cooperation on a political solution to the Syrian crisis, particularly within the Astana process, sponsored by the two countries and Iran.

"Astana process remains the most effective tool for the political settlement of the Syrian crisis," Putin stressed.

Meanwhile, Putin added that Russia could "see that our Turkish partners are doing a lot to tackle the terrorist threat coming from Idlib."

Putin noted that Russian and Turkish defense ministers had already held talks on specific actions the two countries would take in Idlib and that the measures, which he didn't describe, would now be implemented.

"Unfortunately there are many problems there and we see them," he said.

The Russian president also said Ankara and Moscow completed their work on the Syrian constitutional committee, but faced unexpected opposition from some Western countries, namely France, Germany and the United Kingdom.

According to Putin, Russia had to negotiate the makeup of the committee with the regime of Bashar Assad, while Turkey had to deal with the opposition.

"Turkey and Russia completed this difficult task, but then we heard in Geneva that some of our partners thought that the job wasn't done," he said.

Putin added that Moscow would continue to work with the West to form the constitutional committee, although their arguments are "incomprehensible and unexpected."

Addressing the issue of the U.S. military pullout from Syria, Erdoğan said it was "crucial that the U.S.' withdrawal doesn't leave room for terror groups to roam in the region."

The Turkish president also pointed out hundreds of thousands of Syrian refugees had returned to northern Syria's Afrin and Jarablus after Turkey conducted anti-terror operations there, suggesting that the same model should be applied to the areas east of the Euphrates River.

The preparations for the next summit between the leaders of Turkey, Russia and Iran in Russia were underway, Putin said, adding that the meeting will take place soon. Erdoğan hinted that it could take place in February if Iran approves.