Turkey is in Syria for humanitarian purposes, Erdoğan says 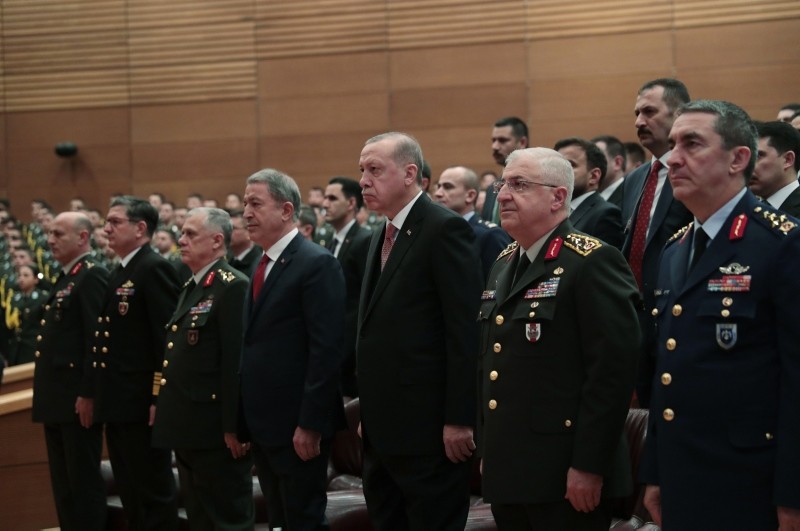 Turkey has no intention of occupying Syria, "our homeland of 780,000 square kilometers is enough for us," President Recep Tayyip Erdoğan said Thursday.

"I'm saying this clearly, Turkey is the only country in Syria with a humanitarian cause," he said during an address at the Turkish Military Academy in Ankara.

Erdoğan stressed once again the importance of the Adana Agreement, which was also covered during the meeting with his Russian counterpart Vladimir Putin on Wednesday.

The agreement dating back to 1998 was signed between Ankara and Damascus when the two countries were at the brink of war due to Syrian regime's support to the PKK terrorist group.

Following the agreement, Damascus demanded Abdullah Öcalan and other leaders of the PKK to leave the country, which ended up in Öcalan's capture in Kenya in 1999 and transfer to Turkey to stand trial. Öcalan currently serves a lifelong aggravated prison term.

The agreement, which included Syria's commitment to not to allow terror activities targeting Turkey, also included articles on cooperation in the fight against terrorism and establishing a monitoring committee.

The agreement also dealt a severe blow to the PKK terror activities and marked a hiatus until the power vacuum in Iraq started with the U.S. invasion in 2003 to topple Saddam Hussein.