US threatens to act if Turkey violates Venezuela sanctions 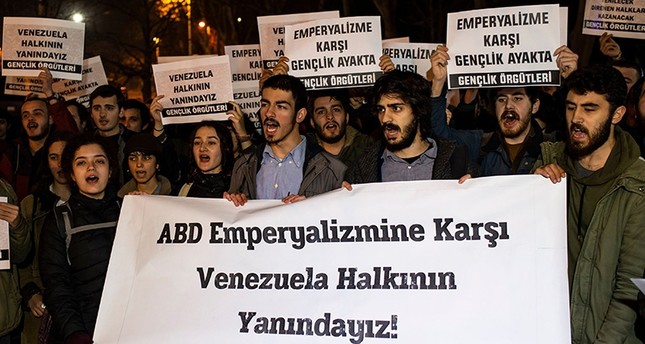 The United States is monitoring trade between its NATO ally Turkey and Venezuela and will take action if it judges any sanctions have been violated, a senior U.S. official said Thursday.

Three months ago Washington introduced new sanctions aimed at disrupting gold sales from Venezuela, which exported more than 20 tons of the precious metal to Turkey in 2018.

On Friday, Marshall Billingslea, U.S. assistant secretary for terrorist financing at the Treasury, is due to hold talks in Ankara with the Turkish government.

The trip was originally planned to discuss U.S. sanctions on Iran, which exports gas to neighboring Turkey, but was likely to include Venezuelan issues as well, a senior U.S. official said.

"We are looking at the nature of Turkish-Venezuelan commercial activity, and if we assess a violation of our sanctions, we will obviously take action," the official said.

Last year Venezuela exported 23.63 tons of gold worth $900 million to Turkey, compared to zero the year before, official Turkish data showed. Nearly all that quantity was in the first nine months of the year, before Washington imposed new sanctions in November.

The official said Washington was disappointed that Turkey continued to support Maduro, adding that Ankara is one of the "awful lot of governments around the world" it has tried to convince to back the undemocratic overthrow of Venezuela's elected president.

"They have not responded positively to that conversation thus far," the official said.

Erdoğan and other Turkish officials have reiterated their support to Venezuela's democratically elected government and President Maduro, condemning any undemocratic interventions.

After the U.S. hastily threw its support behind Guaido, Erdoğan expressed his surprise and disappointment that his counterpart Donald Trump would choose to back an apparent coup attempt.

The Turkish president told Maduro to "keep his head up" during a phone call last week.

Share on Facebook Share on Twitter
Previous in Diplomacy Greece's Prime Minister Alexis Tsipras will pay a two-day official... Next in Diplomacy Emphasizing the close relationship between the two countries by referring...
DAILY SABAH RECOMMENDS