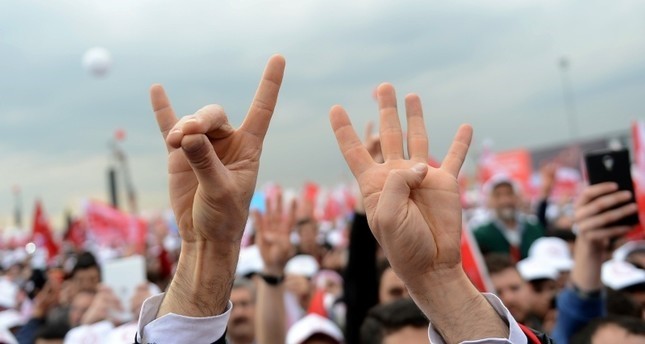 The Turkish Foreign Ministry denounced Thursday the Austrian parliament's decision to go ahead with its ban on what Vienna calls "extremist symbols," including a Turkish gesture of the "grey wolf," and called it a "complete scandal".

"The fact that a regulation published on Feb. 11 in accordance with the Austrian Interior Ministry's so-called "symbols law" includes the 'grey wolf', which is the symbol of a legal political party in our country, is on the same list as the symbol of a bloody terrorist organization like the PKK is a complete scandal, and thought provoking as it shows the point reached by populism," the ministry said, reiterating that it strongly condemns the move.

The "grey wolf" gesture, which is associated with the Nationalist Movement Party (MHP), is formed by placing the ring and middle fingers on the thumb, thus forming the head of a wolf — a symbol of Turkish nationalism

Calling it an "irrational and illogical decision," the ministry said Austria has not only targeted a political party and its supporters who use this symbol with the ban, but also politics as a whole and its legitimate political basis.

The ministry warned that the move will have serious implications for Turkish-Austrian bilateral relations, calling on Vienna to abandon its "dead-end street" politics that fuel populism in the country.

"This is essential for the good of our relationship," it said, calling for authorities to practice commonsense and turn away from bigotry.

The Austrian parliament approved the amendment back in December, and now that the enactment process has been completed for it to be inscribed into law, the ban will officially come into effect on March 1.

The law was proposed to ban symbols and signs used by 'extremist' organizations.

The ban will bring fines up to 10,000 euros for the use, distribution of badges and other material containing the symbols.