US fails to reassure Turkey over alliance on safe zone formation 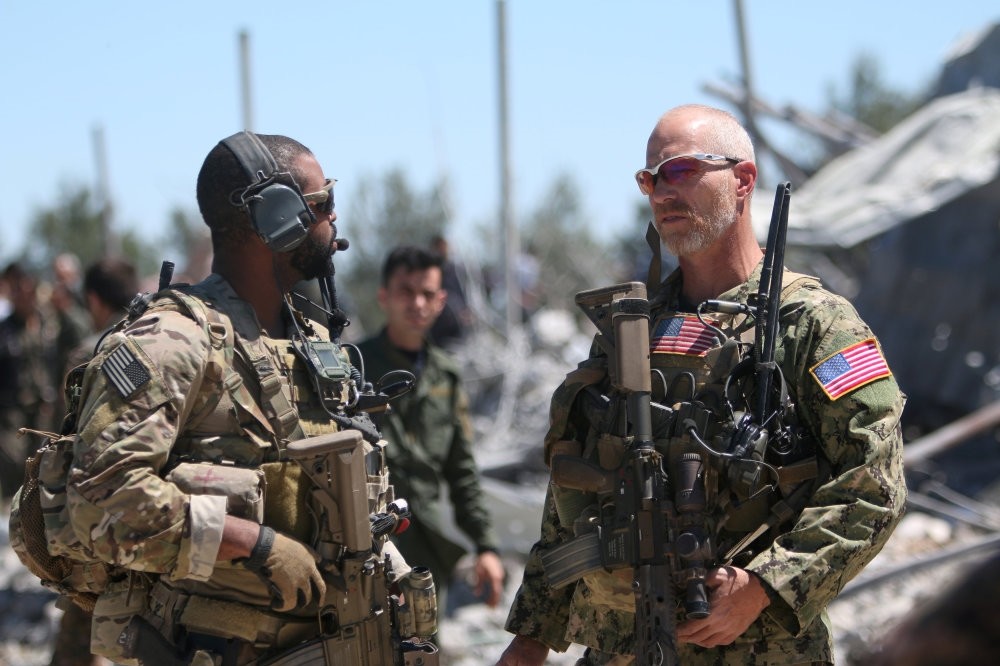 The U.S. is trying to keep a foot in both camps by promising cooperation with Turkey and the YPG regarding the establishment of a safe zone in northern Syria

Turkey expects the U.S. to increase cooperation in the upcoming process to create a safe zone in order to enable a secure region for Syrians to return to their homes. Yet, the U.S. has been sending mixed signals to Ankara as it continues to involve the PKK terrorist group's Syrian affiliate, the People's Protection Units (YPG) in the planned safe zone, a move not befitting its partnership with Turkey. Using a rhetoric contradicting the steps taken by the U.S. in Syria, such as meeting with YPG members, U.S. State Department Spokesman Robert Palladino said Tuesday that the U.S. has been in active contact with Turkey on establishing a safe zone under Ankara and Washington's supervision along the border with Syria after the withdrawal of U.S. troops from the region.

"We are actively engaging with Turkey on this, and that is part of our efforts to ensure a safe withdrawal of United States forces and a stabilized northeast Syria," Palladino noted, answering a question. "We take Turkey's legitimate security concerns seriously. We take them into account in our activities and we have ongoing coordination." In mid-December, U.S. President Donald Trump announced that the U.S. would withdraw its troops from Syria, saying that the only reason U.S. troops were in Syria was to defeat Daesh, which he said was accomplished. Trump's sudden decision prompted divergent voices and criticism suggesting that Daesh continues to be a threat, and it would be a betrayal to the U.S.' ally on the ground, the PKK-affiliated YPG, which Turkey sees as a national threat.

"As President Trump has stated from the outset, the United States is withdrawing its forces from Syria in a manner that is deliberate and coordinated, and we're going to continue to work together to fight Daesh but that's something that's going to continue. We have no timelines to discuss at the current time," he added, confirming Washington's commitment to the pullout of U.S. military forces from the war-torn country.

Hesitant because of the U.S. withdrawal plan, the YPG, the main partner of the U.S in the region, has no option left and has been backed into a corner. Accordingly, starting talks with Syria's Bashar Assad regime to ink a deal which foresees the transfer of major cities to the regime, the YPG hopes to increase autonomy in the northern part of the country.

Despite the fact that Ankara has long criticized the U.S. for working with the YPG to fight Daesh in Syria, saying that using one terror group to fight another makes no sense, Washington has continued to support the YPG.

Accordingly, as the U.S. plans to protect its "closest ally," the YPG in the "safe zone without Ankara," the partners held three meetings in a week in northern Syria.

At the first meeting held in northern Qamishli, a U.S. delegation met with the so-called political representatives of the terrorist organization, where the issue of the safe zone was mainly addressed in the low-level meeting. Joseph Votel, chief of U.S. Central Command (CENTCOM), met with the PKK militant codenamed "Şahin Cilo," who is one of the senior members of the terrorist organization in the second meeting which was held in Ayn Isa. Making a press statement on the sidelines of the meeting, Cilo said, "Votel is working on a proposal that the coalition [U.S.-led coalition forces in Syria] can continue its military presence."

Confirming the meeting between YPG and U.S., local sources speaking to Daily Sabah said that the negotiations between Ankara and Washington continue, while the YPG could not be included in the process in any way.

The sources added that even if Turkey and the U.S. agreed to create a safe zone alongside the Turkish border, the presence of the YPG in the region could be dangerous for the Syrians who return to their home country.

During the three-hour negotiations, along with YPG's activities in the region, the safe zone to be formed in the east of the Euphrates in northern Syria dominated the meeting. This is especially so because the U.S. delegation has pledged to the terrorist organization that it will co-ordinate control of the safe zone.

In January, President Recep Tayyip Erdoğan announced that Turkey will establish a safe zone in northern Syria along the length of its border with the assistance of the U.S.-led coalition forces. While Ankara has been exerting efforts to establish secured areas for Syrian refugees by creating a safe zone, Turkey applied the "open door" policy and became a country hosting 3.6 million Syrians.

Meanwhile, Defense Minister Hulusi Akar is expected to visit the U.S. today, holding a meeting with Acting U.S. Secretary of Defense Patrick M. Shanahan among others.

Speaking in Istanbul at the 6th Ministerial Conference of the Budapest Process on Migration, Erdoğan said Turkey has spent over $ 37 billion of its own national resources to shelter refugees.

Erdoğan stressed that the safe zone formula is the most realistic method to provide the return of refugees, saying if Turkey cannot repatriate millions of Syrians to their homes this way, "sooner or later, they will knock on European doors."

According to the local sources the safe zone would allow many asylum seekers to return to their hometowns. Thanks to the Operation Olive Branch and Operation Euphrates Shield, which were carried out by Turkey and the Free Syrian Army (FSA) to clear the region from the terrorist elements, more than 311,000 Syrian refugees returned to their hometowns.

Highlighting that Turkey has become a shelter for refugees, regardless of their ethnicity, language or religion, Erdoğan noted that Ankara has not turned its back on innocent people who came knocking at its door and has neither left them to the mercy of a regime that is conducting state terror against its own citizens nor to terrorist organizations such as Daesh and the PKK.

Meanwhile, despite Trump's call on European countries to take Daesh militants back to "put them on trial," Europe has refrained from reclaiming them.

Speaking in a press conference, German Foreign Minister Heiko Maas said Monday that Trump's request could be "difficult to implement."

"The United States is asking Britain, France, Germany and other European allies to take back over 800 Daesh fighters that we captured in Syria and put them on trial", Trump tweeted last Saturday.

"It is certainly not as easy as they think in America," Maas stressed, adding that the former Daesh militants would only be accepted in the country if it could be ensured that they were taken into custody immediately. French Justice Minister Nicole Belloubet, on the other hand, said that Paris will evaluate the situation of the French citizens who enlisted in Daesh in Syria, adding that those who return to France will be tried in a court.

Also, a British official said yesterday that a British woman who moved from the U.K. to Syria in 2015 to join the ranks of Daesh won't be able to return to London, A lawyer for the family says the 19-year-old Shamima Begum's citizenship is being revoked in an action that could render her stateless.