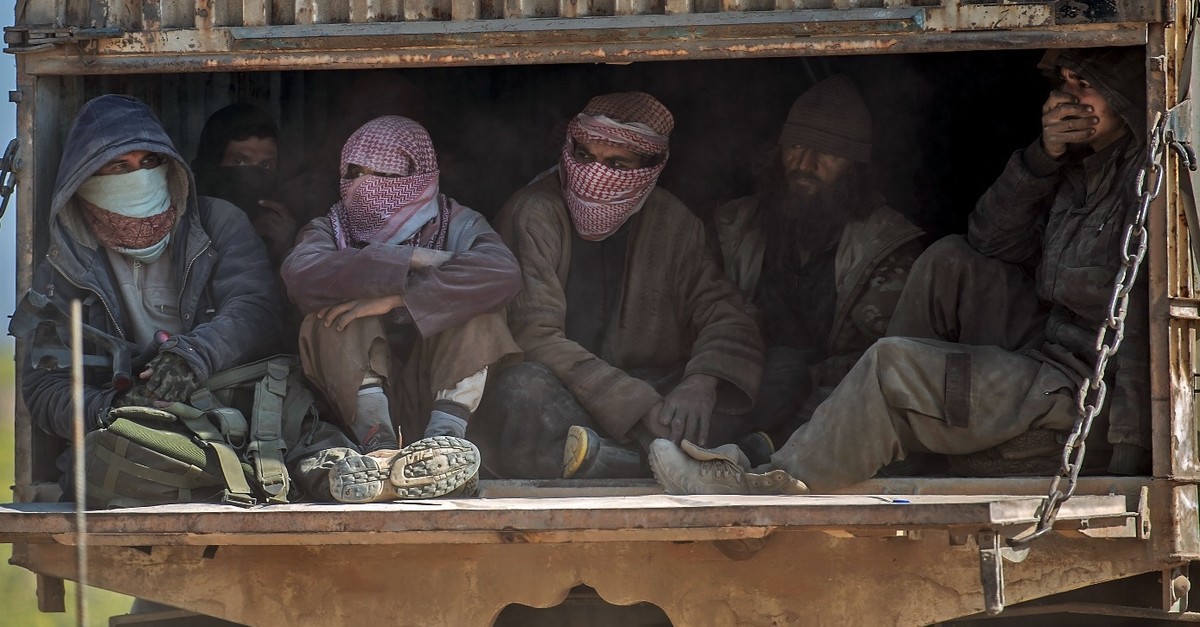 A truck carrying men, identified as Daesh members, being transported out of the terrorist organization's last holdout of Baghouz in Syria's northern Deir el-Zour province, Feb. 20, 2019.
by Daily Sabah Feb 22, 2019 12:14 am

While urging Europe and Turkey to repatriate Daesh members to their countries of citizenship, the U.S. itself has not done the same, denying the return of its own citizens

The U.S. appears unwilling to assume equal responsibility dealing with returnees who were members of Daesh as it rejected the return of a woman who previously joined the group on the grounds that "she was not an American citizen." While adopting a hesitant approach in accepting returning post-Daesh members, the U.S. has been pressuring Europe and Turkey to take them back. As the fight against Daesh reaches its end, countries in the region and beyond have been facing the issue of how to deal with post-Daesh members.

Following his move to withdraw from Syria, saying that Daesh has been defeated, U.S. President Donald Trump called on European countries to take back their foreign Daesh fighters or they would be forced to release them. Yet, in the latest incident, the U.S. indicated that it is not eager to do the same. In relation to the situation of Hoda Muthana, a woman who joined Daesh in Syria, U.S. Secretary of State Mike Pompeo said on Wednesday that she will not be allowed to return to the U.S. with her toddler son because "she is not an American citizen."

"She does not have any legal basis, no valid U.S. passport, no right to a passport, nor any visa to travel to the United States," Pompeo said. However Muthana's lawyer, Hassan Shibly, said she was born in the U.S. and had a valid passport before she joined Daesh in 2014. "She's an American. Americans break the law," Shibly said, adding that, "When people break the law, we have a legal system to handle those kinds of situations to hold people accountable, and that's all she's asking for."

Trump said later on Wednesday on Twitter that, "I have instructed Secretary of State Mike Pompeo, and he fully agrees, not to allow Hoda Muthana back into the Country!"

In the period ahead, many similar incidents might occur as the future of the post-Daesh fighters is posing challenges to various countries that are unwilling to take them back.

Even though the U.S. has presented a firm stance against accepting a post-Daesh member back into the country, Trump urged European countries to take back over 800 Daesh fighters by using threatening rhetoric.

On Saturday, Trump tweeted: "The U.S. is asking Britain, France, Germany and other European allies to take back over 800 [Daesh] fighters that we captured in Syria and put them on trial. The caliphate is ready to fall. The alternative is not a good one in that we will be forced to release them."

Yet, European countries cautiously approached the demand of the U.S. Late Sunday, German Foreign Minister Heiko Maas told German media that the U.S. president's request is "extraordinarily difficult to implement" since court proceedings need to be immediately launched to investigate the situation of German nationals asking to return.

Maas added that German law gives its nationals the right to re-entry, but the country would discuss the demand with Washington as well as its European partners, notably France and Britain. "However, it is surely not as easy as [they are] imagining it in America," he said.

French Justice Minister Nicole Belloubet told France 2 television on Feb. 18 that the country will take back French militants on a case-by-case basis.

French Foreign Minister Jean-Yves Le Drian, as a country that suffered the most from Daesh attacks especially between 2015 and 2016, previously referred to the militants as enemies of the country who should face justice either in Syria or Iraq, the countries they became captives in. French recruits consist of the largest contingent of the terrorist organization from Europe.

Russia also said the transfer of foreign terrorists from Syria must be conducted in accordance with the respective U.N. resolution.

Turkey seems to be another target of the U.S. regarding the burden of foreign fighters. According to sources speaking to Sabah daily, a high-level U.S. official asked Turkey to assume responsibility in taking care of Daesh fighters' children and spouses staying in Syria. In relation to the request, Turkish officials reportedly said, "Joint efforts should be presented since the parents of these children are from various nations" and added, "Turkey exerts effort for the innocent people and takes responsibility."

Highlighting the grave situation of the children of Daesh terrorists, Save the Children revealed on Feb. 20 that more than 2,500 children from over 30 countries are living in three camps for people displaced in northeastern Syria and stressed that among the children, 38 are unaccompanied.

According to the agency, the children, from families with perceived or actual associations with Daesh, are separated from the rest of the population in the camps. As a result of this separation, their ability to obtain access to aid and services has been affected.

Furthermore, the agency reported that in some cases, individuals from overseas who were recruited by Daesh as children are now mothers themselves.

Save the Children, which is working in three camps to provide support, underscored that further specialized protection as well as health and nutrition services are urgently needed.