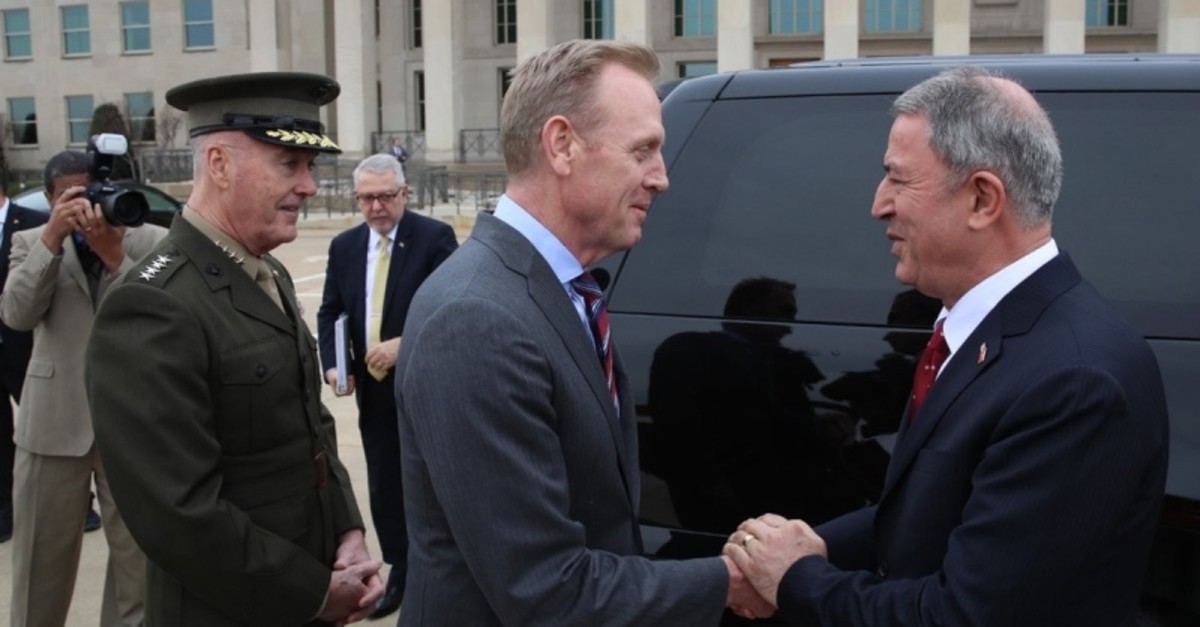 Turkish Defense Minister Hulusi Akar arrived in Washington on Friday together with Chief of General Staff Yaşar Güler to discuss Syria and other issues with their U.S. counterparts.

Greeted by Acting U.S. Defense Secretary Patrick Shanahan, Akar was welcomed with a ceremony that included a military band and three cannons that fired off artillery rounds in honor of his arrival.

The two then entered the Pentagon, where they prepared for a meeting.

"We wanted to do something special, so we brought out the cannons with [Joint Chiefs of Staff] Chairman [Gen. Joseph] Dunford's permission," Shanahan said to Akar.

Shanahan highlighted the importance of the meeting, saying he wants to work with Ankara to find solutions to the problems in Syria and was looking forward to making progress.

"Our visit is important not only for bilateral relations, but also for security and stability in the region," said Akar, who thanked Shanahan for his invitation.

Speaking to Anadolu Agency after the meeting, Akar said they reminded the U.S. delegation there should be no vacuum of power after U.S. forces' withdrawal from Syria.

A senior administration official said Friday that Washington will leave about 400 U.S. troops split between two Syrian regions, a reversal by President Donald Trump that could pave the way for U.S. allies to keep troops in Syria.

The U.S. authorities also accepted working together to avoid any delay on the Manbij roadmap in northern Syria and to conclude it quickly, the Turkish defense minister said.

Akar also took the opportunity to discuss the terrorist organizations that Turkey is dealing with.

"I would like to underline the difference between the YPG, PYD, PKK type terrorist organizations," he said.

"We have never had any problem with Kurds or other ethnicities in Turkey or outside Turkey in Syria. But there will be fighting against terrorist organizations."

Akar and Shanahan discussed cooperation in the field of defense, operations against Daesh in Syria, and Turkey's concerns over U.S. support for the YPG/PYD in Syria.

Akar underscored the need for cooperation between the two countries to maintain Syria's political and territorial integrity as well as Turkey's determination to fight against terrorist organizations, including the PKK, YPG, PYD, Daesh and the Gülenist Terror Group (FETÖ).

The two leaders highlighted the rooted strategical partnership between the two countries and NATO alliance especially in Afghanistan, Kosovo and Iraq. They said they would also discuss Turkey's S-400 missile defense system deal with Russia.

Ankara is planning to purchase 100 F-35 fighter jets from the U.S. pending congressional approval. Thirty fighter jets have already been approved for purchase.

Washington, however, has expressed concern over Turkey's S-400 purchase, saying the system might obtain confidential information on the fighter jets, including their detection range and operation mode.