Safe zone near the border needs to be controlled by Turkey, Erdoğan says 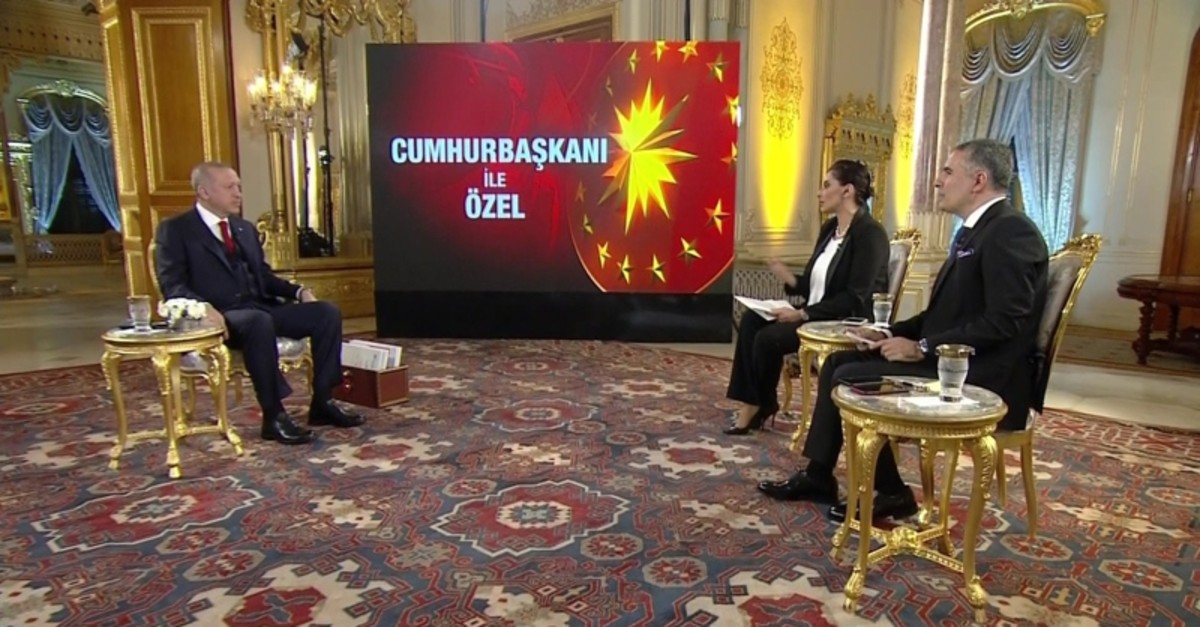 A safe zone near the Syria-Turkey border needs to be controlled by Turkey, President Recep Tayyip Erdoğan said Saturday.

"If a safe-zone is to be established along Turkey's border, that area needs to be under our control. We cannot take precautions after rockets hit our land and need to take precautions beforehand," Erdoğan told a joint broadcast by CNNTürk and KanalD channels.

Erdoğan's comments came after a senior U.S. official said the country would leave about 400 U.S. troops in Syria, a reversal by President Donald Trump.

The president highlighted that Turkey will not allow that area to become a safe zone for terrorist organizations after the withdrawal of U.S. forces from Syria.

Turkey has continued intense diplomatic traffic with its NATO ally to solve the problem regarding the PKK's Syrian offshoot People's Protection Units (YPG). As part of these efforts, Erdoğan and Trump discussed the Syria troop withdrawal in a phone call late Thursday. During the call, the presidents discussed the latest developments in Syria, reiterating joint commitment to fighting terror and agreeing to support a political resolution to the conflict.

Erdoğan noted that the northwestern Syrian city of Idlib is significant as 300,000 people could flee the city and come to Turkey if security is not established there.

Erdoğan said that U.S. President Donald Trump invited him to the U.S. but he told him that he expects him to visit Turkey first.

Erdoğan noted that he may visit Washington following the local elections on March 31, or the U.S. president may also visit Turkey then.

"We have a positive relationship with Mr. Trump, which allows us to resolve many issues in an easier manner," Erdoğan said.

Erdoğan criticized Saudi Arabian officials regarding the killing of Jamal Khashoggi, noting that by saying they do not know what happened to him and who ordered his killing they thought the world is a "fool."

"Who else besides the Crown Prince Mohammed bin Salman is supposed to know this since all the names [of the hit squad] are out there?" the president said.

Regarding the European Council's decision to suspend Turkey's accession talks, Erdoğan said it has no bearing.

Erdoğan also mentioned Egypt's Abdel-Fattah el-Sissi, criticizing the recent execution of nine people in the country, saying he refused to talk to "someone like him."

"They killed nine young people recently. This is not something we can accept,"

Amnesty International called on Egypt to halt the executions, saying that some defendants said they were forcibly disappeared and confessed under torture.

"Of course, we are going to be told that it is a decision of the judiciary, but there, justice, elections, all that, are codswallop. There is an authoritarian system, even totalitarian," Erdoğan added.

"Now, I am answering those who wonder why Tayyip Erdoğan does not speak to el-Sissi, because there are mediators who come here sometimes, but I will never talk to someone like him," he said.

Erdoğan also attacked Western countries that "roll out the red carpet" for el-Sissi and turn a blind eye to the latest executions in Egypt.

Bilateral ties between Turkey and Egypt have been tense since the ousting of Egypt's first democratically elected president, Mohammed Morsi, by the incumbent President Abdel-Fattah el-Sissi in 2013. Turkey has been critical of Morsi's ouster, describing his overthrow as a military coup.