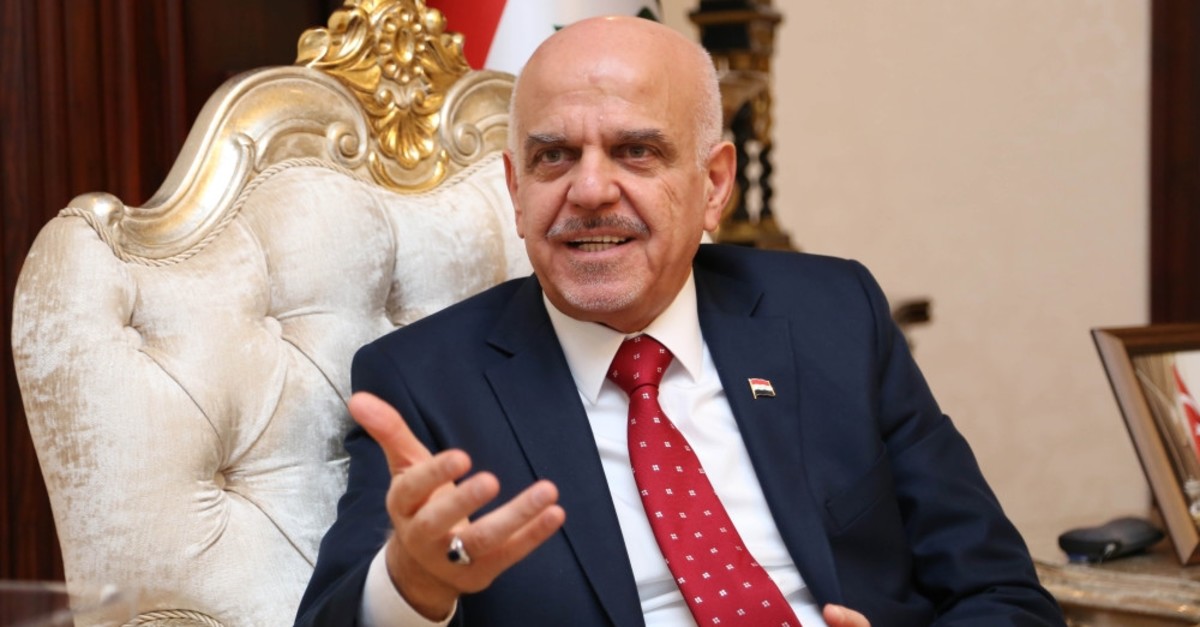 Speaking on Turkey's stance over the water problem in Iraq, Iraqi envoy Hussain Mahmood Alkhateeb said that the country aims to work on projects that will resolve the issue as part of their plans to utilize loans effectively.
by Özgenur Sevinç Feb 25, 2019 12:06 am

The Iraqi envoy said Baghdad is grateful for Ankara's reconstruction efforts in the country, adding that the two countries have been discussing possible projects to use the loans offered by Turkey in an effective way

Iraq's Ambassador to Ankara, Hussain Mahmood Alkhateeb, said that Iraq welcomes Turkey's efforts to contribute to the reconstruction of the country in the aftermath of the defeat of Daesh. The Iraqi envoy underlined that projects to rebuild the liberated cities, resolve the water problem in Iraq and open a new border gate with Turkey stand out as main possible areas to use the loan promised by Ankara as the two sides continue to discuss various projects.

Referring to Turkey's pledge of $5 billion in loans and investment for reconstruction last year at the Kuwait Conference, Alkhateeb said in an exclusive interview to Daily Sabah that they "are grateful for the offer from Turkey. Iraq in that conference had already proposed a wide range of projects for investment starting mainly from the areas which were occupied by the Daesh terrorist group and have been liberated by the Iraqi forces."

Stressing that the delegations of the two countries have been discussing possible projects for this loan, the ambassador said that Turkey attaches importance to the water problem in Iraq and aims for projects to resolve the issue as part of the plans to use the loans.

"We are really happy with the decision of President Recep Tayyip Erdoğan, as he appointed a personal representative to go to Iraq with a team of experts in order to discuss the water issue and to help Iraq overcome the challenges it faces, especially in the dry season," Alkhateeb said and stressed that the water problem in Iraq is one of the important issues between the two countries.

Following the visit of his Iraqi counterpart Barham Salih to Ankara in January, Erdoğan announced that he appointed Veysel Eroğlu as his special envoy to Iraq with the aim of addressing the water issue. In relation to Iraq's water problem, Erdoğan stressed that there are serious problems in water management and added that if the necessary steps are taken the problem might be solved in a couple of years, as this year, Iraq received high precipitation.

Alkhateeb stated that a Turkish delegation is set to visit Baghdad in the upcoming period to have talks regarding the issue, and a preliminary list of the group was received by Iraq. He highlighted that aside from projects to resolve the water problem, both Turkey and Iraq hope to realize the objective of opening a new border gate which is in the interest of both countries.

"The Iraqi delegation accompanied by Turkish personnel have already visited the area and a feasibility plan has been done by the Iraqi side," the Iraqi envoy said and stressed that as there is strong resolve from the two sides to realize this project the process has been accelerated.

"Turkey is also interested in using the loan in improving the infrastructure connected to this gate," he added and said that the border gate is significant since it will be part of a road which connects Europe, Turkey, Iraq, the Gulf and Asia.

The planned Ovaköy border gate will directly link Turkey to the south of Iraq to the Arabian Gulf through a network of highways and railways. In line with the border gate to boost economic ties, Iraq has been building the Al-Faw Grand Port which will be one of the biggest ports in the Middle East, the ambassador said.

Alkhateeb underlined that Iraq has invited Turkish companies to invest in this port for its particular importance.

For Turkey, the Kurdish Regional Government's (KRG) controversial referendum in 2017 to gain independence from Iraq indicated the need of increasing the number of border gates with Iraq to conduct trade. During the strained ties with the KRG, there were some restrictions at Turkey's Habur border gate, its southeast land crossing from northern Iraq.

The illegitimate referendum was heavily criticized by most regional and international actors, many warning that it would distract from Iraq's ongoing fight against terrorism and further destabilize the already volatile region.

Touching on the current state of ties between Baghdad and Irbil, the ambassador said that what happened was a wake-up call which made all realize that the future of Iraq lies in preserving the unity of the country.

"The KRG needs the rest of Iraq and vice versa. Our future is interlocked. We are on the right track to solve the problems," the ambassador said and added, "I need to reiterate our appreciation for Turkey's stance in the face of that serious challenge to the unity and stability of Iraq and the region."

The Iraqi envoy underscored that there will be high-level visits by Turkish officials to Iraq in the upcoming period to hold talks on a multitude of things including reconstruction projects.

"We are looking forward to an upcoming visit by Foreign Minister Mevlüt Çavuşoğlu," Alkhateeb said and added that they also expect a visit from Erdoğan himself after the local elections on March 31. 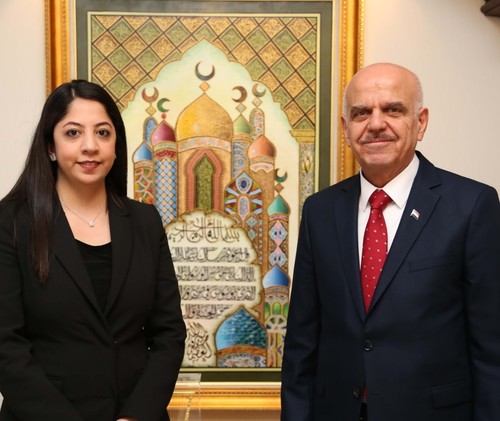 "The date is not fixed yet but we are promised that there will be a visit by President Erdoğan because we will have a new gathering of the High Level Strategic Council meeting between our countries," the ambassador said, underlining that this council is headed by the president of Turkey and the prime minister of Iraq.

He stated that during the meeting they are expected to sign several agreements and Memorandums of Understanding cementing seeds to further improve relations. Ministers from different ministries from both sides will also attend the meeting to discuss a wide range of issues to further develop relations and to contribute efforts for the reconstruction of the country following three years of a destructive war with Daesh.

Iraq calls upon countries to take foreign fighters' children back

As the country which suffered the most from Daesh, Iraq is continuing to eradicate the remnants of the terrorist group while at the same time exerting efforts to fight against the ideology of the group, the Iraqi envoy underscored.

"The physical presence of Daesh has been destroyed with the very high cost of blood and human souls," Alkhateeb said and stressed that "we sacrificed a lot to defeat Daesh with the help of the international community and our neighbors."

Commenting on the U.S. move to withdraw from Syria, the ambassador said that they welcome the decision.

"Daesh is really weak now; it does not need big armies to be defeated. Unless somebody tries to help them there will be no comeback of Daesh," the ambassador highlighted.

Referring to U.S. President Donald Trump's statements that the U.S. plans to keep its troops in Iraq to monitor and pressure Iran, Alkhateeb said that "the Iraqi government, political parties and parliament were clear in expressing that Iraq will not allow foreign presence in Iraq aiming at bringing any sort of harm to our neighbors."

He added, "We are a sovereign country and this is also a constitutional issue, as it has been stressed by the Iraqi government that foreign military personnel present in Iraq are there to help train Iraqi forces and provide intelligence support in fighting Daesh terrorists."

In relation to the ongoing efforts to fully eradicate Daesh, the ambassador pointed out that since the defeat of Daesh in 2017, Iraqi security forces have been continuing operations to discover and eradicate smaller hidden groups. He added that Daesh does not hold any ground anymore but are hiding in places called "rat holes."

The ambassador stressed that in the latest operation five suicide bombers with explosives strapped around their bodies, planning to carry out attacks, were killed in a car. It was also announced that Iraqi intelligence service dismantled the biggest ever discovered group of 120 Daesh members responsible for financing the group.

Regarding the situation of the captured fighters, he highlighted that "there is no doubt that those who were captured in Iraq will be brought to court and imprisoned in Iraq. The possibility of exchanging prisoners could be discussed according to the existing, or to be signed, agreements."

Yet, the ambassador stated that there is also the problem of families of these fighters which has been widely discussed by the international community.

Underscoring that there are thousands of Daesh fighters, including foreign fighters whose cases are continuing, the Iraqi envoy said, "We have the problem of what to do with their wives and children. Iraq has called upon the countries concerned to take back their children; if the mothers are acquitted by the court they could be also taken back to their countries."

"For instance, Turkey has already taken back some children and a number of Russian children and women who are citizens of Russia were taken back," Alkhateeb said and underlined that Iraq expects the international community's support.

As Daesh has been physically eradicated, officials have been stressing the significance of fighting the ideology of the terrorist group.

"We need programs to fight against the false ideology of this group which is indeed contrary to the teachings of Islam which is based on mercy," the ambassador said and stressed that with an aim of addressing this issue a conference was held in Baghdad recently for the third time, with the participation of representatives from nearly 60 countries.

Turkey has long been discussing the presence of the PKK terrorist group in Iraq, calling on Baghdad to increase efforts to eliminate the group which is a threat to the national security of both countries.

"It is the stated policy of the Iraqi governments since 2003 that Iraq is working toward having good relations with the countries of the world based on mutual respect and interest, with a special focus on the relations with our neighboring and Arab countries. The Iraqi constitution says that Iraq will never allow any group to bring harm to our neighbors using our territory; therefore, this is the policy of our government in this regard," the ambassador said and added, "We have succeeded in removing any armed presence of the outlawed groups in our cities."

The Iraqi envoy also added that there are more plans to strengthen the presence of Iraqi security forces in areas where the terrorists are harbored. Alkhateeb stressed, "Turkey is our neighbor, and the stability of Turkey is the stability of Iraq and vice versa." He also stated that Iraq will continue discussing with Turkish authorities the best ways to tackle this problem.

Evaluating the ties between Ankara and Baghdad, the envoy said that aside from enjoying deep-rooted historical and cultural ties, the challenges in the region indicate the necessity to have good relations between the two countries.

Alkhateeb emphasized that many steps can be taken to further enhance ties and pointed out that the Iraqi people are now more aware of the opportunities in Turkey's trade and tourism.

"Last year we had 1.5 million Iraqi people visiting Turkey," the ambassador said stressing that Iraqis were also number one among the foreigners buying property in Turkey for the last six months. He underlined that Ankara and Baghdad can build upon these historical and cultural ties to take relations to a new level.