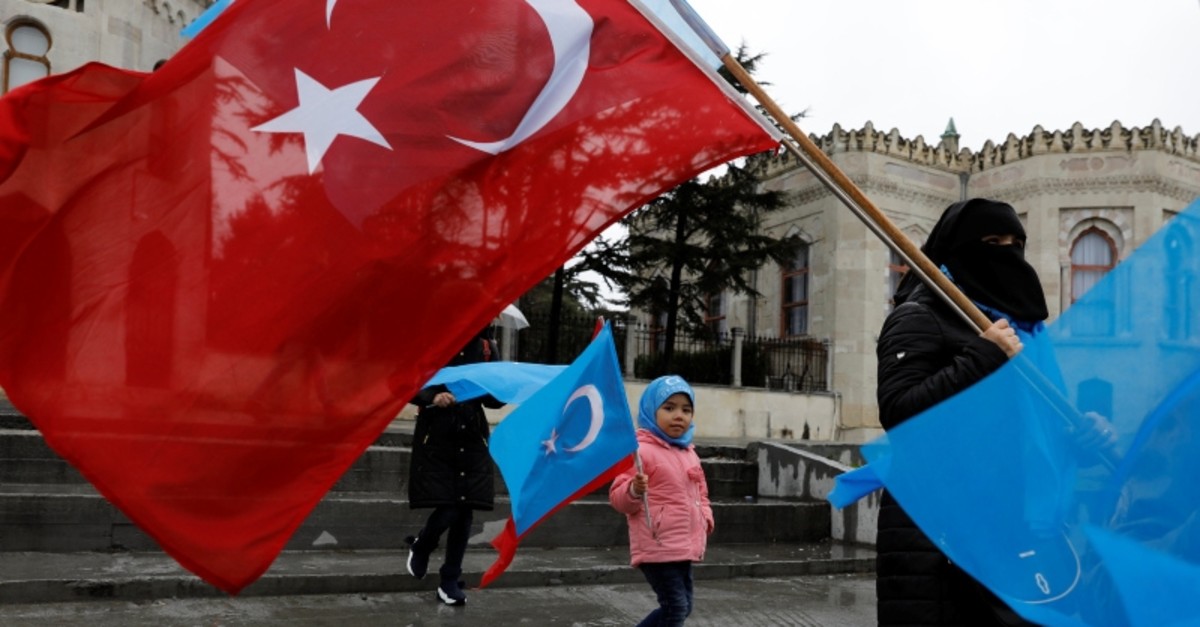 There are very concerning developments ongoing in China against Uighur Turks and other Muslim groups, Foreign Minister Mevlüt Çavuşoğlu said, urging the country to respect the rights of minorities.

Attending the first session of the 40th United Nations Human Rights Council (OHCHR) in Geneva, Switzerland on Monday, Çavuşoğlu addressed the conference on the matter of disarmament.

Giving a separate speech at the same session, Çavuşoğlu called on the Chinese government to separate terrorists from innocent people and underscored that there is a violation of human rights going on against Uighur Muslims.

Çavusoğlu said Turkey recognized "China's right to combat terrorism," but urged the country to respect freedom of religion and to safeguard Uighurs' and other Muslims' cultural identities.

Çavuşoğlu then inserted a line into his remarks, adding: "And I have to underline that we support the One China policy."

He was referring to China's stance that the country encompasses Taiwan and autonomous regions including Xinjiang and Tibet.

China's western Xinjiang Uighur Autonomous Region is home to around 10 million Uighurs. The Turkic Muslim group, which makes up around 45 percent of Xinjiang's population, has long accused China's authorities of cultural, religious and economic discrimination. Up to 1 million people, or about 7 percent of the Muslim population in Xinjiang, have been incarcerated in an expanding network of "political re-education" camps, according to the United Nations.

In a report released in last September, Human Rights Watch blamed the Chinese government for a "systematic campaign of human rights violations" against Uighur Muslims in northwestern Xinjiang, an autonomous region in the country.

Turkey, which shares cultural and religious ties with the Uighurs, has been the only majority Muslim country to criticize Beijing over a wide-ranging crackdown of religion and minority languages. The Foreign Ministry called China's treatment of Uighurs "a great cause of shame for humanity."

Turkey always attaches importance to human rights despite fighting simultaneously against multiple terror threats, in particular against the Gülenist Terror Group (FETÖ), the PKK, its Syrian affiliate the People's Protection Units (YPG) and Daesh, Çavuşoğlu tweeted after the session ended.

"Disarmament, nonproliferation and armed conflict are critical for global safety, security and peace. They are of greater value during times of instability and uncertainty," Çavuşoğlu said. "On its part of the world, Turkey is directly confronted by multitude risks and threats. We are fighting with various terrorist organizations at the same time from Daesh to the PKK, the PYD [Democratic Union Party], YPG, and FETÖ, while the conflict in Syria is almost in its ninth year."

During the conference Çavuşoğlu also held bilateral meetings with his counterparts and the heads of U.N. including Human Rights chief Michelle Bachelet. Making a statement after their meeting, Çavuşoğlu said in his tweet that he congratulated Bachelet's new tenure and they spoke about Turkey's efforts to shed light on the murder of late journalist Jamal Khashoggi.

"Wished @ambachelet a successful tenure. U.N. praises our principled and transparent stance on the murder of Jamal Khashoggi," Çavuşoğlu tweeted.

Khashoggi was killed and dismembered by a group of Saudi operatives in the country's consulate in Istanbul on Oct. 2, 2018. Initially denying and later downplaying the incident as an accidental killing in a fistfight, almost three weeks after the disappearance Riyadh finally admitted that Khashoggi was murdered in a premeditated action but denied any involvement of the royal family. The incident was blamed on lower-level officials, including five that are now facing the death penalty for their involvement. Despite more than 100 days passing since his assassination, the whereabouts of his body remain unknown.