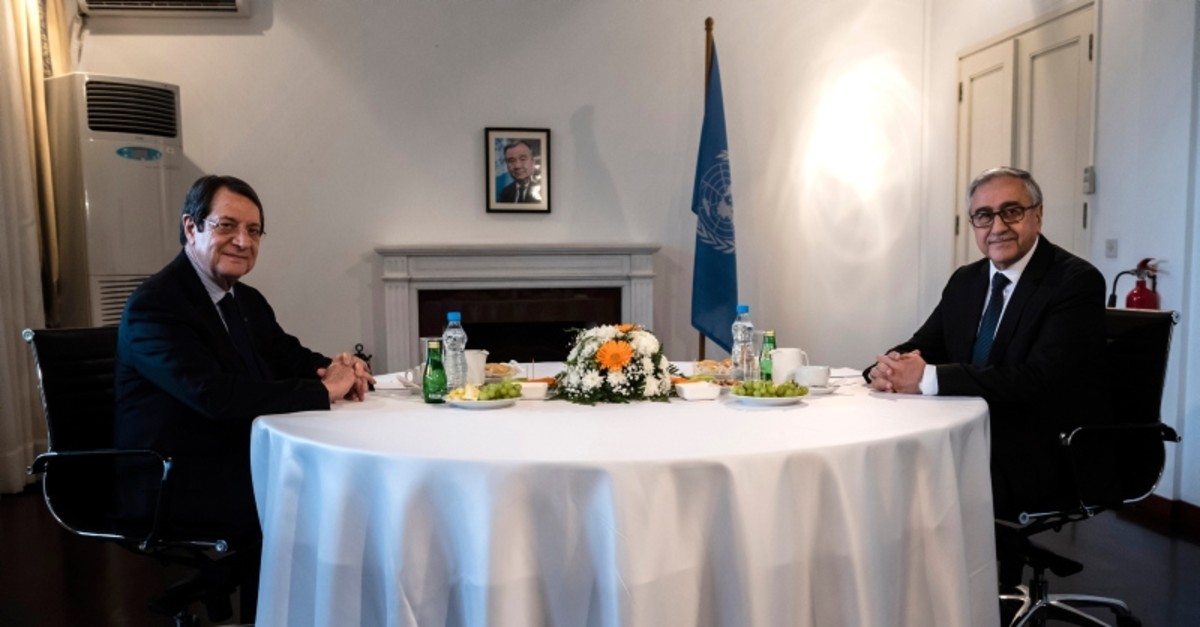 Turkish Cypriot leader Mustafa Aku0131ncu0131, right, and Greek Cypriot leader Nicos Anastasiades pose for a photo during their meeting at a U.N compound inside the U.N buffer zone in divided capital Nicosia, Cyprus, Tuesday, Feb. 26, 2019. (AP Photo)
by Feb 26, 2019 12:00 am

The United Nations on Tuesday hosted an informal meeting between the leaders of the divided island of Cyprus, aimed at reviving stalled peace talks.

Turkish Cypriot leader Mustafa Akıncı and his Greek Cypriot counterpart Nicos Anastasiades met for the first time in nearly four months at a U.N. compound in the island's buffer zone.

"They had a constructive exchange of views in a cordial atmosphere," the U.N. said after the meeting, which was hosted by Elizabeth Spehar who heads the body's Cyprus peacekeeping mission.

It said the leaders were "committed to intensifying" confidence-building measures "with the objective of improving the daily lives of all Cypriots."

The measures discussed include proposals already tabled in recent years, such as improving mobile phone connectivity across the island.

Despite moves to improve relations such as two new border crossings opening in November, tensions continue between the two sides over offshore energy resources claimed by both administrations.

It has seen an on-and-off peace process in recent years, including the latest initiative in Switzerland under the auspices of guarantor countries Turkey, Greece and the U.K. collapsing in 2017.

In his latest report published last month, U.N. Secretary-General Antonio Guterres also reiterated he has confidence that "prospects remain alive for a comprehensive settlement within a foreseeable horizon."