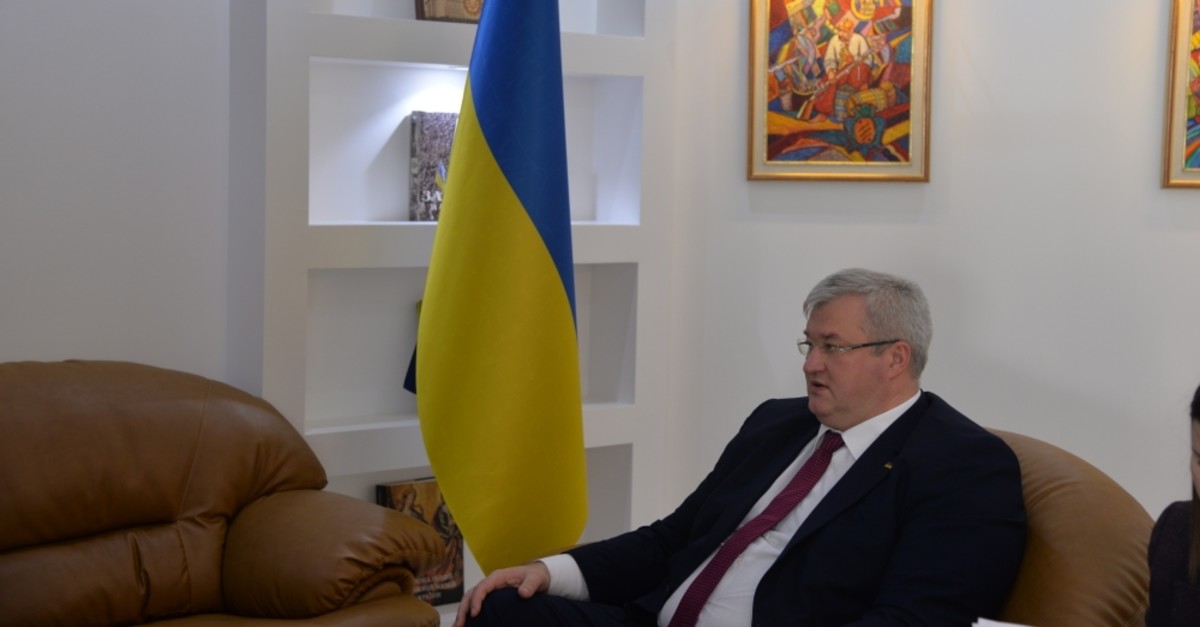 Ukrainian Ambassador to Ankara Andrii Sybiha Sybiha indicated that cultural interaction is one of the most significant pillars of bilateral relations between Ankara and Kyiv.
by Mustafa Kırıkçıoğlu Mar 18, 2019 12:09 am

Two black sea neighbors, Turkey and Ukraine have been gradually developing their mutually beneficial cooperation and strategic alliance on a wide range of issues, including political, economic, military and cultural aspects, as bilateral trade has reached almost $4 billion

Turkey and Ukraine, two Black sea neighbors, have deepened their trust and cooperation in political, economic, military and cultural aspects. Their bilateral relations have been gradually developing since Ukraine gained strategic partnership status with the establishment of the High-Level Strategic Council in 2011. Speaking to Daily Sabah in an exclusive interview, Andrii Sybiha, Kyiv's ambassador in Ankara, highlighted the significant potential for more collaboration between the two countries on wide range of issues. "The strategic alliance between the two countries has reached a very good point, based on the interests of both countries," he said.

Stressing that Turkey and Ukraine are connected and complimentary to each other, not competitors, particularly in economic terms, Sybiha emphasized the bilateral cooperation in this area is built on a "win-win" principle.

"Bilateral trade has reached almost $4 billion, but I believe that this amount does not reflect the real potential between the two countries," the Ukrainian ambassador said. Sybiha said that both presidents have instructed their governments to speed up their free trade agreement's implementation process at the eight meeting of the High Level Strategic Cooperation Council that convened in Istanbul in last November, adding that the deal will give help increase trade volume.

With the implementation of free trade deal, the two countries aim to reach $10 billion in bilateral trade. "The two sides have reached an agreement on 96 percent of the items, which are the subject of the free trade agreement. In order to give an impetus to the negotiations, we are working on a 2-to-2 formula, which refers to formation of a working group consisting of the Trade and Foreign ministers of both countries," he said.

Sybiha indicated that cultural interaction is one of the most significant pillars of bilateral relations between Ankara and Kyiv, highlighting the gradually increasing number of tourists from both countries visiting each other.

Turkey is among the most popular destinations for Ukrainian tourists, who mostly prefer Antalya, a popular resort city with year-round warm weather. The two countries signed an agreement to allow passport-free travel for their citizens in 2017, which has boosted the bilateral tourist flow. While nearly 300,000 Turkish people visited Ukraine last year, number of Ukrainian tourists in Turkey has reached about 1.4 million. Also, 3,200 Turkish students continue their education in Ukrainian universities. Touching upon the various events planned by Ukrainian diplomatic missions in Turkey in the near future, Sybiha said they aim to contribute presentations of Ukrainian music, cuisine, art and cinema in Turkey. "We will invite a folk dance group with 100 members to the Ankara Music Festival. Also, we are planning to organize Ukrainian cuisine days in April in the capital as well as organizing a Ukrainian contemporary art exhibition. In Istanbul, Ukrainian ballerinas will present a show at the end of April," he said.

Stressing that dialogue for the production of joint land and air vehicles has been ongoing between the two strategic partners, the Ukrainian ambassador highlighted recent acquisition of Turkish unmanned aerial vehicles (UAVs) by Kyiv as well as numerous other agreements between the two militaries.

"I also need to highlight cooperation between ASELSAN and the Ukrainian military. There are lots of recent agreements signed, including the purchase of communication systems," he said. 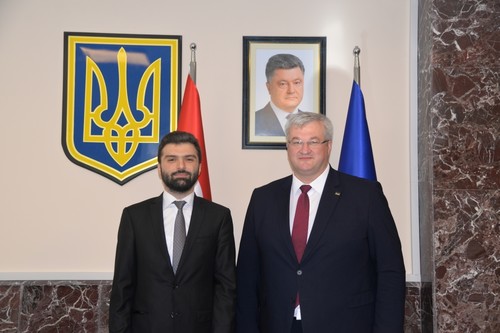 Ukraine received earlier this month the Turkish Bayraktar Tactical Block 2 (TB2) UAVs, which were purchased from Turkey in January. The militaries of the two countries are working on many joint ventures including production of the new AN-188 military cargo plane. Also, in 2017, while Turkey's ASELSAN signed a contract agreement with SFTE Spets Techno Export to supply Zaslon-L'Active Protection Systems, ROKETSAN signed a collaboration agreement with the same company for the joint development of explosive reactive armor (ERA).

Sybiha added that they want to produce a joint aircraft in the Antonov factory in Ukraine, as the country is one of several states in the world that is able to manufacture a plane on its own.

AUTOCEPHALY: A SECOND INDEPENDENCE FOR UKRAINE

The ambassador touched upon the importance of the autocephaly mandate given to the Ukrainian Church, defining it as a "spiritual independence" of the country, coming after three centuries of hiatus.

"The 40 million citizens of Ukraine deserved this decision, the right of praying in their own language, instead of an aggressor's [Russian]," Sybiha said.

Last November, the synod of the Ecumenical Patriarchate, the seat of the spiritual leader of some 300 million Orthodox Christians worldwide, gathered in Istanbul in a bid to approve an official "tomos," granting the Ukrainian Orthodox Church autocephaly. The decision ended more than 300 years of Moscow's control over Orthodox churches in Ukraine and affects millions of believers in Russia and Ukraine. Sybiha also criticized the "hostile attitude" of Russian religious authorities since the beginning of the conflict between separatists and the Ukrainian army and annexation of Crimean peninsula by Russia in 2014, adding that Ukraine will give its citizens the freedom to choose their own church.

"Think about an Imam in Turkey, who refuses to pray for a dead Turkish citizen. I cannot even imagine it. But it was, unfortunately, the situation in Ukraine, because priests of Russian Church were declining to pray for deceased Ukrainian soldiers who died in battles against separatists. Now, our citizens have the right to choose the church they want to belong to," he said.

Touching upon Ukraine's NATO and European Union accession talks, Sybiha said that membership in both blocs is the will of the Ukrainian people and the country would not backtrack from efforts to reach these targets.

"Regardless of the winner of the upcoming elections, our NATO and EU aims are already enshrined in the constitution, reflecting the Ukrainian people's strong will to remain on this course," he said. The new government in the country that took power in February 2014 committed to seek NATO and EU memberships, after former President Viktor Yanukovych was dislodged following massive protests triggered by his refusal to sign an association agreement with the EU. Public opinion swayed considerably in favor of joining NATO following Russia's annexation of Ukraine's Crimean Peninsula and its involvement in eastern Ukraine in 2014.

CRIMEAN ANNEXATION SHOULD REMAIN ON AGENDA

The Ukrainian envoy said the Crimean people continue their resistance against the oppressive policies of the Russian authorities in the peninsula, adding that Kyiv appreciates Ankara's sensitivity on Ukraine's security and territorial integrity.

"More than 70 activists were arrested in five years. It is not a 'frozen dispute,' and we should show effort to keep the annexation on the agenda," he said.

Russia annexed southern Ukraine's Crimean Peninsula in March 2014 following a referendum. The international community overwhelmingly regarded the referendum as illegal under international law and rejected the annexation. Some countries, including the U.S. and a number of EU states imposed political and economic sanctions against Moscow following the occupation.