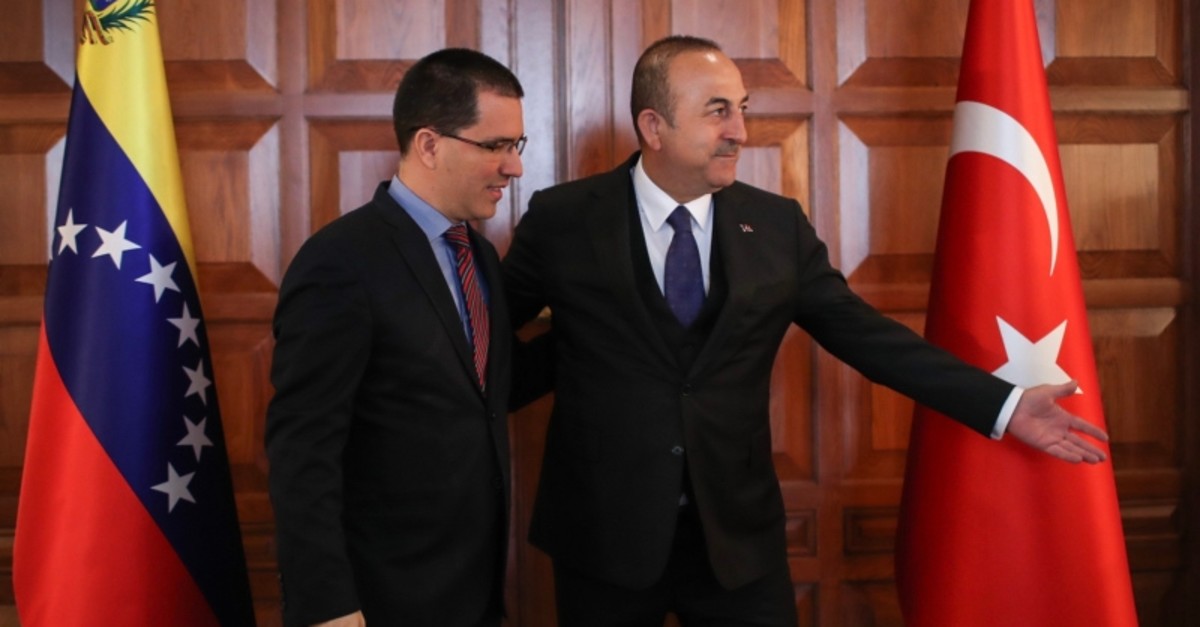 Turkey on Monday reiterated its support to Venezuela's legitimate government and President Nicholas Maduro, who has been facing mounting pressure from Washington and its allies in the region, during a visit by the country's foreign minister to the capital Ankara.

Foreign Minister Mevlüt Çavuşoğlu highlighted Monday that Turkey's support for Venezuela will continue in the upcoming period as the developments in the country might affect the whole region.

"Turkey will continue to support Venezuela as problems there could affect all of Latin America, even the Caribbean," Çavuşoğlu said at a press conference in Ankara with his Venezuelan counterpart Jorge Arreaza.

Commenting on the support given by Turkey, Arreaza underlined that, "Turkey is showing exemplary friendship to Venezuela in a difficult time."

Venezuela plunged into a political crisis in January when Juan Guaido, head of the opposition, declared himself interim president and was supported by the U.S. and dozens of other countries in January. The U.S. has imposed oil sanctions and other economic penalties on Venezuela in an attempt to force Venezuelan President Nicolas Maduro out of power, but he has yet to show signs of backing down. Turkey, Russia and China support Maduro and have condemned undemocratic means to end Maduro's term.

"We believe that Venezuela will overcome these difficult times in solidarity. We will continue to support Venezuela, and we are by the side of Venezuelan people," Çavuşoğlu said, reiterating that Turkey recognizes Maduro as the legitimate president of Venezuela as well as his administration.

The foreign minister also underscored that Turkey is against any foreign intervention aiming to change legitimate governments using undemocratic methods and unilateral sanctions.

Answering a question about Turkey's ongoing trade with Venezuela, Çavuşoğlu said the unilateral steps aiming at restricting independent countries' trade with each other are against international law.

"While seeing the difficulties that Venezuela faces, it is unthinkable for us not to trade with this country," he pointed out.

Çavuşoğlu to meet US counterpart in Washington

Regarding his participation in the U.N. General Assembly on Tuesday with the agenda of the recent massacre in New Zealand, Çavuşoğlu said he will also deliver a speech there.

He also informed that the main construction of the Turkish House in New York, right across the U.N. headquarters, has been completed. Following his New York visit, Çavuşoğlu will head to Washington to participate in the NATO foreign ministers meeting which will be held on the 70th Anniversary of the founding of the alliance.

According to the statement released from the Turkish Foreign Ministry, "At the meeting, allied ministers of foreign affairs will discuss the importance of the transatlantic bond as well as of allied solidarity and coherence."

"During his visit to the United States, Minister Çavuşoğlu will hold bilateral meetings in Washington, D.C. and gather with the Turkish-American community, business circles and local authorities as well as representatives of the Muslim community in New York, Miami and North Carolina."

In relation to his visit Çavuşoğlu said that he will hold various bilateral talks with foreign ministers there including U.S. Secretary of State Mike Pompeo. He added that he is also set to hold a meeting with U.S. National Security Adviser John Bolton. In the meeting between the officials, significant issues such as the planned safe zone in northern Syria are expected to be discussed.