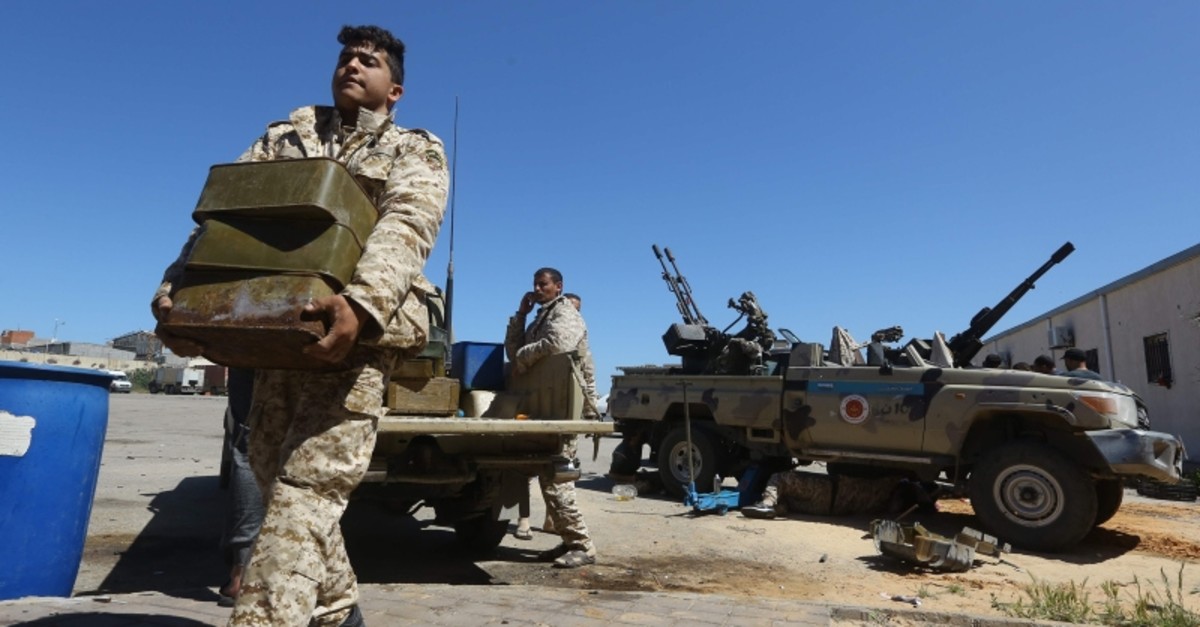 Fighters from a Misrata armed group loyal to Libyan Government of National Accord (GNA) prepare their ammunition before heading to the on April 9, 2019. (AFP Photo)
by Compiled from Wire Services Apr 09, 2019 3:42 pm

The sources, who spoke on condition of anonymity, said Çavuşoğlu had a phone conversation with Hunt and Mogherini.

On Monday, Çavuşoğlu discussed the latest situation in Libya with his Italian counterpart Enzo Moavero Milanesi over the phone.

The renewed conflict in a nation splintered since the 2011 toppling of Muammar Gaddafi also risks draining medical supplies, the World Health Organisation (WHO) warned.

U.N. chief Antonio Guterres on Monday appealed for an immediate halt to fighting in Libya, after strongman Khalifa Haftar's forces claimed an airstrike on Tripoli's only functioning airport.

Thousands have fled violence in the capital city, according to the United Nations, since Haftar launched a surprise assault last week which has left dozens dead.

Secretary-General Guterres "urges the immediate halt of all military operations in order to de-escalate the situation and prevent an all-out conflict," said a U.N. statement late Monday.

He "strongly condemns the military escalation and ongoing fighting in and around Tripoli, including the aerial attack today by a Libyan National Army (LNA) aircraft against Mitiga airport."

A warplane belonging to East Libya-based forces struck the destroyed Tripoli International Airport on Tuesday, according to eyewitnesses.

The oil-rich North African country has been rocked by violent power struggles between an array of armed groups since the NATO-backed overthrow of dictator Moamer Kadhafi in 2011.

The U.N.-backed Government of National Accord (GNA) controls the capital, but its authority is not recognized by a parallel administration in the east of the country, backed by Haftar.

The strongman has defied international calls to halt his advance on Tripoli, including from the U.N. Security Council and the United States.

Haftar is a former Kadhafi military chief who has emerged as a major player in Libya's political struggle.

Having seized control of much of eastern Libya -- and buoyed by a series of victories in the desert south -- he turned his sights on Tripoli, vowing to "cleanse" it of "terrorists and mercenaries."

His offensive threatens to plunge the country into a full-blown civil war and once again thwart diplomatic efforts to find a solution to Libya's woes.