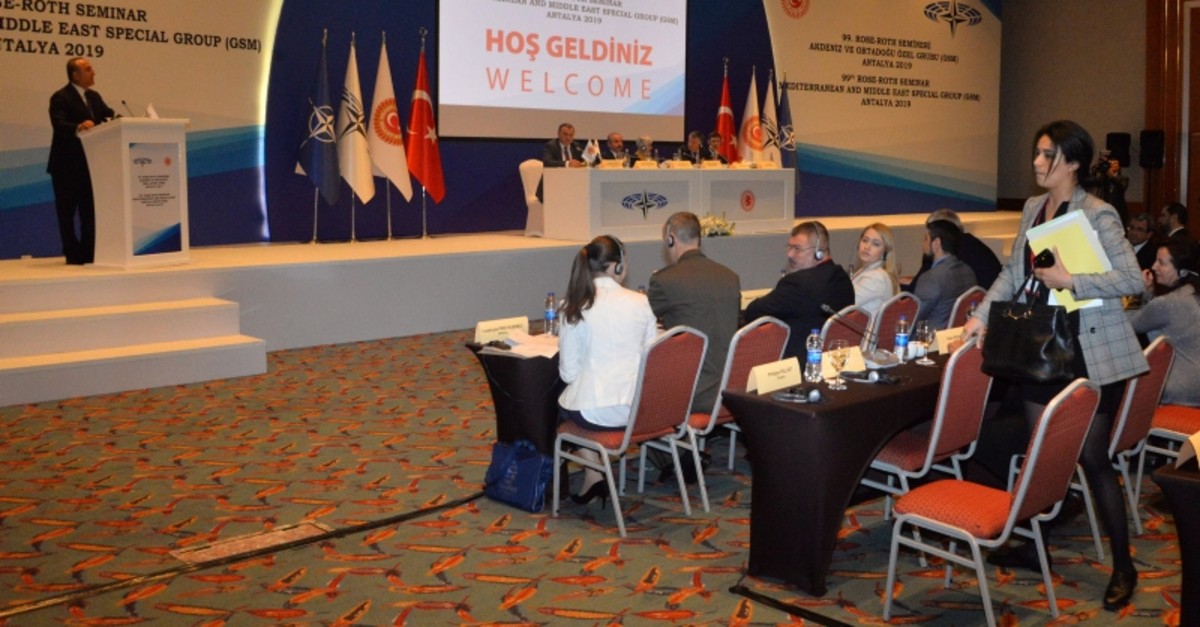 Ankara strongly criticized the stance of Italy and France attempting to recognize the events of 1915 in Armenia as "genocide," stressing that the allegations are inconsistent with historical facts.

"France is the last country that would give Turkey lessons over genocide and history because we did not forget what happened in Rwanda and Algeria. France needs to look into its own dark history," Foreign Minister Mevlüt Çavuşoğlu said on Friday, referring to the French President Emmanuel Macron's decision to declare April 24 as a day of commemoration in France for the so-called "Armenian genocide."

The statement of the foreign minister came during the NATO Parliamentary Assembly's 99th Rose-Roth Seminar in Antalya, after Sonia Krimi, a French parliamentarian, said that the criticism by Parliament Speaker Mustafa Şentop over France's move shocked her.

Stressing that the decision taken by the French president only serves to politicize history, Şentop said on Friday that the baseless allegations are voiced because of political concerns.

Ankara does not accept the alleged genocide but acknowledges that there were casualties on both sides during the events of World War I. Ankara has repeatedly proposed the creation of a joint commission of historians from Turkey and Armenia plus international experts to tackle the issue.

Following the comments by Çavuşoğlu, Krimi left the meeting. "We see how respectful and polite you are. You do not like to hear the truth, we will continue telling the truth. You will get used to this," Çavuşoğlu said.

In relation to the issue, on Thursday National Defense Minister Hulusi Akar conveyed Turkey's discomfort about the French president's decision to his French counterpart Florence Parly in a phone call.

On his official Twitter account, Kılıçdaroğlu said on Friday: "French President Macron's declaring April 24 as a commemoration day for 'Armenian Genocide' is unacceptable. The resolving of problems between Turkey and Armenia is possible with dialogue between them; not with third parties' insolent interventions."

Şentop also criticized the passing of a motion by Italy's Parliament to recognize the 1915 events in Armenia as "genocide," noting that the parliament is exploiting history and law by attempting to give a decision by substituting itself as an international court.

In relation to the recent move by the Italian Parliament, Şentop said, "The Italian House of Representatives has attempted to give a decision about a crime that is specifically defined in international law as genocide by acting in place of international courts; and has exploited history and law," and added, "We would like to remind Italy of its role in World War II."

The proposal for recognizing the 1915 events in Armenia as "genocide" was voted on Wednesday and the motion was approved by 382 votes with none against and 43 abstentions.

The decision faced furious backlash from Ankara as officials said it is prompted by political agendas.

The Foreign Ministry said in a statement, "The motion of the Italian House of Representatives dated April 10, 2019, is a new example of the use of Armenian claims as a tool for domestic political interest."

The ministry noted that the proposal was prepared by Italy's far-right Lega Nord party, stressing that the "allegations being brought up before the elections or in the context of opposition to Turkey clearly reveal the political nature of these allegations and that they are inconsistent with historical facts."