Turkey, Iran to continue cooperating to find way out of Syrian crisis 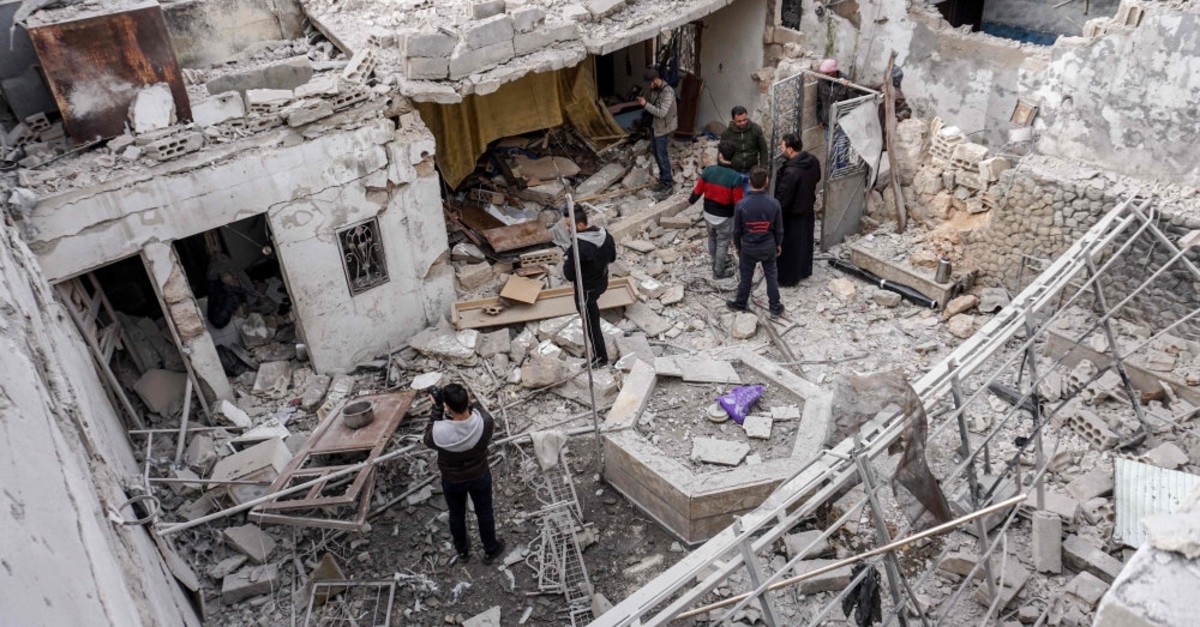 Syrians inspect damage from a reported regime airstrike at a civilian residence in the northern Idlib province, March 10, 2019.
by Özgenur Sevinç Apr 18, 2019 12:13 am

Turkey and Iran will continue to work together in the Astana process with the aim of reaching a political solution in Syria, particularly in Idlib

Wednesday, Turkey and Iran reiterated their commitment to efforts to reach a permanent peace in Syria, establishing a constitutional committee and preserving de-escalation in Idlib province. "For permanent peace in Syria and preserving the cease-fire in Idlib, we continue to work together to coordinate various issues, including the U.S.' decision to withdraw from Syria. The whole world sees the sincere efforts to establish the constitutional committee," Foreign Minister Mevlüt Çavuşoğlu said yesterday during a press conference with his Iranian counterpart Javad Zarif. Stressing that in the last three years the Astana process has substantially contributed to peace in Syria, Zarif said that Iran along with Turkey and Russia would continue joint efforts. Prior to his visit to Ankara, Zarif paid a visit to Syria to hold meetings.

In relation to these meetings, Zarif said that he was in Syria the last two days and had a long meeting with Bashar Assad. "I will present a report to President Erdoğan about this," Zarif added. Following the meeting with Çavuşoğlu, Zarif was received by President Recep Tayyip Erdoğan.

Even though Turkey and Iran are not of one mind over the Syrian crisis, they have been working together in the Astana process to reach a political resolution. While Iran still backs the Syrian regime, Turkey has been indicating that the regime, which causes the death of many Syrians, has already lost its legitimacy.

Zarif's visit comes a week before the 12th Astana talks, which will be held in the Kazakh capital of Nursultan on April 25-26. The first meeting of the Astana process was held in Turkey in January 2017 to bring all warring parties in the Syrian conflict to the table and facilitate U.N.-sponsored peace talks in Geneva.

The war in neighboring Syria, which erupted in 2011, has had various implications for Turkey. Fleeing the war in Syria, many Syrian took refuge in Turkey, which pursued an open door policy. Turkey hosts nearly 4 million refugees and exerts all efforts to meet their needs. Furthermore, since the power vacuum in Syria was filled by terrorist groups such as the People's Protection Units (YPG), Turkey has faced threats targeting its national security.

Since the beginning of the crisis, Turkey has been highlighting that all terrorist groups must be cleared from Syria and the territorial integrity of Syria should be preserved. Hundreds of thousands of people have been killed and more than 10 million others displaced, according to UN officials.

To ensure its border security, Turkey seeks to set up a safe zone and holds talks with the U.S. to hammer out a road map for a possible area that will be free of terrorists.

Aside from talks with the U.S., Turkey maintains its talks with Russia to maintain the de-escalation in Syria's Idlib region. Previously, Turkey and Russia reached the Sochi deal, which prevented the regime's imminent operation in Idlib.

Commenting on the Astana process, Russian Foreign Minister Sergei Lavrov said yesterday: "The Astana process is the only viable mechanism for efforts in general political issues, enabling progress in the Syrian issue, fighting against terrorism in the field and easing the humanitarian situation."

He also noted that the Syrian Constitutional Committee must be established soon and added that the situation on the ground is not an obstacle to that.

Touching on sanctions imposed by the U.S. over Iran, Çavuşoğlu said that on various occasions Turkey voiced opposition to these sanctions.

"Such steps have put the region's stability, peace and economic development at risk. As Turkey, we are against that because we want peace and stability in our region," Çavuşoğlu said and stressed that Turkey is disquiet as the Iranian people are affected by these sanctions. The U.S. re-imposed sanctions on Iran in November after pulling out of a 2015 nuclear accord between it and six world powers. The sanctions have already halved Iranian oil exports.

"Our ministers expressed Turkey's concerns to U.S. counterparts in a recent meeting," Çavuşoğlu said, in reference to Treasury and Finance Minister Berat Albayrak and Trade Minister Ruhsar Pekcan's visit to Washington, where they met with top U.S. officials, including President Donald Trump.

Following the re-imposition of sanctions on Iran, the U.S. granted waivers to eight nations, including Turkey, in November. Officials in Ankara said that they expected the U.S. to extend Turkey's waiver.

Answering a question about the impact of sanctions on bilateral ties, Çavuşoğlu said Turkey and Iran needed to keep working to raise their bilateral trade to a target of $30 billion.

"Along with the existing mechanisms, we evaluated how we can establish new mechanisms, like INSTEX, how we can remove the obstacles before us and before trade," he said, adding, "What is important here is the solidarity and determination between us."

To avert sanctions, France, Germany and Britain have opened a new channel for non-dollar trade with Iran called The Instrument In Support Of Trade Exchanges (INSTEX).

"We will not allow the U.S. to affect our ties with other countries," Zarif said. The Iranian foreign minister also noted that the U.S. has been violating international law by recognizing Jerusalem as "capital of Israel," declaring Israeli sovereignty over the Golan Heights and listing Iran's Revolutionary Guards as "terrorists." The moves were also criticized by Çavuşoğlu who said that listing foreign national armies, as terror groups would cause dire cracks in the international system.

In an unexpected move, on April 8 the U.S. president said he would formally designate the force a "terrorist organization." Following the decision, the Iranian parliament ratified a bill designating the U.S. Central Command (CENTCOM) as a "terrorist organization." Regarding the issue, Presidential Spokesperson İbrahim Kalın said on Tuesday that Turkey expects the Trump administration to extend an existing sanctions waiver that is set to expire at the end of May to allow Turkey to continue importing Iranian oil.

"We are expecting an extension for Turkey," Kalın said. "We have conveyed this message to our U.S. colleagues," he added.