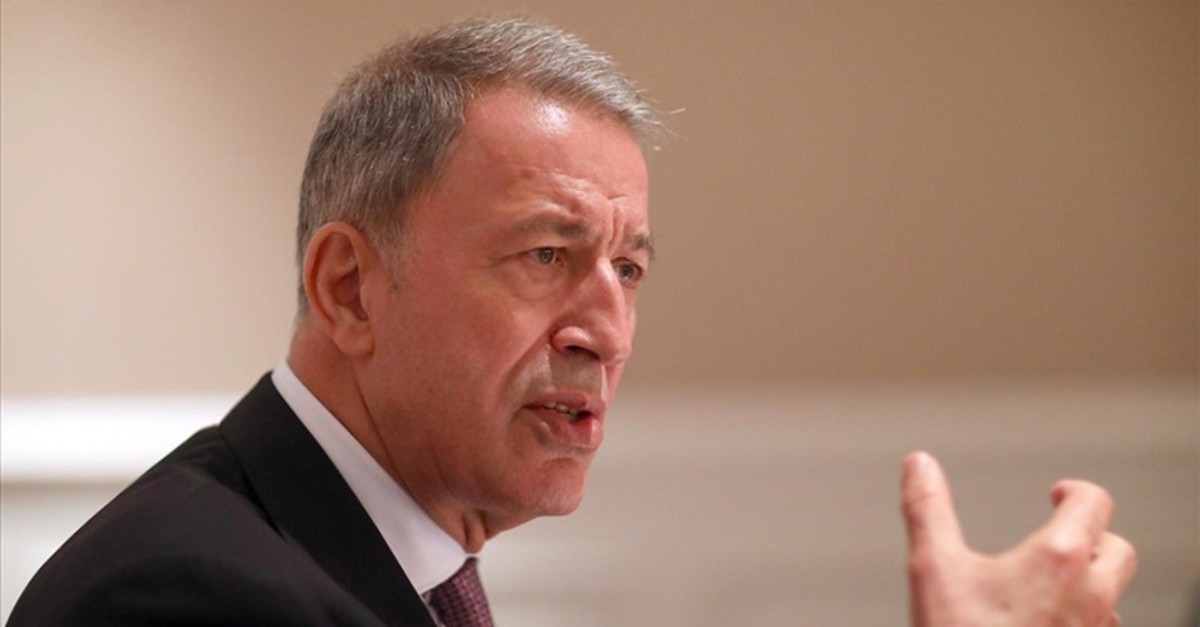 Defense Minister Hulusi Akar on Saturday urged Greece to take the necessary measures to adhere to the demilitarized status of the Aegean islands, as stipulated by international law and treaties.

Akar said Greece violates international law and treaties by arming the Aegean islands, emphasizing that not only do these actions violate international law, but also the neighborly friendship between Turkey and Greece.

"I am expecting my Greek colleague to take necessary measures in this and other issues within the framework of our sincere, constructive and good relations," Akar told reporters following a meeting with the top brass of the Turkish Armed Forces (TSK) at the Ministry of National Defense in Ankara.

"We are in favor of good neighborly relations. We expect all our neighbors to behave in the same way," Akar said.

Akar said that Turkey is working to solve the problems in the Aegean, Mediterranean and Cyprus by peaceful means through dialogue.

He underlined, however, that "it is known by everyone that Turkey is extremely committed to the protection of our rights and interests under international law."

Greece and Turkey have been at loggerheads over demarcation of maritime border in the Aegean. A decades-long dispute between Turkey and Greece over the uninhabited Aegean islets brought the two countries to the brink of armed conflict in 1996.

Energy exploration in the Eastern Mediterranean, particularly around the divided island of Cyprus, is among the contentious issues between the two countries.

The geopolitical factor of energy – an element experts and policymakers describe as a guarantee for connection and collaborative dynamic in the long term – has so far proved otherwise when it comes to the Eastern Mediterranean. With a view of protecting its own interests and the rights of the Turkish Cypriots, Turkey has been present in the region with seismic survey vessels and drillships.

Turkey and Turkish Cypriots vouch for an equitable share of the resources in the respective region, which is conditioned upon the peace progress in the island. The political conflict on the island which has not been resolved since 1974 is considered a primary reason impeding the exploitation of the resources among the regional people.

Cyprus has been divided since 1974 when a Greek Cypriot coup followed decades of violence against the island's Turks and Ankara's intervention as a guarantor power. The island has seen an on-and-off peace process in recent years, including the collapse of a 2017 initiative in Switzerland under the auspices of guarantor countries Turkey, Greece and the U.K.