France not concerned with truth of 1915 events, President Erdoğan says 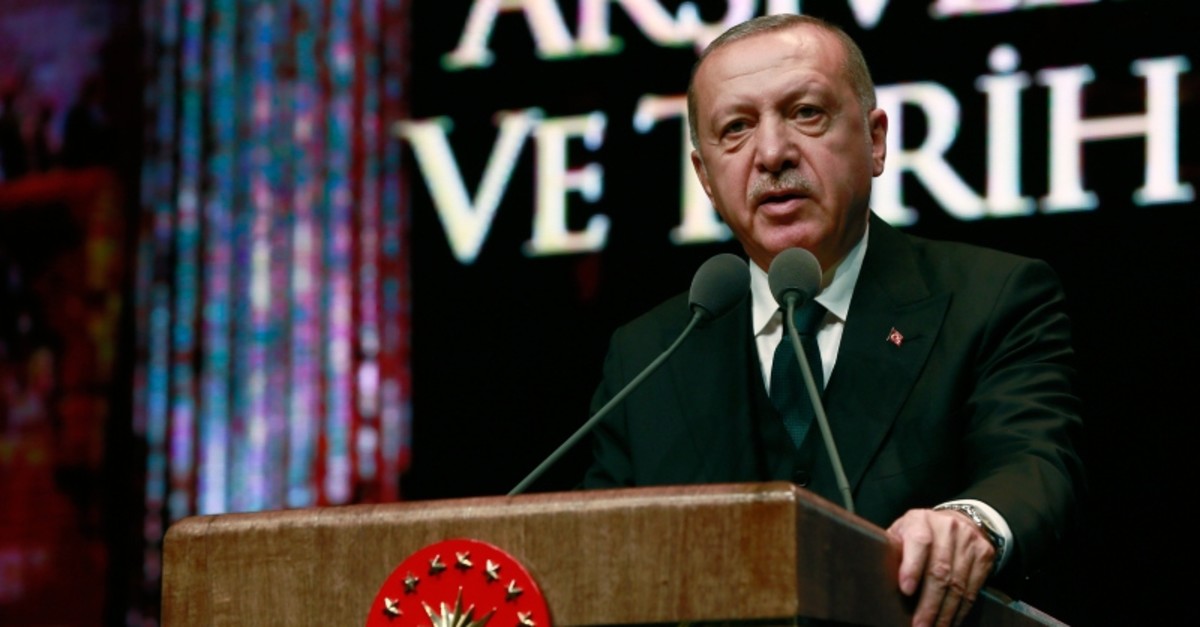 Those who stir trouble with the so-called Armenian genocide allegations, particularly France, have "no concern about the truth," President Recep Tayyip Erdoğan said Wednesday, urging those who are concerned with the issue to come and inspect Turkey's Ottoman-era archives.

"When we dig deeper into genocides, massacres, and human rights violations, we see the same countries that make noise about democracy and freedom," Erdoğan told a symposium on archives and historical research in the capital Ankara.

"Those who lecture Turkey on human rights, democracy, the Armenian issue, and the fight against terrorism all have a bloody history," he added.

"Turkey's archives are fully accessible", Erdoğan said, calling on Armenians and third parties to research the 1915 events. He also said that no group or state has been able to prove claims about the Armenian issue through archival evidence.

During his speech, Erdoğan said that all archives apart from Parliament and intelligence units are now being administered centrally.

Erdoğan's remarks come in the wake of France declaring a day of commemoration of the so-called genocide claims. France, housing a significant Armenian community over its ties with the Levant and post-World War I mandate rule in Syria - where most Armenians in Anatolia were relocated - was the first European country to recognize the events as genocide in 2001 and Macron announced the national day of remembrance in February this year, saying that his country "knows how to look history in the face."

That drew a furious response from Erdoğan who called Macron a "political novice" and urged him to focus on massacres committed by French troops during the colonial era.

"No country has the right to interfere with disputes regarding the history of others," said Maxime Gauin, an academic from the History Department of the Middle East Technical University (METU-ODTÜ), to Daily Sabah. Gauin gave an example from France's own history of brutality – France's suppression of the Armenian Legion in 1920.

"A key issue for the future is the capacity of the Turkish side to present its arguments in academia and the media of Western countries. It means the coordination of efforts beside the strictly Turkish disputes. Otherwise, nothing will change," Gauin said.

Armenians commemorate the massacres on April 24 — the day in 1915 when numerous Armenian intellectuals suspected of links with separatist groups, harboring nationalist sentiment and being hostile to Ottoman rule were rounded up in then-capital Istanbul.

French Prime Minister Edouard Philippe is to lead the commemorations by giving a speech and laying flowers at a Monument for the Armenian Genocide erected on the northern bank of the river Seine in April 2003.

Meanwhile, the Turkish Presidency's Communications Director Fahrettin Altun said Wednesday the events of 1915 should be discussed by taking into account both sides' pain and suffering and not just one point of view, calling for a balanced and constructive approach to the issue.

Altun cautioned against using the tragic incident as a political tool of manipulation, and said it should be discussed "in the light of (historically) accurate and true information," away from third parties' one-sided dispositions.

"There is no problem that Turks and Armenians, who have been living together for 800 years, cannot solve today through genuine dialogue — as long as colonial powers are not allowed to politicize history with their attempts to discipline our country through so-called Armenian genocide allegations," he said on Twitter.

Reiterating that there was no international political or academic consensus or legal decision on the events of 1915, Altun said some third countries were shadowing efforts to reveal the truth by taking non-binding decisions based on their one-sided dispositions, and ignoring Turkey's initiatives to reach a solution.

Turkey's position on the events of 1915 is that the deaths of Armenians in eastern Anatolia took place when some sided with invading Russians and revolted against Ottoman forces. A subsequent relocation of Armenians resulted in numerous casualties, added by massacres from militaries and militia groups of both sides.

The Turkish Historical Society has also made a documentary movie based on true documents and interviews to inform the public about the 1915 events. The document is available at the website of the society in five different languages, including Turkish, English, German, French and Spanish.

"The documentary explains the propaganda that the Armenian diaspora makes through forgery and damaged documents in detail. I believe it is an important, convincing and informing work," the head of the society, Refik Turan, said.