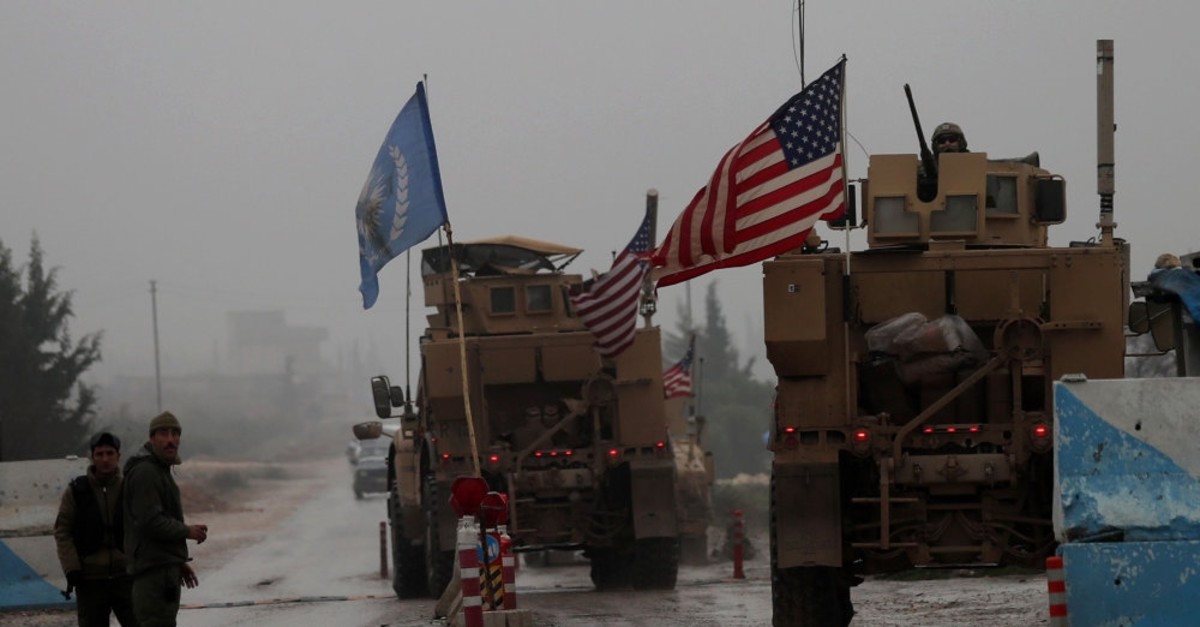 U.S. military vehicles drive through a checkpoint in Manbij as they head to their base on the outskirts of the northern Syrian province, Dec. 30, 2018.
by Daily Sabah with Agencies Apr 25, 2019 12:10 am

The U.S. is alone in its Syrian policy to keep the YPG terrorists as its closest partner in the region as the country's allies refuse to support it

The administration of U.S. President Donald Trump has failed to attract the support of many allies for its Syrian policy, according to a report by The Wall Street Journal (WSJ).

The policy aims to prevent the resurgence of Daesh by prioritizing support for the PKK's Syrian affiliate the People's Protection Units (YPG), a group that seeks autonomy in the northern and eastern parts of Syria.

Citing U.S. and foreign officials, the WSJ reported on Tuesday that "the Trump administration has asked at least 21 of its allies to provide troops and other logistical support in Syria to prevent a Daesh resurgence, but nearly half so far have declined and others have agreed to provide only nominal support including humanitarian assistance and stabilization assistance."

The newspaper stated that Washington held two rounds of meetings to present its plan with the hope that allies would contribute in January and in spring, adding that the U.S. asked its allies in the meetings to provide general support in areas where the U.S. falls short, including air logistics, training and financial support for stabilization efforts, yet, it did not request specific skills or a fixed number of troops.

In relation to the issue, Col. Patrick Ryder, a spokesman for U.S. Central Command (CENTCOM), told the WSJ that they continue to consult with multiple partners and allies to identify areas where they might best contribute to the enduring defeat of Daesh and remain confident that coalition nations will provide the necessary support in Syria.

The U.S. has been a party to the combat in Syria since 2014 with the initial aim of supporting the opposition with non-lethal aid against the Syrian regime along with France, the U.K. and Canada. Within this context, the country initiated the "train-and-equip" program. However, Washington's support swiftly changed into armed support for the YPG by the Obama administration under the pretext of fighting Daesh. Ankara has objected to the decision since, saying that partnering with one terrorist group to fight another is illogical and opens opportunities for new terrorist organizations to flourish in the country.

France, Saudi Arabia and the United Arab Emirates (UAE) come to the fore with their steadfast support for U.S. policy in Syria. French presidents have been holding regular public meetings with the YPG and expressing their continued support since 2015, while the French press portrays the terrorists as freedom fighters and glorifies their achievements. On the other hand, Saudi Arabia and the UAE publicly provided more than $1 billion since 2015 to the terrorist groups as a part of a "stabilization project." Reportedly, Saudi Arabian officials also met in May 2018 with top PKK figures to form a coalition with Arab forces.

In relation to the pullout process of Washington, the WSJ underlined that allies of the U.S. have been critical of the abrupt withdrawal process while hurdles in assembling an allied force in Syria have complicated U.S. planning and troop withdrawal efforts in the period following the capture last month of the last Daesh-held territory in Syria. Trump's swift decision sparked the resignation of his former Defense Secretary James Mattis and has raised a range of criticisms. Trump's sudden decision prompted divergent voices and criticism suggesting that Daesh continues to pose a threat and it would be a betrayal to the U.S.' ally on the ground, the YPG, which Turkey sees as a national threat.

Commenting on the post-withdrawal negotiations between Ankara and Washington, Minister of Defense Hulusi Akar said on Tuesday that they are still continuing talks and are trying to show the U.S. of Ankara's concerns on the YPG.

"Our intention and objective is to ensure the security of our borders and country and eliminate all the terrorist threat against our people and country," he added.

Stressing that they have been receiving positive messages from the U.S., Akar emphasized that territories liberated by the previous two cross-border operations of Turkey enabled thousands of Syrian refugees to return to their hometowns and they are trying to show this.

Turkey's top concerns are whether the U.S., during its withdrawal, take back the weapons and ammunition it gave to the YPG as it has pledged to do so - and whether the planned 32-kilometer deep safe zone in northern Syria along the Turkish-Syrian border will be free of the YPG. Turkey says the weapons are ultimately transferred to the PKK and the safe zone free of the terrorist organization is a necessity in establishing border security.

Turkey sees no difference between the PKK, a group also listed on the U.S. and EU terror lists that has claimed the lives of more than 40,000 people in a more than 30-year terror campaign, and the YPG in Syria, as the two groups are organically linked and have fluid movement of members between their lines. Numerous human rights organizations have also documented YPG human rights violations, including torture, recruiting child soldiers and the deliberate disruption of education and health services.