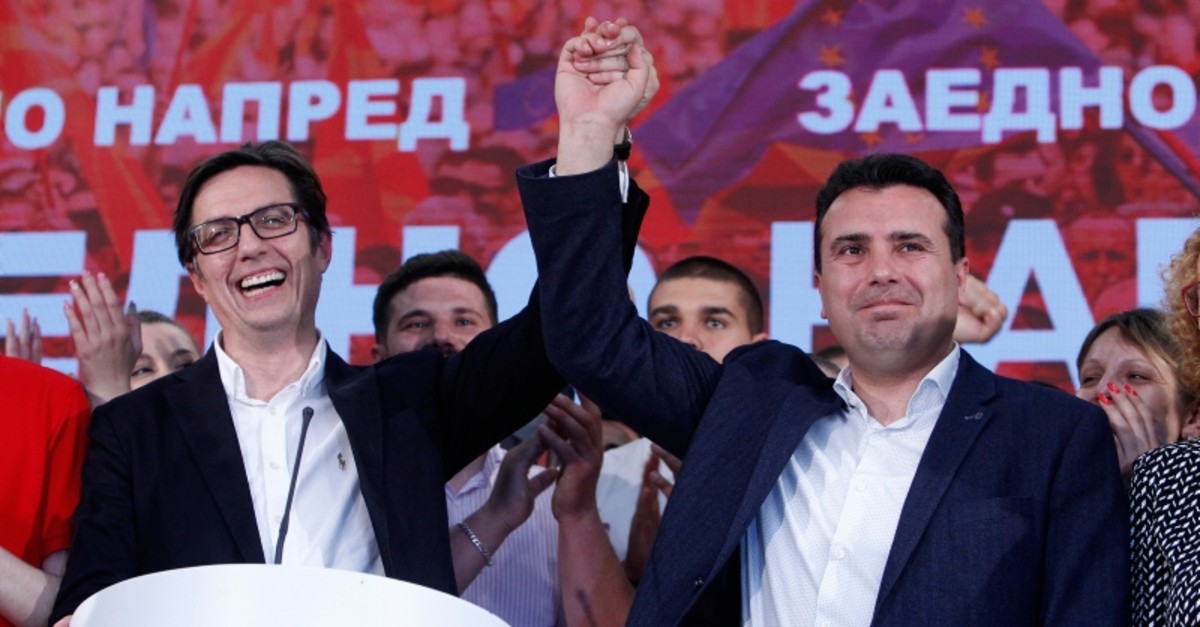 Stevo Pendarovski, left, candidate of the ruling coalition led by the Social-democrats, celebrates his victory in presidential election with Prime Minister Zoran Zaev, right, in Skopje, North Macedonia, Sunday, May 5, 2019. (AP Photo)
by Compiled from Wire Services May 06, 2019 12:11 pm

Turkish Foreign Ministry welcomed the "successful" completion of the second round of presidential elections held in North Macedonia on Sunday.

"We welcome that the second round of Presidential elections held in North Macedonia on 5 May was completed successfully," the ministry said in a statement late Sunday.

"We believe that the result of the Presidential elections will consolidate peace and stability in the country," it added.

The statement also said that Turkey will continue to work to further improve bilateral relations with North Macedonia in every area and to cooperate with regional countries to strengthen stability and prosperity in the Balkans.

Stevo Pendarovski, the candidate of the governing Social Democrats, has declared victory in Sunday's presidential runoff in North Macedonia, gaining 51.75% of the votes.

His rival Gordana Siljanovska-Davkova, a law professor backed by the right-wing opposition, was around 60,000 votes behind with 44.65%.

"I will be a president for all of the citizens, no matter who they voted for," Pendarovski told supporters on Sunday night as results rolled in.

Sunday's election is the sixth presidential election in the country's modern history, but the first since it made a momentous name change.

A political science professor who is coordinating the country's efforts to join NATO, Pendarovski has been championing the government's name deal with Greece.

The accord, which was finalized this year and added "North" to Macedonia, ended a decadesold identity dispute with Athens that was blocking Skopje's EU and NATO ambitions.

But he said it should also give the government a push to "finally take seriously their own promises" on reforms, such as cleaning-up the bureaucracy and cracking down on corruption.