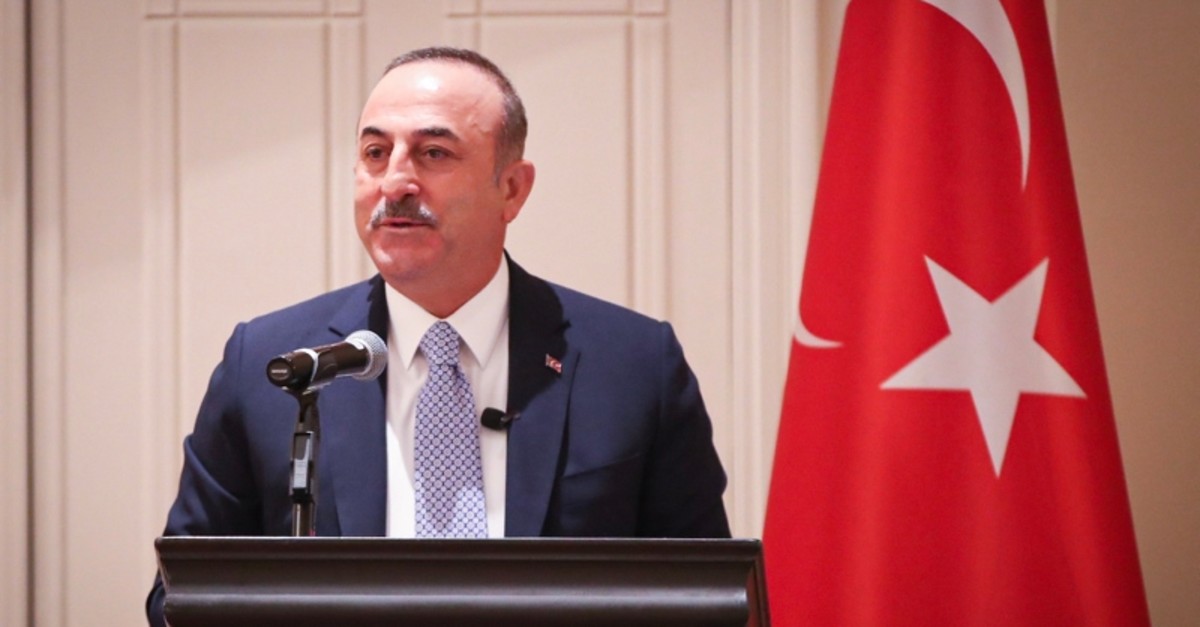 Speaking on Turkey's position on the Venezuelan crisis in a panel in the Mexican capital, Çavuşoğlu said: "We are against foreign intervention, resorting to undemocratic means, including coup attempts and imposing unilateral sanctions to replace legitimate governments."

The panel was held in Mexico City by COMEXI think tank where the top Turkish diplomat met with his Mexican counterpart Marcelo Ebrard and Senate President Marti Batres Guadarrama.

Highlighting the importance of sovereignty and non-intervention in internal affairs, he said: "We are concerned over attempts to undermine the constitutional order and sovereignty of Venezuela.

"These attempts not only threaten stability, peace and security of Venezuela but also create a dangerous precedent and put the whole region in danger," he added.

A disaster in Venezuela would have "extremely grave" consequences for the whole region, he noted.

Venezuela has been rocked by protests since January, when President Nicolas Maduro was sworn in for a second term following a vote boycotted by the opposition.

Russia, Turkey, China, Iran, Bolivia and Mexico have thrown their weight behind Maduro.

Terrorism as a global threat

Describing terrorism as a global threat and an enemy of humanity, Çavuşoğlu said: "Turkey has always underlined that we can defeat terrorism only by international cooperation and with a sincere and comprehensive approach."

Terrorism is still a crime against humanity regardless of being committed by whomever and for whatever reason, he noted.

"Therefore, there can be no distinction between good versus bad terrorists," he said, adding the presence of Daesh, PKK, People's Protection Units (YPG) and Gülenist Terror Group (FETÖ) and all others is a serious risk for peace and stability everywhere.

He went on to say: "Turkey has been the only country in the counter-Daesh Coalition which put its troops in harm's way through direct confrontation with Daesh terrorists."

The YPG is the military wing of the Democratic Union Party (PYD), which is the Syrian affiliate of the terrorist PKK organization.

Speaking on Turkey's role in humanitarian diplomacy, he stressed that according to the ratio of official humanitarian assistance to national income, Turkey is the most generous donor.

"Turkey is the largest host country with 4.2 million people taking refuge," he said.

Underlining the importance of developing ties with all regions in the world, he said: "Turkish diplomatic outreach, which is the fifth largest diplomatic network in the world, has grown immensely, currently totaling 242 missions."

Çavuşoğlu met Ebrard in a working meeting later Monday where they confirmed the political dialogue between the two countries is at an "excellent level," the Turkish Foreign Ministry said in a statement.

Bilateral relations between Turkey and Mexico exceed 90 years, the ministers stressed, reiterating the nations are part of a strategic cooperation and partnership framework.

With the signing of the "Strategic Cooperation and Partnership Framework for the 21st Century" on Dec. 17, 2013, Turkey and Mexico inaugurated a new era in its bilateral relations by upgrading the relationship to the level of a strategic partnership.

The top diplomats also emphasized the importance of maintaining a constructive, close and active dialogue to strengthen and develop their agenda.

The ministers agreed to encourage competent government agencies and business sectors to intensify efforts to increase and diversify trade and investment flows for strengthening economic relations between the countries.

Çavuşoğlu said Ankara and Mexico City had strong cooperation at the U.N., G20, Organization for Economic Co-operation and Development (OECD) and MIKTA (Mexico, Indonesia, Republic of Korea, Turkey and Australia) and the trade volume reached $1.2 billion with a five-fold increase in the past 15 years.

He stated relations between the two would further strengthen with Turkish Airlines' direct flights to begin in August and high-level visits.

It would contribute to relations in tourism, trade and investment, the ministers said.

Diplomatic relations between Turkey and Mexico were established by the Friendship Agreement, which was signed in Rome on May 25, 1927, and implemented July 12, 1928, according to Turkish Foreign Ministry.