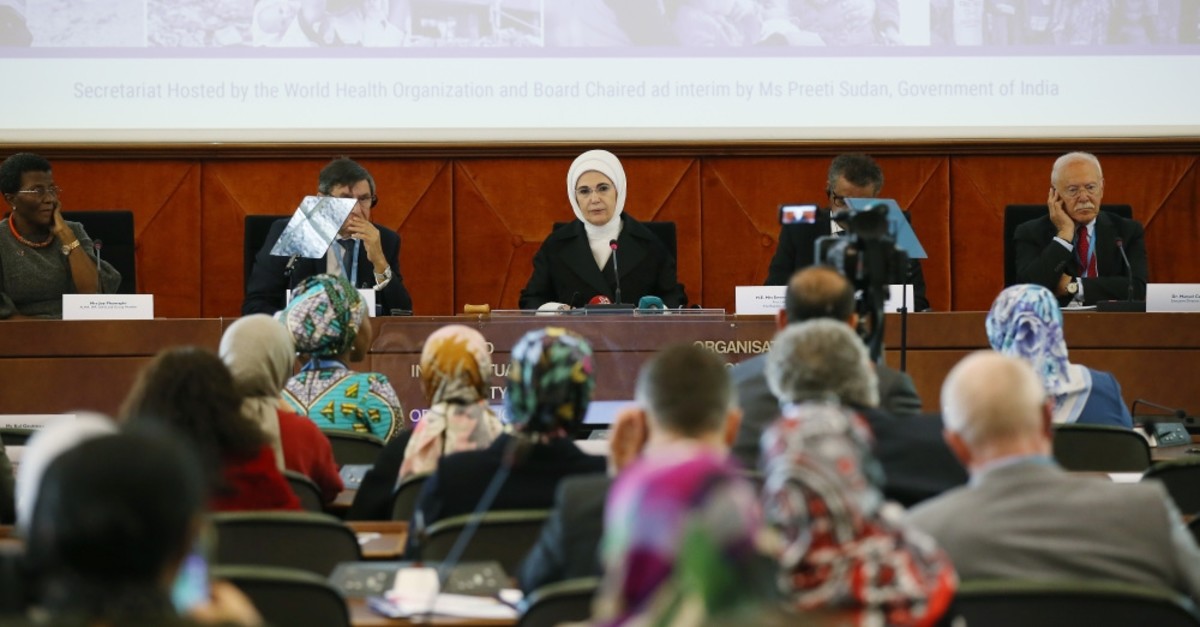 Educating local personnel and transferring medical experience to provide sustainable health services to those in need are the most important pillars of Turkey's worldwide health campaign, first lady Emine Erdoğan emphasized yesterday. "We believe in the importance of teaching how to catch a fish. Therefore, passing on the experience of our doctors is vital for us. We are giving education to hundreds of health personnel from countries of different regions, including the Balkans, Middle East and Africa," Erdoğan said at a high-level meeting of the World Health Organization (WHO) in Geneva. Stressing that Turkish nongovernmental organizations (NGOs) take on significant roles in carrying out worldwide health campaigns, Erdoğan said Turkey has demonstrated its willingness to help out by combining its knowledge and experience with the WHO's synergy to relieve people in need. Especially in last 15 years, Turkey has reached out to the far corners of the globe with many health projects.

Apart from building modern hospitals in numerous countries to provide access to health services for hundreds of thousands, the country has been providing vocational training to local medical staff and sending doctors to conflict and disaster zones and to impoverished communities to carry out urgent medical operations. As part of 43 Health Weeks organized in 20 countries on three continents to perform medical operations for people who cannot afford treatment for different reasons, 4,000 surgeries were carried out and vocational education was given to 5,000 foreign medical personnel. Turkey also signed 153 agreements in the medical sectors of 78 countries.

"Also, through bilateral agreements, 10,000 foreign patients from 46 different countries have been treated free of charge in our country, and one-third of these patients are women and children," the first lady said.

The Turkish Cooperation and Development Agency (TİKA) played a pivotal role in Ankara's efforts to reach different regions. The agency opened a 200-bed training and research hospital in Somalia's Mogadishu in 2015 and built one of the region's most well-equipped hospitals in Sudan's Nyala in 2014. Also, a field hospital in Bangladesh's Cox's Bazar has been providing medical services to thousands of Rohingya refugees who fled Myanmar since it was first established in 2018 by Turkey's Disaster and Emergency Management Authority (AFAD) with the contributions from the Health Ministry.

Erdoğan said along with hospitals in these three countries, new hospitals will be opened in Gaza, Kyrgyzstan and Libya. "Also, the already constructed maternal and child hospital in Niger will start to treat patients soon," she said.

In the Western African country of Niger, one of the poorest countries in the world where insufficient resources hinder quality healthcare, TİKA built a maternal health and rehabilitation center. The center primarily offers health services for thousands of women who gave birth in unhealthy environments and at young ages.

Indicating that Turkey is willing to take responsibility for humanitarian missions in a fragile region, Erdoğan said the country is now sheltering more than 4 million refugees, mostly Syrians, and has accumulated substantial experience in finding solutions for humanitarian crises.

Turkey has 180 health centers for refugees in the country, mostly in provinces where they predominantly live. While 410,000 Syrian children were born in the last eight years, 1.5 million Syrians received medical services and 1 million of them had surgeries.

"In Turkey, all refugees are benefiting from health services free of charge, which is, I think, an unprecedented practice in the world," she said.

With over $35 billion spent for the well-being of Syrian refugees, Turkey tops the list of countries restoring the health of refugees worldwide with the cost of health services surpassing $10 billion, according to the WHO in 2018. Along with free access to services provided by public hospitals, refugees also benefit from clinics set up specifically for them. The Health Ministry occasionally conducts vaccination campaigns as well with charities offering free medical checkups, especially for those living outside the camps. Turkey has also joined forces with the WHO to train hundreds of Syrian doctors and nurses to overcome the language barrier for refugees who need to access health services and to boost health literacy and awareness for diseases for refugees.

Erdoğan also pointed out the significant amount of money spent for refugees, which makes Turkey the most generous country in the world. According to the Development Initiative's (DI) Global Humanitarian Assistance Report in 2018, Turkey was the most charitable nation in 2017 with nearly $8.1 billion spent on humanitarian aid. The country's humanitarian aid expenditures were nearly 1 percent of its gross domestic product (GDP) in 2017, which gave it the leading position in the world.

Erdoğan said Turkey has embraced a "people first" approach in its recent health strategy, adding that all organizational structures and resource management were restructured to guarantee people's right to benefit health services.

"We gave importance to efficiency, accessibility, sustainability and quality to improve patient satisfaction. I can gladly express that Turkey has a success story on global health comprehensiveness," he said.

In recent years, Turkey has taken steps to rejuvenate the once crumbling healthcare system. Hospitals run by the Health Ministry and Social Security Fund (SGK), formerly known as the Social Insurance Fund, were merged to prevent overcrowding in the latter. The government also cut red tape in the treatment of patients with social security at teaching hospitals.

These large hospital complexes provide services in a diverse range of medical specialties not available in the other hospitals in many cities. To ensure the quality of services, the government has adopted a public-private partnership model for the construction and operation of the complexes. The city hospitals are being leased to private companies and the government only pays fees for medical imaging, laboratories, security, maintenance and health care workers' salaries.