Georgian Ambassador to Ankara: Turkey is closest friend and strategic partner of Georgia 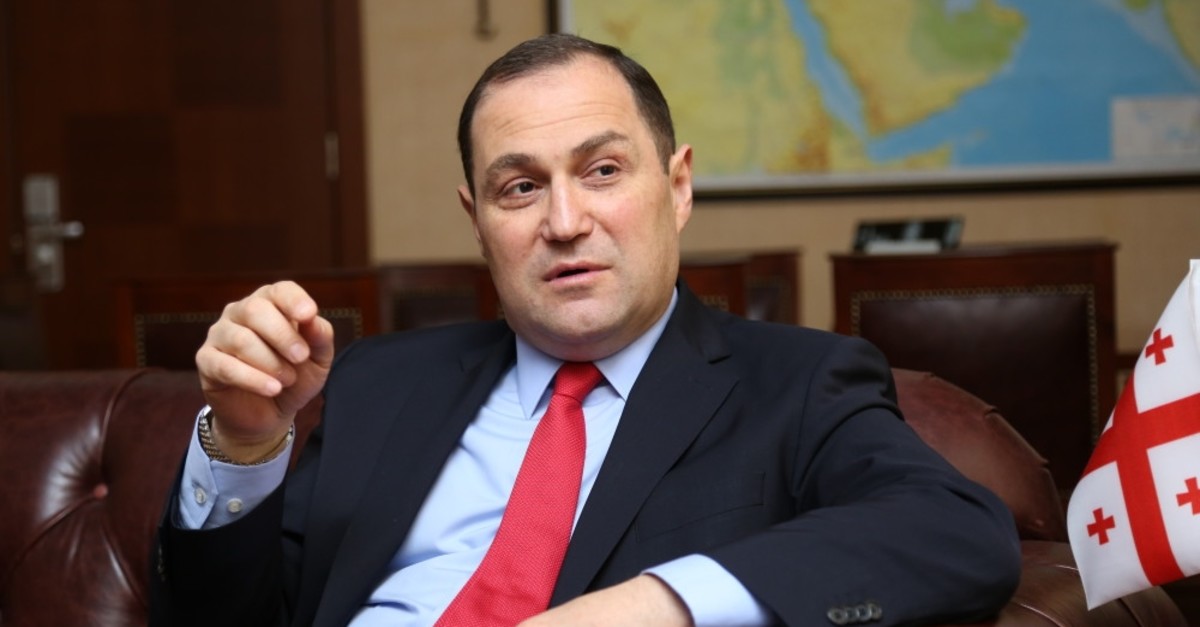 Turkey and Georgia have excellent bilateral and multilateral cooperation, said Georgian Envoy to Turkey, George Janjgava.
by Mustafa Kırıkçıoğlu
May 25, 2019 12:31 am

Excellent cooperation between Turkey and Georgia provides an opportunity to deepen bilateral political and economic relations, according to Georgia's envoy

"We have excellent cooperation both in bilateral and multilateral formats," the envoy said.

"The establishment of the Georgia-Turkey High-Level Strategic Cooperation Council in 2016 has provided us with an opportunity to deepen high-level dialogue and to take up issues of bilateral agenda at the higher level," he added.

Stressing that the two countries always give strong support to each other in crucial moments, the Georgian envoy said Tbilisi firmly backed the democratically elected Turkish government during the July 15, 2016 coup attempt, and also highlighted that the prime minister of Georgia was the first foreign leader to visit Turkey after the vicious attempt.

"Also, Turkey was one of the first countries to recognize Georgia's independence and actively supports our territorial integrity and sovereignty as unfortunately 20% of our territories are occupied by the Russian Federation. Ankara is also a vocal supporter to Georgia's Euro-Atlantic integration process," he said.

Noting that Turkey is the number one trade partner of Georgia with more than $1.7 billion trade volume in 2018, Janjgava highlighted bilateral deals including the Free Trade Agreement and Joint Economic Trade Committee (JETCO) and the increasing number of joint projects in the energy field.

"It is crucial to underline that the Turkish-Georgian cooperation brings oil and gas resources from the east to the west and projects such as the Baku-Tbilisi-Ceyhan oil pipeline, Baku-Tbilisi-Erzurum natural gas pipeline and Trans-Anatolian (TANAP) Natural gas pipeline are proof of strong strategic friendship between the two countries. On the other hand dozens of Turkish-Georgian joint hydroelectricity projects now are ongoing in Georgia and promise to bring additional diversified electricity for both countries in the near future," the Georgian envoy said.

The Baku-Tbilisi-Erzurum pipeline started delivering gas to the Turkish network in July 2007. The pipeline delivers 6.6 billion cubic meters of gas to Turkey per year and will be out of operation by 2021, as it will be fully replaced by the TANAP. Another project following a similar route, the 1,076-kilometer Baku-Tbilisi-Ceyhan (BTC) pipeline, started delivering Caspian oil to Turkey and global markets in 2006.

Janjgava said Anaklia Port, which is being built in western Georgia, will create a world-class port complex for Georgia and establish Anaklia as a focal point of trade to and from Central Asia and the new Silk Road trade route, stretching from China to Europe. "Georgia hopes that many international and Turkish corporations will exhibit interest in the deep sea port in Anaklia which will serve as a regional hub for millions of tons of cargo transportation from east to the west and vice versa," he said.

Emphasizing intense tourist traffic both ways thanks to an agreement enabling Turkish and Georgian citizens to travel to both countries with their personal ID cards, Janjgava said that the renovation of the Sarpi border and increased number of direct flights will further boost tourism and trade between the two countries.

"There are a total seven direct flights from Istanbul to Tbilisi, including five daily flights. With the efforts of President Recep Tayyip Erdoğan, starting from Jan. 18, 2019, there are direct flights from Ankara to Tbilisi twice a week. In 2018, more than 1 million Turkish citizens visited Georgia, while more than 2 million Georgian citizens visited Turkey, and the number is gradually growing," he said.

The Georgian envoy added that the Baku-Tbilisi-Kars Railway will become Central Asia's gateway to Europe in the near future. "The line is already a major regional segment to the Eurasian network of rail and shipping routes that move goods between China and Europe, diminishing transportation times from anywhere between 25 to 30 days down to 15 days. Cargo capacity along the route is estimated to be about 17 million tons per year, while the initial passenger capacity may be 1 million people," he said.

The Baku-Tbilisi-Kars railroad project connects not just Turkey, Georgia and Azerbaijan, but also Europe to Central Asia and China. The 829-kilometer railway line, extending from Baku to Kars, complements a major part of the Middle Corridor with the Caspian Pass line.

Janjgava also touched upon trilateral cooperation between Azerbaijan-Georgia-Turkey, which was initiated by the Trabzon Declaration on June 8, 2012, at the level of Foreign Affairs ministers, saying that the meetings held within this framework provides fertile ground for discussions on the consolidations of regional stability and security.

"Adding another dimension to the trilateral format, a decision was taken to broaden this mechanism and at this stage, it covers the cooperation between the presidents of the three countries, ministers of Economy, Defense and Finance and chief of General Staffs," he said.

Speaking on Georgia's integration process to NATO, Janjgava thanked Ankara for its firm support of Tbilisi's NATO aspirations, emphasizing that the accession into the alliance is a top foreign policy priority of Georgia, which is enshrined in the country's constitution and supported by "an overwhelming majority" of Georgians.

At a 2008 summit in Romania, NATO leaders said Georgia would join the bloc at an unspecified future date. Since then, the country has been using integration mechanisms including the NATO-Georgia Commission (NGC), the Annual National Programme (ANP) and the Substantial NATO-Georgia Package (SNGP). With the SNGP, they aim to improve Georgia's defense capabilities, increasing its resilience, enhancing interoperability with NATO and supporting NATO's membership preparation process.

"We do understand that NATO membership is a long-term process. We, from our side, spare no effort to enhance our defense capabilities and resilience, in order to increase our interoperability with NATO. We continue our comprehensive reform agenda and will do our best to ensure, that whenever the political decision on Georgia's NATO membership is matured, my country is completely ready to join the alliance," the Georgian envoy said. He added that Georgia plays an important role in NATO's efforts to strengthen Black Sea security through contribution to strategic dialogues with the alliance and the implementation of practical initiatives.

Janjgava also marked the Independence Day of Georgia, which was observed on May 26th and celebrated it with various events across the country, as the day is of the "highest significance in the country's history."

"On April 9, 1991, Georgia managed to free itself from the totalitarian system and claim back its independence, in the aftermath of the tragedy and national rally that took place on April 9, 1989. Despite all the hardships that Georgia has undergone, the Georgian people always striven for independence and never lost the feeling of inner freedom," he said.