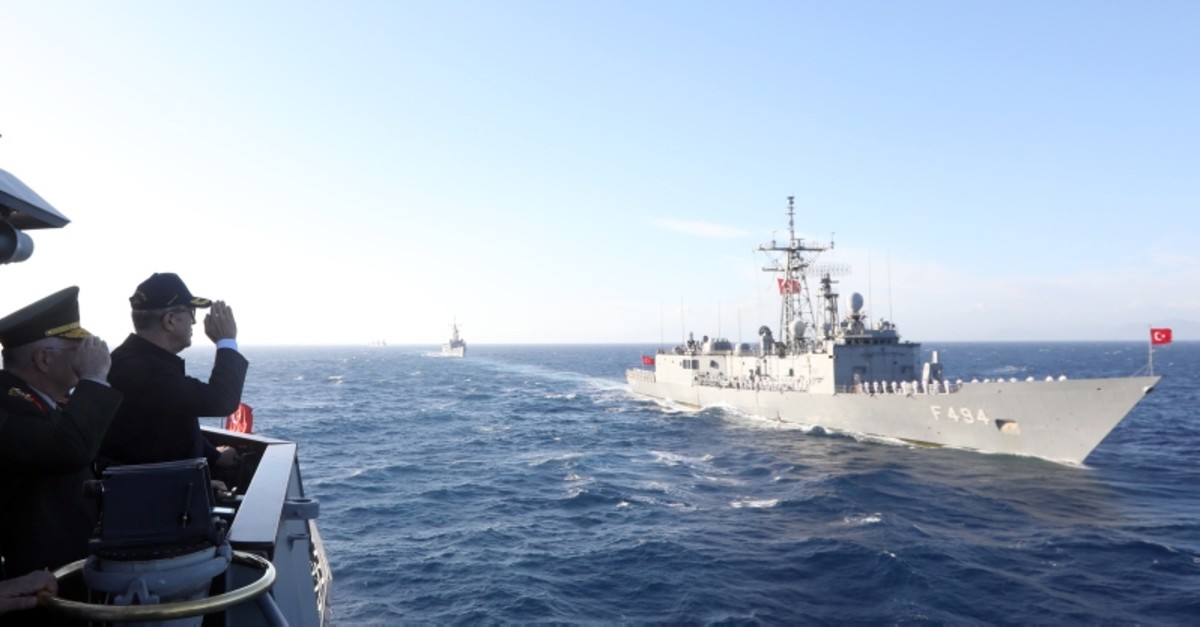 Turkey expects not to face provocative acts and irresponsible statements on Aegean and the Eastern Mediterranean, the country's defense minister said on Saturday.

"It is our sincere expectation that provocative acts and irresponsible statements, which do not help resolve problems in the Aegean and Eastern Mediterranean – are not allowed," Hulusi Akar said during an event as part of Turkey's largest military exercise Sea Wolf (Denizkurdu) 2019.

"Our desire and expectation are that the rights and interests of Turkey -- which has the longest coastline in the Eastern Mediterranean -- and the Turkish Republic of Northern Cyprus to be respected. We expect from all the sides to respect these subjects. This is our most natural right," Akar said.

"Turkey, in every occasion, voices that it sides with resolution of the problems in Aegean, Eastern Mediterranean and Cyprus within the framework of good neighborly relations and international law and it exerts efforts in this direction," Akar added. He noted that Turkey will continue its hydrocarbon drilling efforts in its own continental shelf and exclusive economic zone (EEZ), in addition to areas licensed by the Turkish Republic of Northern Cyprus(TRNC).

Turkey does not acknowledge the maritime delimitation agreements of the Greek Cypriot administration inked with regional countries. The Greek Cypriot administration, which signed the so-called EEZ delimitation agreements with Egypt in 2003, Lebanon in 2007 and with Israel in 2010, has also unilaterally declared 13 exploration sites.

Objecting to these steps by the Greek Cypriot administration from the beginning, Turkey and the Turkish Republic of Northern Cyprus (TRNC) argued that, on the issue of sovereignty, the Greek Cypriot side couldn't sign unilateral limiting agreements by disregarding the rights and solution parameters of Turkish Cypriots.

Turkish lawmakers from the Foreign Ministry also claimed that islands do not generate full maritime jurisdiction areas.
In 1974, following a coup aiming at Cyprus' annexation by Greece, Ankara intervened as a guarantor power. In 1983, the Turkish Republic of Northern Cyprus was founded.

The decades since have seen several attempts to resolve the dispute, all ending in failure. The latest one, held with the participation of the guarantor countries – Turkey, Greece, and the U.K. – ended in 2017 in Switzerland.

In regards to recent talks with Greece, he said, "Inter-delegation talks have completed in Athens in the direction of the agreement we made with Greek Defense Minister Evangelos Apostolakis."
"I believe these talks will continue in the future period and think that they will be for the benefit of both countries," Akar said.

A Turkish defense delegation went to Athens for a technical meeting with Greek officials to enhance cooperation especially in confidence-building measures and code of conduct in the Aegean Sea between May 20 and May 25.

According to reports in Greek Cypriot media, administration Defense Minister Savvas Angelides and French counterpart Florence Parly signed a memorandum of understanding on May 15 to allow the French Navy to use a naval station at Mari to permanently service its warships to reinforce the military capabilities of the Greek Cypriot administration.

The French and Greek Cypriot administrations have been reported to co-fund the building of a new docking area at Evangelos Florakis naval base in Mari to allow larger warships to dock.

Angelides and Parly were also reported to discuss Turkey's activities in the Eastern Mediterranean and the French minister voices her country's support for the Greek Cypriot administration against Turkey.

Moreover, the Athens-based Ekathimerini daily also reported on May 10 that the Greek Cypriot administration allocated French oil company Total and Italian firm ENI the exploration license for Block 7 in the putative and unilaterally declared exclusive economic zone of the Greek Cypriot administration. The French and Italian partnership can be extended to other Blocks of the Cyprus EEZ, the report added.