Peace deal without Palestinian state bound to be rejected by OIC: FM Çavuşoğlu 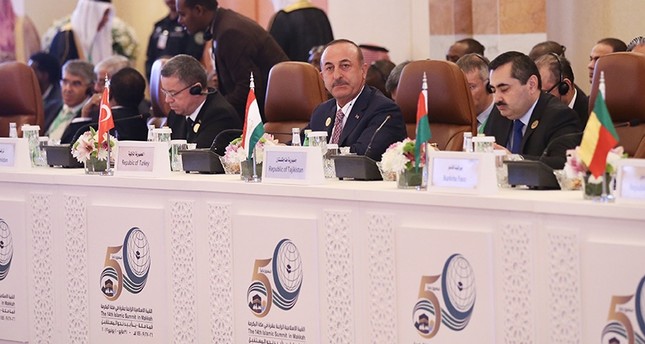 Any peace deal which does not envisage the creation of an independent Palestinian state is bound to be rejected, Foreign Minister Mevlüt Çavuşoğlu said Wednesday.

"Throughout our chairmanship, we spared no efforts to defend the rights of the Palestinians as our common cause," Çavuşoğlu told an Organization of Islamic Cooperation (OIC) meeting in Jeddah province, Saudi Arabia.

Çavuşoğlu said it is "more important than ever" to unite forces and efforts of OIC countries for the establishment of an independent, sovereign and contiguous Palestine. "This is a responsibility that falls first and foremost on our shoulders."

He stressed that all member nations need to renew their commitment to the preservation of the status of Jerusalem and emphasized it will remain a red line.

"I am therefore confident that any peace deal which does not envisage the creation of an independent Palestinian state with Al-Quds Al-Sharif as its capital is bound to be rejected by the OIC community," Çavuşoğlu said.

On Syria, he said Turkey assumes a leading role in international efforts to reach a sustainable political solution.

"Our work within the Astana platform continues to de-escalate tension on the ground and facilitates the political process.

"The Idlib Memorandum prevented not only a humanitarian disaster and massive refugee flow toward Turkey, but also the collapse of political process," Çavuşoğlu said.

Turkey and Russia agreed in September to turn Idlib into a de-escalation zone in which acts of aggression would be expressly prohibited.

The Syrian regime, however, has consistently broken the terms of the cease-fire, launching frequent attacks inside the de-escalation zone.

Turning to Libya, Çavuşoğlu emphasized there is no alternative to a political solution to the war-ravaged nation.

In early April, Gen. Khalifa Haftar launched a campaign to capture Tripoli from Libya's U.N.-recognized Government of National Accord (GNA).

Libya has remained beset by turmoil since long-serving leader Muammar Gadhafi was ousted and killed in a bloody NATO-backed uprising in 2011.

Since then, the country has seen the emergence of two rival seats of power: one in eastern Libya, to which Haftar is affiliated, and the other, the GNA, in Tripoli.

On Kashmir, Çavuşoğlu said the conflict should be resolved through dialogue between India and Pakistan.

Jammu and Kashmir, a Muslim-majority Himalayan region, is held by India and Pakistan in parts and claimed by both in full. A small sliver of Kashmir is also held by China.

Indian and Pakistani troops have also fought intermittently since 1984 in the Siachen Glacier in northern Kashmir. A cease-fire came into effect in 2003.

Çavuşoğlu also said Turkey worked hard to tackle other major challenges that Muslims are facing around the world during its chairmanship of the OIC.

"However, we are still at a beginning stage of a long fight against Islamophobia and the toxic ideologies behind it," he added.

Following the meeting, Turkey handed over the OIC Summit Chairmanship to Saudi Arabia.

Share on Facebook Share on Twitter
Previous in Diplomacy U.S. port operations in Greece are a part of regular conduct with... Next in Diplomacy Turkey is in close talks with Russia over the latest developments...
DAILY SABAH RECOMMENDS