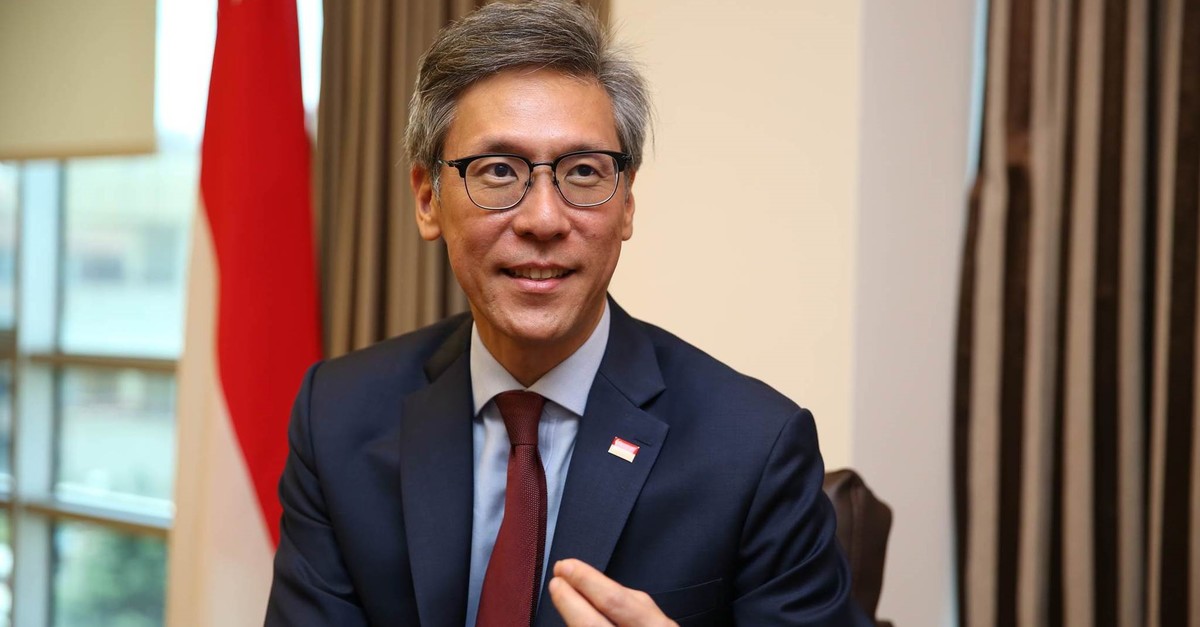 According to Singaporean Envoy to Ankara Jonathan Tow, in spite of the geographical distance, early historical ties contribute to the richness of the two countriesu2019 bilateral relations.
by Mustafa Kırıkçıoğlu
Jun 03, 2019 12:04 am

Celebrating the 50th year of diplomatic relations, Turkey and Singapore enjoy excellent bilateral ties that are based on the two main pillars of the Joint Declaration on a Strategic Partnership signed in 2014 and the Turkey-Singapore Free Trade Agreement that entered into force in 2017

The historical friendship between Turkey and Singapore has been boosted with a strategic partnership and free trade agreements as well as recent high-level visits, Singaporean Ambassador to Ankara Jonathan Tow said. "The excellent bilateral relations were founded on two important pillars: the Joint Declaration on a Strategic Partnership signed in 2014, and a modern and comprehensive Turkey-Singapore Free Trade Agreement (TRSFTA), which entered into force in 2017," Tow told Daily Sabah in an exclusive interview.

He stated "it is also notable that Prime Minister Lee Hsien Loong and President Recep Tayyip Erdoğan have met regularly, leading to the speedy conclusion of these important agreements."

Turkey and Singapore celebrated the 50th anniversary of diplomatic relations in February 2019. The official interactions between the two countries can be traced back a hundred years before Singapore's independence, to 1865, when the Ottoman Empire established the first Turkish Honorary Consulate in colonial-era Singapore. 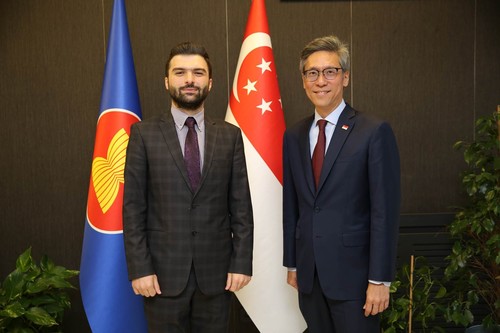 "In spite of the geographical distance, I believe that these early links contributed to the historical richness of our ties," Tow said.

As part of the 50th anniversary celebrations, Singapore's Speaker of Parliament Tan Chuan-Jin will visit Ankara, Istanbul and İzmir from June 23 to June 28. During his visit, he will meet with his counterpart in the Turkish Parliament and mark the occasion by launching a Turkey-Singapore food dish in Istanbul, and an archival exhibition in Ankara that traces key milestones of the past 50 years. The visit is expected to be followed by Singapore's Senior Minister Tharman Shanmugaratnam in July 2019. The senior minister is ranked below the prime minister but above the deputy prime minister.

"These two high-level visits, coupled with the recent visit by Minister Iswaran in April, demonstrate our desire to maintain a warm friendship with Turkey. In turn, we have invited President Erdoǧan to visit Singapore this year to mark this special milestone in the bilateral relationship. We look forward to a favorable response and welcoming him," the Singaporean envoy said.

Tow said that there are many concrete examples of Singaporean companies that invested a significant amount of money in various areas, adding that these firms in Turkey remain confident of the economy and its prospects.

"They also add value by bringing their global networks that support and complement the Turkish market," he said.

An example of a Singaporean company currently operating in Turkey, PSA International manages one of Turkey's largest ports, Mersin International Port, which handles 1.7 million 20-foot equivalent units, and has reportedly invested $1 billion in the venture over the years.

Olam International, a global agricultural and food business that owns the Progıda brand, is Turkey's second largest producer of hazelnuts with factories in northern Samsun, Giresun and Ordu provinces. DP Architects designed the redevelopment plans for the historic Haliç Shipyard in Istanbul, which was launched in February by Erdoǧan. Ascott Holdings, a global hospitality brand, manages service apartments in Istanbul and is expanding its footprint in Turkey. Singaporean Sovereign Wealth Funds Temasek Holdings and GIC Pte Ltd have also invested in various Turkish companies, such as Doǧuş Group and Rönesans Gayrimenkul Yatırım.

Stressing that Turkey and Singapore are strategic transportation and logistics hubs with extensive linkages to their respective regions, Tow said the TRSFTA will prove valuable to Turkish and Singapore companies seeking to get access to a wider market.

In 2018, bilateral trade was valued at about $1.1 billion, with a trade surplus in favor of Turkey.

Tow noted that two countries have a progressive and modern FTA that covers goods and services, intellectual property rights, public procurement and e-commerce, adding that both governments need to work actively with key business chambers in Singapore and Turkey to familiarize companies to the TRSFTA opportunities.

"Just last month, Singapore's Minister-in-charge of Trade Relations S. Iswaran visited Turkey to promote the TRSFTA, and together with his counterpart Trade Minister Ruhsar Pekcan, agreed to proactively step up its promotion. The trade and investment offices from both sides will do so similarly. We can surely improve the trade numbers," he said.

Tow said that Turkey and Singapore should focus on four "connectivity," in bilateral ties, which are digital, aviation, maritime and cultural connectivity.

"In the age of Industry 4.0, Singapore and Turkey could collaborate on innovation, start-ups and fintech. Turkey has strengths in various areas of innovation while Singapore has developed a strong innovation ecosystem with funding networks linked to Asia," he said.

Touching upon aviation connectivity, Tow said Singapore is a major logistics, transportation and aviation hub just like Istanbul, as Singapore's Changi Airport handles over 65 million passengers and serves 100 airlines flying to 400 cities across the world.

"With the new Istanbul airport slated to be one of the biggest in the world, there are synergies for Singapore and Turkey to collaborate in the passenger and cargo sectors. For example, our logistics companies such as SATS Ltd and Turkish Airlines could join hands to link our respective regional networks through Istanbul and Changi airports," the Singaporean envoy said.

Speaking on possible cooperation in maritime activities, Tow said with Mersin International Port connected to Singapore, two countries can help each other grow stronger, not just in their respective regions, but globally.

"Singapore is the world's busiest transshipment port with links to over 600 ports across 120 countries. Moving into the future, MIP could even emerge as the region's largest and most efficient port. Such a development would certainly benefit Turkey," he said.

Emphasizing the importance of cultural connectivity, the Singaporean envoy said a memorandum of understanding between the National Archives of Singapore and the Turkey's Directorate of State Archives was signed in February to kick-start research on our shared histories and ties between Ottoman Turkey and Singapore.

"Knowing more about our past links will add to the colorful fabric our people-to-people ties, and build our friendship," he said.

Emphasizing Singapore's support on Turkey's engagement of Association of Southeast Asian Nations (ASEAN) as a Sectoral Dialogue Partner, Tow said it is encouraging that Turkey is an active contributor to the association and collaborating with its secretariat to promote technical projects such as diplomatic training, and small and medium-sized enterprise (SME) development. "This is an early but important step. Through continued active engagement, Turkey will become more familiar with ASEAN, and vice versa, and be well positioned to tap into a vibrant and growing market of 650 million people in ASEAN," the Singaporean envoy said. In 2017, Turkey became a sectoral dialogue partner for the ASEAN and since then Ankara's engagement with the ASEAN has moved into a more advanced level.