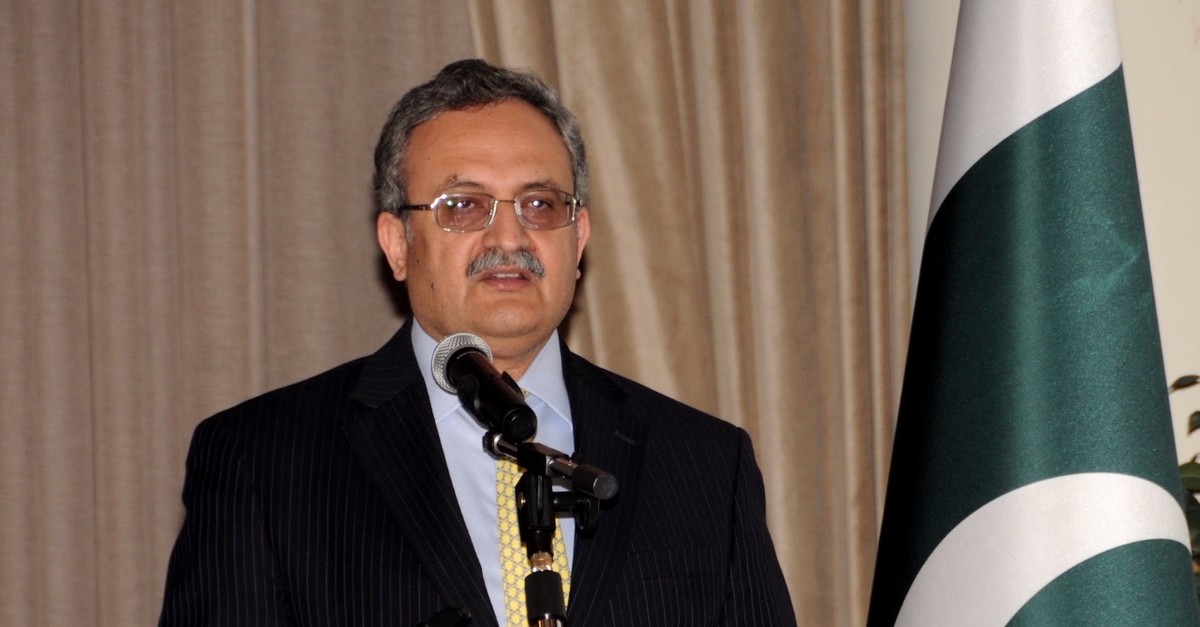 The relationship between Ankara and Islamabad is entrenched at the level of the people, irrespective of any government in power in Ankara or Islamabad, Pakistani Ambassador to Ankara Muhammad Syrus Sajjad Qazi said, highlighting developing military, cultural and economic ties.

"In a remarkable tradition, the peoples of both countries have always stood by each other; be it Kashmir or Cyprus. Both countries have a close similarity of views on regional and international issues and enjoy close collaboration on bilateral, regional, and multilateral forums," Qazi told Daily Sabah in an exclusive interview.

The Pakistani envoy said that Pakistan and Turkey have strong defense industries and capabilities that allow them to benefit from each other's experiences and expertise, highlighting several landmark defense deals inked between the two countries in recent years.

As the cooperation between Islamabad and Ankara has been increasing in the defense industry, Pakistan is set to receive 30 T129 Advanced Attack and Tactical Reconnaissance Helicopters (ATAK) helicopters from Turkey, according to an agreement reached last year. The helicopters will be delivered gradually over five years.

Also, in May 2017, Turkey and Pakistani defense companies had signed a goodwill agreement for the construction of four Turkish Ada class MİLGEM (National Ship) corvettes in the Karachi Shipyard. According to the final agreement, two ships will be built in Istanbul and two others in Karachi. Two of the corvettes will join the inventory of the Pakistan Naval Forces in 2023 and the remaining two in 2024.

Qazi added that the two sides continue to work closely for further collaboration.

"The High Level Military Dialogue Group (HLMDG), having high-level representation from the defense sectors of both countries, meets regularly and chalks out strategies and initiatives for defense collaboration. Our very close cooperation in this vital sector is reflective not only of our mutual appreciation of the security threats faced by the two countries, but also our common desire to contribute to regional and international peace and security," he said.

Speaking on the current situation of the free trade agreement (FTA) talks, which were initiated in 2015, Qazi said seven rounds of talks have been held in this regard. He added that the two sides have expressed their strong political commitment to the early finalization of the FTA at the highest level and continue to work out the technical modalities of the agreement.

"There is much more potential in the area of bilateral trade and commerce than is reflected in the current trade volume between Pakistan and Turkey. The FTA includes trade in goods and services as well as investments," he said.

Qazi also stressed that bilateral trade is below the potential, adding that efforts are underway to increase it. "An encouraging factor in our commercial ties is the growing Turkish investments in Pakistan that have passed the $1 billion mark," he said.

Stressing that enhancing cultural collaboration and people-to-people contacts is among the key priorities of respective governments, the Pakistani envoy said the embassy itself has a vibrant cultural and public diplomacy program.

The Pakistani Embassy organizes the Jinnah Young Writers Awards every year, in which senior high school students from 81 provinces of Turkey participate and submit essays on a selected theme pertaining to Pakistan-Turkey relations. Similarly, for the last seven years, the embassy has been holding Chughtai Art Awards, in which high school students from a chosen province of Turkey make paintings on a given theme. In addition, events such as Pakistan Food and Mango Festivals, photography exhibitions and special cultural nights showcasing Pakistani customs and traditions as well as fashion and music are organized on a regular basis.

Qazi added that one positive indicator in people-to-people exchanges in recent years is the growing number of Pakistani students in Turkey that has exceeded 2,000 this academic year. "We are also making efforts to increase the number of Turkish students going to Pakistan for higher studies," he said.

Touching upon the five-episode documentary "Amazing Pakistan," which is currently airing on TRT's documentary channel, Qazi said the project was initiated as part of the Pakistani government's efforts to boost the country's tourism and to introduce the immense tourism potential of Pakistan to Turkish people.

"Recently, Pakistan also liberalized its visa policy, and Turkey is among the selected countries whose nationals can obtain their visas online and on arrival. The people of Pakistan are hospitable and friendly, and they would be honored to welcome visitors from Turkey," the Pakistani envoy said.

Over 150,000 tourists from Pakistan visited Turkey during 2018, while the number of Turkish visitors to Pakistan remained relatively low.

Qazi added that Pakistan is looking forward to increase collaboration with Turkey, which has a "rich experience" in the tourism sector, to develop the country's domestic tourism industry.

Noting that Pakistan has consistently pointed to dialogue as the only way to resolve all outstanding issues, including the Jammu and Kashmir dispute, Qazi said that the ceasefire violations from the Indian side over the line of control continue notwithstanding, which are "a threat to regional peace and tranquility."

"As long as these gross violations continue and as along as the Jammu and Kashmir dispute is not resolved in accordance with the wishes and aspirations of the Kashmiris and the relevant U.N. Security Council resolutions, there will be no peace and stability in South Asia, and the region will continue to jump from one crisis situation to another," Qazi said.

The Kashmir dispute, one of the oldest on the agenda of the U.N. Security Council, erupted between India and Pakistan in 1947 after the end of British colonial rule. The U.N. Security Council called for a referendum to decide the region's fate in 1948. While India says elections held in territories controlled by the administration backed by New Delhi, which decided to back accession to India, makes a referendum unnecessary, the U.N. and Pakistan say a referendum needs to take into account the views of voters throughout the former princely state.

Qazi added that a recent report entitled, "Torture: Indian State's Instrument of Control," released by the Association of Parents of Disappeared Persons and the Jammu Kashmir Coalition of Civil Society, included 432 case studies involving torture and maps trends and patterns showing the emergence of torture as a policy by India against Kashmiris.